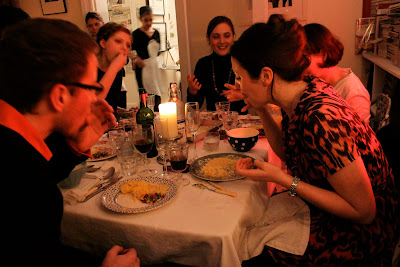 It takes practice, eating with your fingers, to do it with style… but my guests were game 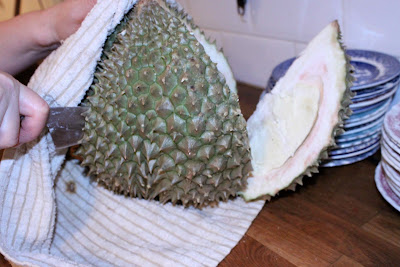 Cutting the Durian, protecting myself from the spikes with a towel… 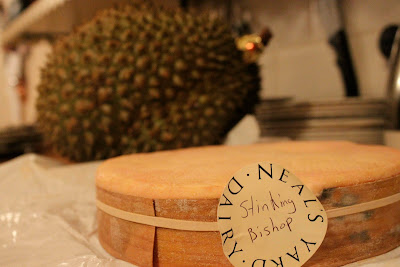 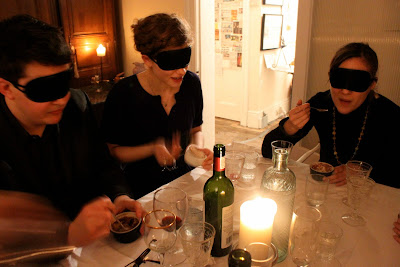 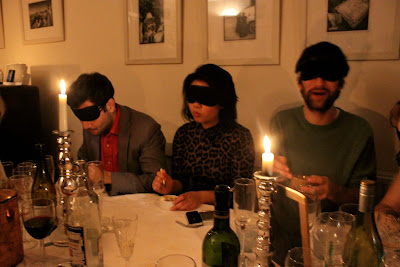 This is probably the dinner at which I would have most liked to have been a guest at my own restaurant.
For the ‘sound’ course my daughter made a seashore tape to go with the ceviche.
The fun really began though with the main course ‘touch’ where I encouraged everybody to eat with their hands, explaining as best I could, the Indian technique. We gave everybody wipes to clean their hands before and after.
I had bought an entire Durian fruit, costing over £30, for the ‘smell’ course. Durian has it’s own export plane and it’s illegal to take it on public transport in the far East. Judging from the reaction at Wing Yip supermarket where I bought the fruit, I was the first Westerner to ever do so. They packed it into a box and taped it down, after having shown me the end where to ‘open’ the fruit. One guest said

“I loved it when you brought the giant mutant conker to the table”.

The inside had the texture of artichoke hearts with a sweet and sour taste. It didn’t actually smell too bad, being quite fresh.
I ‘matched’ this with ‘Stinking Bishop’ cheese which was practically crawling off the cheese board by itself.
At the end I asked everybody to don their masks…the effect was of a roomful of Zorro’s! As we handed around the desserts, I had to place the spoons into guest’s hands. Some had found their spoons but were stabbing around on the table cloth trying to find the ramekin. Comments from guests about eating blindfolded:

“Time slowed down. Normally I wolf through dessert, but this time I savoured the taste”

“I felt vulnerable, exposed. Like everybody else was looking at me with their blindfolds off”
“I liked it. It meant I could concentrate on my dessert without talking to anybody else”
“Because I couldn’t see, I didn’t realise that I could eat the hard chocolate base, I thought it was the bottom of the dish, then I realised I could dig further”

On the hush that descended once the blindfolds were put on:

“I went to ‘Dans le Noir’ (a restaurant in Clerkenwell where you eat in darkness and the staff are blind). There, I noticed everybody talked louder, as if having their other senses deprived meant that they had to compensate.”

One girl asked if she could take her blindfold home, her boyfriend “had plans”.