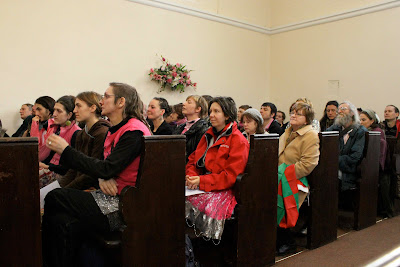 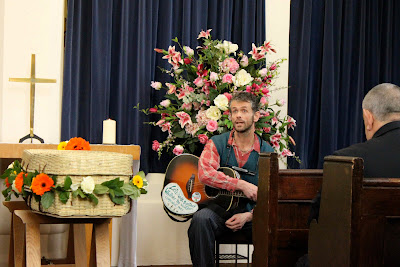 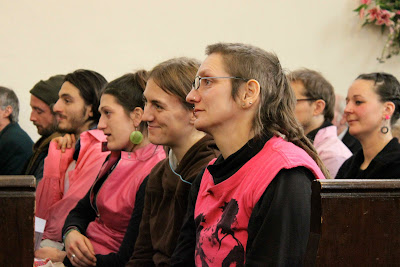 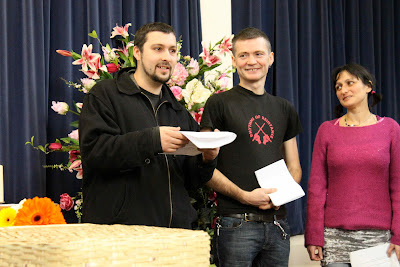 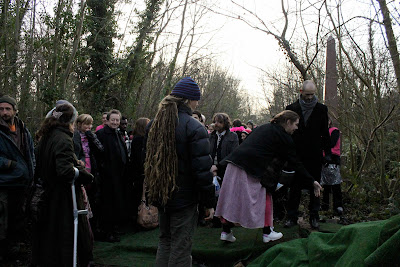 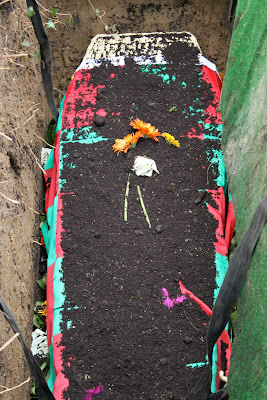 If you are gonna die, cut off in your prime, ravaged by Motor Neurone Disease, then I could not think of a better funeral than that of Val Jones, activist and samba drummer with Rhythms of Resistance. In a band, you often spend hours with someone, in practice, at gigs, waiting backstage, sometimes we were in heavy situations, penned in by the police, at marches or travelling for three days in a sweltering mini bus to a political conference in Belgrade. I never knew Val was married. I never knew her surname was Jones (I thought it was ‘Dazzle’ her activist name). I never knew she went to art school.
In terms of attendance, her funeral was a veritable ‘Who’s Who’ in the activist, alternative political world, the one that you never hear about on TV and in the papers, except as ‘evil protesters’ but which, undeterred by bad press, are an engaged force for grassroots change. Much of the congregation wore pink and silver, the colours of Rhythms of Resistance. Val wasn’t famous, there will be no obituary in The Guardian or The Times, but everybody in that unacknowledged world of political protest was there, celebrating her life.
You know those demonstrations, those protests, particularly against the war in Iraq? You know how marches used to be so dull? And how they have become lively exciting edgy street parties rather than an angry futile trudge past an uncaring parliament to Trafalgar Square? Then again you may have flinched with projected embarrassment at the straggly mohican haircuts, the dreadlocks, the rag-tag colourful anti-fashion freegan outfits and the unpaid ridiculous idealism of scruffy students and dyed-in-the-wool older activists delusionally imagining they can even dent, let alone change, the status quo…
But you can’t deny their hope, their dedication, their concern…nor their sense of subversive fun and sheer bravery.
Much of that is thanks to tactical frivolity…a form of protest which started in Britain with Reclaim the Streets in the 1990s and truly took flight at the beginning of this millennium, in 2000, at the protest against the IMF in Prague. Rhythms of Resistance was formed in London afterwards, the first practice taking place in Highbury Fields. We are now ten years old. RoR were the musical wing of the pink and silver block, samba having always been a form of protest in Brazil by the blacks, former slaves drawing upon their Angolan and Congolese roots, against white landowners.
Val was part of Reclaim the Streets, a non violent direct action collective that would occupy roads and throw a party, briefly preventing traffic from dominating public space. RTS formed a sign language for meetings: one finger up meant ‘I’d like to say something’; both hands waggling in the air meant ‘agreement’; hands forming a ‘T’ meant ‘I’d like to make a technical point with concrete information’; a fist meant ‘I’m blocking this’.
As Val’s colleagues, representatives from the Rossport anti-Shell pipeline protests, carrying the Irish flag, Mark from London Action Resource Centre, playing guitar, somebody from RTS, talked about Val, there was laughter as well as tears and some of us used the hand language to demonstrate agreement.
Val, ever the ecologist, chose a green ending, with a woven biodegradable casket, so pretty you almost felt it could double up as a nice bit of conservatory furniture, and a forest burial at St. Pancras cemetery.
We all formed a line of drums and played some of Val’s favourite samba tunes as she was lowered into the ground.