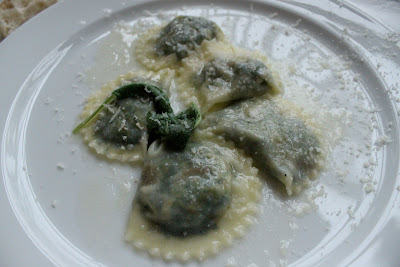 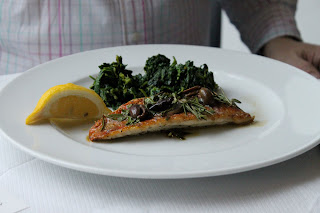 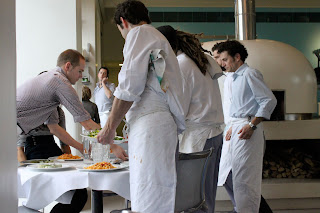 Staff settling down for lunch towards the end of service 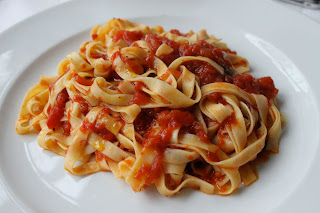 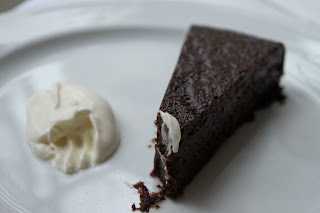 Chocolate nemesis
The food blogger Niamh of Eat Like a Girl had a brilliant idea ‘Posh Lunch Club’ where you try the set lunch menu, generally a good deal, of the really expensive restaurants that you couldn’t normally afford.
@alexthepink put out an invitation on Twitter saying that she had places booked for the set ‘Winter lunch’ (3 courses for £24) at The River Café. I’ve always wanted to go there. Rose Gray and Ruth Rogers, two of Britain’s highest profile female chefs, have opened British eyes to proper modern Italian food, and chefs such as Jamie Oliver and Theo Randall have trained there.
Rose Gray sadly died recently but Ruth Rogers was present on the pass (meaning she checked dishes just before they went out) during service on the day that I went. Her husband, the architect Richard Rogers, who designed the restaurant, popped in to say hello too. This is obviously a very hands on operation. The building is light, modern, with an open kitchen which always inspires trust. It was one of the largest kitchens I have ever seen. How lucky, to have an architect husband who can make your restaurant gorgeous.
Patrick Carpenter, the food and wine blogger of Ostrea Udulis was with us. I was still buzzing from the success of the Underground Farmer’s and Craft Market and probably talked too excitedly and loudly! Especially after a glass of prosecco.
I got there a little late, it’s quite far from Hammersmith tube, so I took a taxi from the station.
My first course was the very simple rocket with parmesan salad. The bread was lovely and soft as was the little dish of grass green olive oil they placed before us.
I then chose a pasta dish of panzotti stuffed with porcini and spinach. Oh my god I simply cannot put into words how divine this was. A white porcelain plate upon which was positioned half a dozen transparent pasta doilys. They looked like vintage underwear, delicate frilly knickers with naughty curly dark bits inside. The panzotti were covered with a butter and sage sauce… I’ve been making alot of fresh pasta recently and to taste these was to taste the benchmark on how it should be.
After that I thought the hell with the segundis I’m just gonna work my way through the primis. I love pasta so why go through the rigmarole of the other courses? I ordered another plate of pasta…tagliatelli with tomato sauce. This was good but a bit, oh I can make this at home-ish. I didn’t order any more pasta. Even I was full.
The others were more traditional and ordered fish and meat. Something else about the River Cafe: everybody looked famous. I don’t think they were, but all the customers looked vaguely recognisable. Was I experiencing fantasy celebrity syndrome?
Ruth Rogers went by and, oh I don’t know what came over me, I stopped her in her tracks, introducing myself. She was polite and I gave her my card. She probably gets this all the time.
The waiter was very tolerant. Even when I made the mistake of not ordering the chocolate nemesis. Again, I’m not a chocolate pud kinda gal, but this was so light, and counterbalanced perfectly by creme fraiche from Neal’s Yard. I order the almond icecream, and it wasn’t that great. It was a bit dull. Like nougat without the sweet honeyed bits. I told the waiter. I suggested, suddenly inspired,

“it needs something like…a bit of chopped up white toblerone”.*

The waiter snorted at the fact that I was telling this Michelin star restaurant how to improve their icecream. He said, between mildly gritted teeth…

He brought me a free dish of caramel icecream which tasted like tarte tatin without the apples. You know, the gooey burnt caramel bit. Very nice.

By the time I’d ordered dessert, coffee, a glass of Prosecco, my bill came to £44. Not cheap by my standards. It’s such a shame that food of this quality is not more affordable. But anytime I get a chance to go to a posh resto, taken by someone else preferably, I’d definitely ask to go to The River Café.
Patrick has a booking for the new Gordon Ramsay restaurant Petrus for five at 12.45 on the 12th of April. It’s about £25 for the set lunch. Anybody want to join us?
The River Café
Thames Wharf, Rainville Road, London W6 9HA
PS: I haven’t abandoned this blog, it’s just I’ve been so busy. I have a massive backlog of restaurant reviews. I’ll get round to it at some point…
*Anybody know where to get white toblerone? Except on a ferry? Cos if River café don’t want to take advantage of my genius new icecream flavour, well I certainly am!