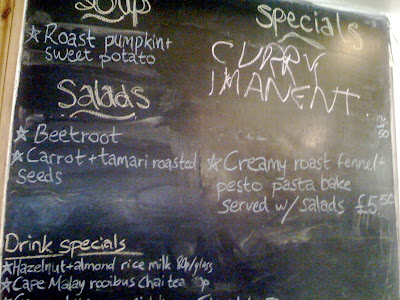 or Pogo cafe and the separatist independent state of Hackney

Some of you who have been reading my other food blog The English can cook since the beginning of time will know that I used to volunteer at a vegan cooperative cafe called Pogo. It’s in Hackney. I have a theory about places without the tube: they are different: self-administering, land-locked, incestuous, tribal.

People who live in Hackney don’t leave their postcode. People who live in Hackney tend only to socialise with other people in Hackney. Unless you happen to be passing by. Which is unlikely. (Unless you are on the way to Norfolk, and we all know what they are like).
You really have to make a special effort to visit. You have to wait in the cold and get a bus or brave the dark stations of the North London Line, an overground train that theoretically comes once every twenty minutes. This route used to be called the Freeline, pre-Oyster card. Nobody paid. Like hobos in depression America, you could jump a train.
To cross North London from West to East and back again, is the toughest direction of travel in the clusterfucked tube map, which is constructed primarily to enable people in outlying boroughs to get to the centre to shop or work.
This has the effect of skewing social and fiscal interaction in London villages (for that is what London consists of, a sprawling collection of hamlets, it’s not a cohesive town like Paris, with intramuros and extramuros being as clear as jail, i.e. all the poor people locked out in the banlieu, la zone).
Pogo is located between Clapton and Hackney and probably encapsulates everything that is good about that area apart from the murder rate. It’s a cooperative venture. Nobody gets paid. The food is organic, fairtrade and vegan. It has sofas and free internet and two computers for public use.
The ‘customers’ are a mix of mohicaned punks, activists, animal rights campaigners, lesbians, gays, transgender people, care in the community slightly mad people, old musicians, ex-addicts, mums and their pushchairs from the local council estate and even the odd businessman stopping in for a soya mango shake on his way home from work.
To the average passerby it might seem a little intimidating. But you soon learn that there everything is cool, everything is permitted, everything is possible. I’ve lain on the sofas for hours, clutching my broken heart, trying to dull the pain of rejection on many occasions there. In fact I started to work there during a period when I’d been dumped a couple of times in a row. I found the chopping and cleaning and stirring and baking a soothing routine.
I’m not a vegan. The food is a bit up and down. Sometimes it’s squat slop. Other times it’s exquisitely fresh, original and creative. You are limited to cooking with whatever Growing Communities delivers which can mean months of cabbage and beetroot. It’s hard-core aggressively seasonal, and will force invention upon a cook to conjure up new dishes with the same dull ingredients. But it’s all cooked with love.
Pogo is as much community space as food outlet. There are books to borrow or swap, discussions, meetings and film night to be held. My Gay Best Friend, the Maitre D’aft, was Front of House. This is how he talks:

“Goddess willing. She-mail me. Will you cook me g/f food? By that I mean gay friendly. I’m cunstantly hungry.”

He will deliver radical puns at a breakneck pace, trill witticisms with verbal dexterity, flashing black eyes from his rail-thin carcass. It’s as if Oscar Wilde were reincarnated as a crack-head Jewish boy from Dollis Hill. He left home and whacked through his inheritance, mostly on drugs and boys who did not return his ardour. D’aft can speak and write Hebrew. He lives in a tent in someone’s back garden.
All this is over now. There has been a coup. Some freegans (definition: people who will eat anything as long as it is free) collected food, including meat, when the freezers from the nearby Somerfield supermarket broke down. Rather than let it go to waste, they stored it in Pogo freezers in the storage garage. None of the meat was used in the cafe.
A group of volunteers grew angry about this. Pogo cafe is one of the few activist vegan cafes in London. The debate became Freegans versus
Vegans. The vegans threw away the meat.
At a surprise and secret meeting last week, organised by someone who hacked into the Pogo café email data, the core group of the collective , under attack for allowing this to occur, resigned en masse.
There followed a lengthy, shocked and informative debate on email and a long thread of comments on the Pogo blog (now, sadly, deleted, as they try to eradicate their bloody beginnings?). Accusations were thrown around. Some of the quirkier, more characterful people like D’aft were pushed out.
I support so many of the principles that Pogo was founded to promote: ethical eating, self-help, self-responsibility, democracy, equality and keeping it local.
When I cooked there, there were cliques and I had a few fights, mainly because I’m the boss in my kitchen, no matter how temporary, and that was deemed to be in contradiction to deciding everything on a consensus.
The fact that most of the other staff seemed to be sleeping with each other (I was excluded on grounds of age and family responsibilities) didn’t help. But there was humour and craziness: one waitress said she was accosted outside by an unknown local asking for urine, “Please I need a clean sample to give to the police”. Only in Crackney. (She was willing, but had to admit her urine wasn’t ‘clean’ either).
But I can’t help being amused by some of the debating points, like this from one founder member: “I wonder why the co-op member questioned did not feel uncomfortable about the animal corpses in the fridge? Would they feel comfortable if a murdered human corpse was kept in the fridge? I’m assuming they wouldn’t, which underlies a speciesist attitude that as a vegan I am fighting against.”
(This reminded me of the time there was a mouse at the cafe and we weren’t allowed to trap it.)
Others railed against the ‘vegan police’ and while acknowledging that keeping the meat was a mistake, that the core co-op had ‘over the last few years… worked incredibly hard doing incredibly boring things – accounts and orders cleaning etc.. not fun and not quick. Their motivation was not money – as no-one is paid, if you think that they were intoxicated by power (the power to clean the toilet in the early hours perhaps?) then just stop reading now, you’re too far gone. ‘
This blogger talks about his disappointment with the “massive vegan shit storm” while Alex Bourke, editor of the Vegetarian London guidebook, wrote: “We should not forget why veganism is fundamental to ecology, equality, sustainability and social justice for humans and all other animal nations.”
Three months later: the original collective was overturned, the new collective has been installed. Some of the newbies have now realised that the “hierarchical” original collective actually did the donkey work and that running a cafe, no matter how anarchic and freestyle, is pure labour. The originals have moved on.
Last week was National Vegetarian Week. Many ‘foodies’ on Twitter regarded this as an opportunity to take the piss. My own position is that if an animal has died to feed us, it’s only moral that much of it should be used, snout to tail eating, but there are increasingly good vegan and vegetarian restaurants out there… and this is the future, whether you like it or not. 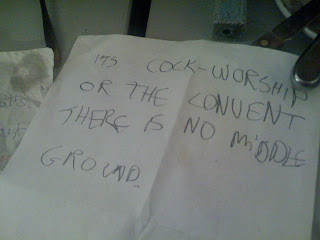 “It’s cock worship or the convent, there is no middle ground,” saith the Maitre D’Aft.