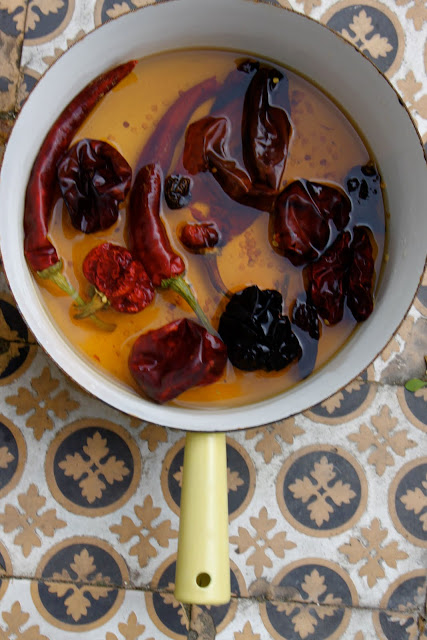 The lack of decent salsa and hot sauce in this country led me to emptying local sauces into plastic water bottles (during my trip to Mexico and Guatemala in 2008) and bringing them back in my suitcase. I’ve been eking them out while searching for adequate brands available in the UK.

None of the fresh salsas sold in the shops, even the organic stores, are any good; too sweet, no lime, no fresh coriander. They are more like cold tomato sauce for pasta.
I still haven’t found a chili sauce worthy of it’s name. I tried Cool Chilli Co. chipotle ketchup (smoked dried jalapeno peppers): too sweet, like chilli jam. A’wing’ sauce I bought at last year’s Taste of London festival was not too bad, using habaneros.
I’m on a constant quest for hot sauce: from the States I bought a popular brand ‘Emeril’s ‘kick it up’ Green Pepper sauce’ made from Jalapenos. I particularly like green chili sauce but it’s hard to get a good one. I once found a fantastic specimen in a local Indian shop, but two weeks later, having eaten it on every meal, even on toast in the morning, they then stopped stocking it. I didn’t even note down the name!
Green Tabasco is great but has little body, while Wahaca’s Habanero sauce is just too hard core for me.  Freshly made ‘harissa’ bats shop-bought off the field, sambal oelek and Piri Piri have their own qualities. I have hot sauce friendships, where we compare the different tastes, exchange bottles and discuss the slightly uncomfortable end journey of chilli sauce through our bodies. It’s an addiction that releases endorphins: no pain, no gain.
A good sauce is not too hot, not too mild, has a fruity vinegary quality and if using chipotles, a profound smokiness.
I imagine most kitchens have a mystery jar or a hanging garland of dried red chilli’s thick with dust, lurking about.
Of late I’ve been experimenting with the paprika-like Nyoras (or ñoras), a non-spicy red pepper from Spain, used by Rachel McCormack of Catalan Cooking to make romesco sauce. I’ve also used guindillas (a little spicy) and chorizeros (deep and earthy), both available from Brindisa.
I’m hoping Thomasina Miers will give food bloggers a chilli workshop so we can discover more about each type. Her wonderful book ‘Mexican Food made simple’ sets out a few chillis commonly used in Mexican cooking: Chile de arbol, very hot and similar to Pepperoncino, Serrano, with a “fresh, grassy, hot flavour”; jalapenos or the smoked dried version ‘chipotles’, mild; poblanos or their dried cousins ‘Anchos’, mild, similar to Spanish dried peppers; habanero or scotch bonnets, the hottest.
Botanically chillis are berries, but for culinary purposes are either vegetables (bell peppers) or spices. I think it’s important to get the right one; tiny birds eye chillis, for instance, are perfect for Thai food.
So, having run out, I’ve simply had to make my own:
Some mystery dried chillis, soaked in 500ml hot water, deseeded and de stemmed. Keep the water.
50g brown sugar
1 tblspn of Ground cumin
1 tblspn of Ground coriander
6 or 7 tomatoes
100ml of either cider vinegar or red wine vinegar
Salt
Boil the lot together. whizz up in the food processor. Strain into a bowl. Bottle. 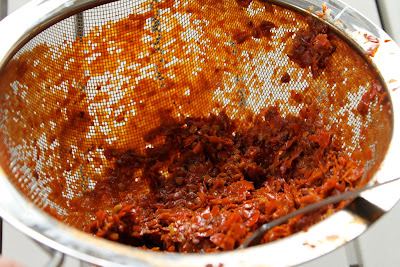 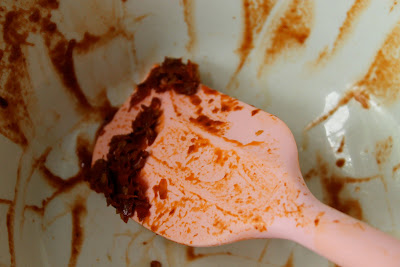 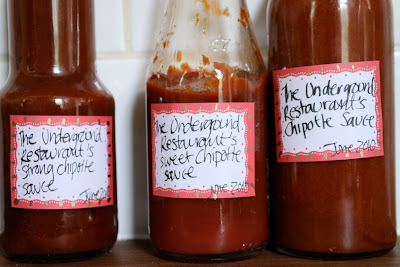 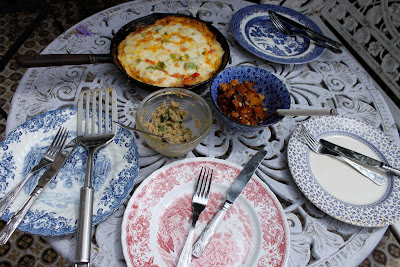 Use on huevos rancheros on a sunny Sunday morning…