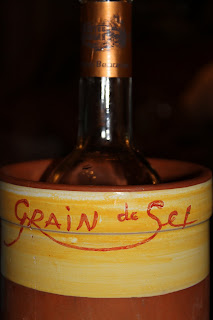 Grain de Sel, one of the best restaurants in the area, the Ottolenghi guys rate it.

Chef Philippe Audibert at work at this chic mom and pop operation. 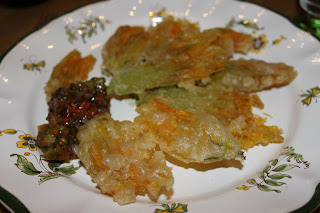 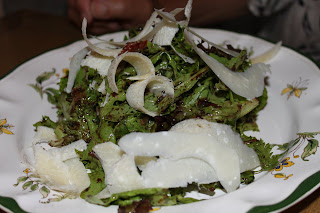 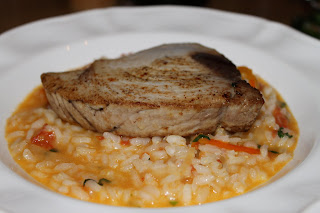 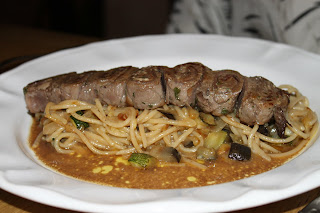 Meat coiled around in medaillons, can’t remember name of dish, on spag. 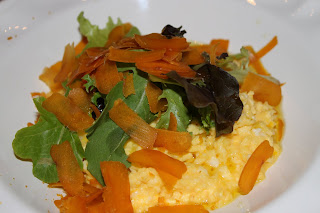 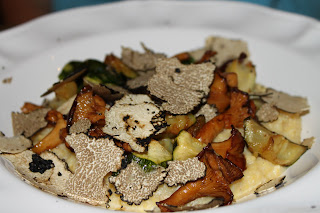 Creamy soft polenta with shavings of truffle and golden chanterelles 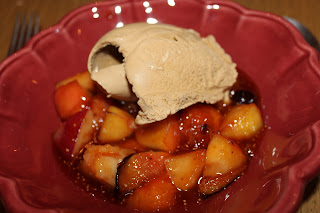 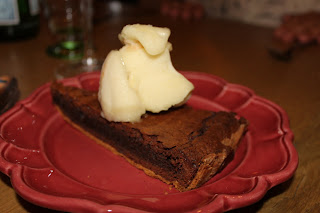 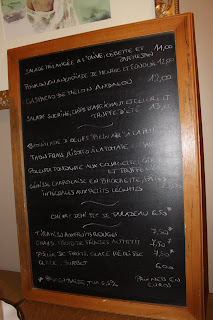 Or Prairies de la Merde as some call it. I lived there in a mobile home for four months, yes, for a while I was trailer trash. I enjoyed every minute. No housework, five minutes from the beach, ‘La Boheme’ or ‘the Bo’ and the other English pub ‘Monroes’ (I’m sure the eponymous Marilyn herself would have loved this joint) a quick cycle ride away… what’s not to like? In the summer, there was nightly entertainment, karaoke cabaret singers in the open air stage, rumbling through the site. Never a dull moment, living in a holiday camp. I, of course, was treated like the local witch, what with being a single mum, a suspiciously light drinker, and known to ‘read books like’.

“You should go out with Rupert!” said Cheryl’s live in partner, an enormous Scouser who had a formidable appetite for coke (powdered) and beer.

“He’s got like, um, how big is it?”he hesitated, a builder’s imagination in his mind’s eye at work “ooh a shelf, about 2 foot long, with…books. You’d like him. You’d get on”.

I met the unlikely named Rupert, the local taxi driver, who knew all the back roads to Saint Tropez, a useful bit of knowledge when the main linking road (N98) from Cannes to Toulon is one long engine-busting traffic jam from June to September. He had all the security codes for the private roads see. Rupert, a pudgy guy from Portsmouth, his brain a little fried from a decade on E at South Coast raves, didn’t believe in fiction.

“I only allow reference books to be on that shelf”.

We weren’t destined for each other. He was also extremely narrow minded at Scrabble, refusing the Scottish ‘Aye’.

Cheryl, even in her 40s, with the thickened middle of a woman who spent every summer churning out tourist snacks, gargling her constant companion, a pint glass of Malibu and pineapple that staff kept topped up, was a pretty woman. She drank like a professional. She worried about her two feral daughters growing up in the campsite. Cogolin is the local town, the nearest to a real place down there for it’s open all year (rather than just being a picturesque backdrop for tourist season like St. Trop). I knew every bar, every shop, every restaurant, every stall on market day (Wednesdays) in brain dulling detail. There was one health food shop, one boutique where you could buy cheap bags and heels, one friendly bar run by Arabs next to the cinema, one other bar next to the hardware shop which sold frying pans with holes in the bottom, soon to be revealed as chestnut roasting pans. A thrill would be a stroll around Leclerc, fingering French stationery, gazing at espadrilles and a rosé in the bar opposite.

Janey, Cheryl and I would meet there on school days, during the long unemployed winter of 2005. Janey had a mysterious boyfriend who we never saw. We heard stories, he was building villas in Cheshire, he was busy, he was travelling, but he adored Janey. I saw a photo: he looked unfeasibly young and good looking for Janey, a raddled blonde who talked of her son, the “golf professional” and her ex-husband, the millionaire dentist. The son crashed her cars and the ex fucked off with a trophy dental assistant. Janey lived on the RMI due to a bad back and could never stand her round.

One day Janey showed me a handwritten letter from this guy, full of sweet nothings “See how he loves me!” she cooed.

After a few months of this, I finally broached the subject with Cheryl: “Erm this guy, is he in prison?”.

Cheryl was shocked “How do you know?”.

“Well who else writes letters? I mean, when we have email?”I shrugged.

Anyway they were all criminals in the South of France, Graham Greene had it about right.