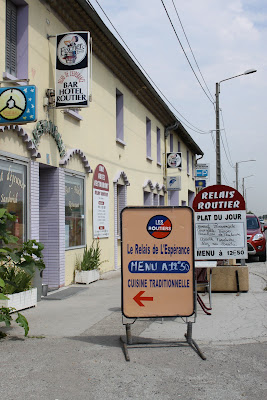 I tend to drive when I go to see my parents in the South of France. It costs me more than flying or the train but, despite the marathon sessions at the wheel, I get to discover a little more about the country, visit unknown corners and most importantly, pick up French vintage kitchenalia, furniture and linen.
This time I drove off the ferry (apparently giant sweets such as Toblerones costing £47 or outsize Chupa Chups are popular duty-free presents, it’s also the only place you can buy white Toblerone) via Passavant La Rochère in Les Voges, a little known but very pretty area of Eastern France on the border with Luxembourg and Germany. It was a bit of a detour but I’ve admired this factory’s glassware for some time.
Driving through the green, cow dabbed hills, through small villages, each of whom had made the effort to fill window boxes and wheelbarrows garnished with flowers, each house accompanied by a long pile of wood jigsaw-stacked outside for the winter, I got lost a few times. I arrived at La Rochère factory fifteen minutes before closing time. Staggering in there, my dress damp from collected sweat in the driving seat, I panted ‘Please don’t close, I’ve driven all the way from London’. I bought 9 boxes of pressed glasses, modelled on various vintage 18th century designs. It was cheaper than buying from websites that specialise in vintage French goods, but probably not enough to make the petrol and tolls worthwhile. What I like about these glasses through is that not only are they pretty, fit in with The Underground Restaurant’s shabby chic decor, but they are sturdy and do not break easily.
I continued for another hour or so then stopped opposite a church at a little oak beamed restaurant. The menu, 22 euros, three courses, was simple but cheap. I had a kir aligoté to start, the local white wine with crème de cassis, and a tomato and poached egg salad. For the main course I chose trout with gratin dauphinois and ratatouille. The trout and dauphinois were good but I think the ratatouille was tinned. It’s disappointing how many French restaurants today use frozen or tinned goods, so different from my childhood when my family drove through France each school holiday. Dessert was pannacotta with a sharp berry coulis. An ordinary French meal, decent and workaday.
I grew suddenly so tired that my arms could no longer lift the knife and fork, I paid with my carte bleue and clambered into the back of my small white van. Yes I am a white van woman. It only cost £350, has no air-conditioning or power steering. I’m on my third white van. Other drivers behave differently, more aggressively with white vans, and I can see male drivers in London do a second take seeing a woman behind the wheel.
It started to rain hard, I covered myself with a sleeping bag and slept. On waking, feeling completely refreshed I realised it was still only 1 am, so I drove on through the rain to the autoroute. The most expensive autoroutes are between Dijon and Lyon and Aix en Provence. You can end up spending around 100 euros on tolls but when the weather is bad I don’t want to negotiate the stop start of the more scenic Route Nationale.
One of my favourite things about travelling in France is the petrol station shops: I can spend hours looking at the books, the specialités de la region and a particular fetish of mine, the truck driver’s section. These macho men like to buy velvet curtains for their beds, tables to hang on their steering wheels, stickers of sexy truckin’ girls and have an array of electrical goods that they can run via the cigarette lighter: kettles, coffee makers, small ovens. I have visions of burly lorry drivers, kings of the road, parking up and making teensy grilled cheese sandwiches in their mini ovens. 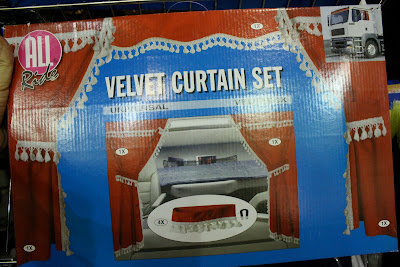 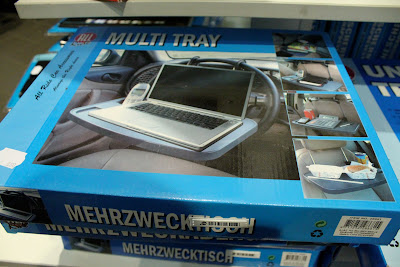 Just what we all need: a table we can attach to our steering wheel 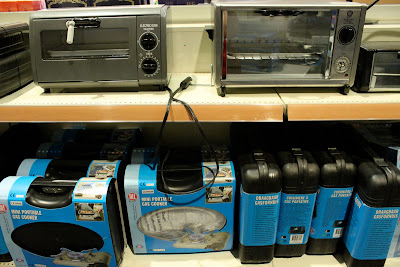 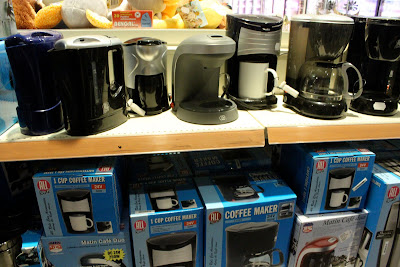 These all plug into the cigarette lighter. 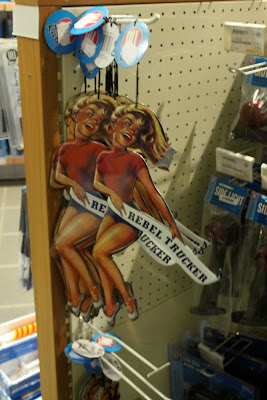 South of Lyon, the weather changes, the sky thins out to blue and the air is arid. I wend my way through Montelimar, home of French nougat, which boasts something called the Le Palais des bonbons, an international museum of sweets. I must check this out I thought. Parking up, I approach the doorway, it’s already obvious from the plastic life size mannequin of a woman in ill-fitting historic clothes that it’s a tacky waste of time, visited only by desperate parents seeking to anaesthetize their children for a few hours en route. Christ, if this is the standard of attractions, I could turn my back garden into a museum of say, er, Irish pubs, something vaguely Kilburnish, with a few ‘tableau’ of ginger haired men clutching pints of Guinness and charge people to see it. (Don’t encourage me).
I press on to my parent’s house near Grimaud. I spent a year down there. I’ve written about it quite extensively. It was one of the most boring periods of my life. Altogether I’ve lived seven years  in France and probably visit at least once a year. I’m sure I was French in a past life (that’s another story). I have a love/hate relationship with the French. 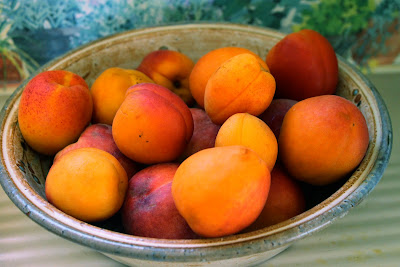 At this time of year, the Cote d’Azur is hot, dry and traffic is so bad you daren’t leave the house. This year, after the spring floods in Draguignan, there are also a plague of mosquitos. I generally spend most of my time cooking, swimming and visiting flea markets. My teen and my neice, both 16 years old, were there already. My neice, whose mum teaches Home Economics, is an enthusiastic cook. They decided to play Come Dine With Me and make us a three course meal, of a far higher standard than most of the restaurants down here. It took them both most of the day to make.
This took me back to one of the most memorable meals. When I was eight years old, we drove to Minori to see the Italian side of the family. My father’s godfather turned out to be the mayor of the village. He took us to a darkened restaurant, the best in the locality. The godfather wore a crisp white shirt, a tailored dark suit and gold glinted about his cuffs. The small finger on his right hand had a long curly nail. This was an Italian peasant’s way of saying: I don’t have to work the land. The waiters lined up as if it were a royal visit. Nobody kissed the godfather’s ring but it wouldn’t have been out of place. As we left, my brother piped up:

“Dad, I like this restaurant, we don’t even have to pay!”

My parents hushed him. A few days later, we were invited to the godfather’s house. We had to climb a small mountain of lemon groves; the lemons were half a foot long, with thick knobbly skins, you could eat them straight off the plant. I remember being so thirsty as we made our way up the dusty lemon grove. The crickets were deafening as the sun beat down. At the top we were welcomed by the widowed godfather’s two 16 year old daughters, twins I think, who had made us dinner. This time the godfather was wearing a white vest and blue work trousers. This dinner lasted for hours, they had pulled all the stops out: antipasti, pasta, a seafood course, a fish course, a red meat course, a white meat course, salads, vegetables, cheeses, puddings. It was the first time I had cannelloni, home-made into large stuffed rolls by the young girls. It was a tremendous feat, this banquet, especially by such young cooks. We didn’t speak Italian (they spoke in dialect) and they didn’t speak English. Food was the means of communication. After a few courses, we were struggling; my brother saved the day by groaning and clutching his stomach. At first the girls found this funny and offered him camomile tea but eventually his cries grew so loud and insistant that we had the excuse to leave. 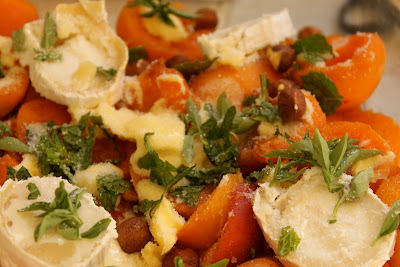 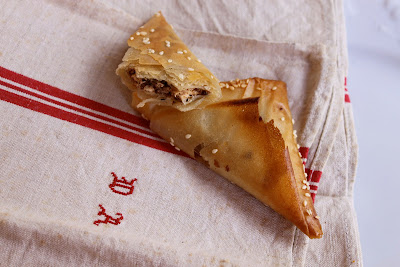 Crispy triangles made with ‘brik’ a North African fine dough. 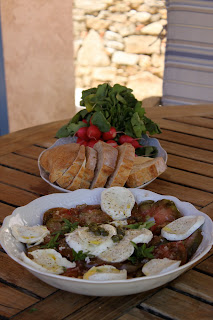 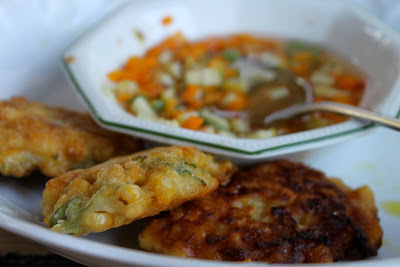 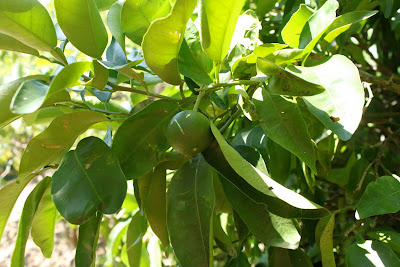 Grapefruit tree in my parent’s garden 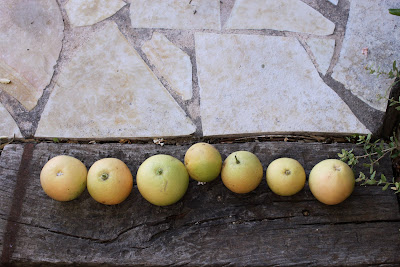 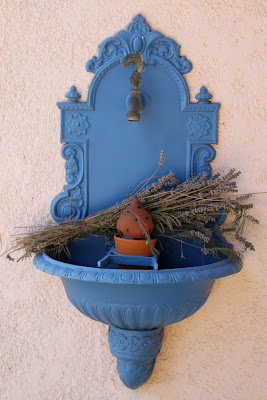