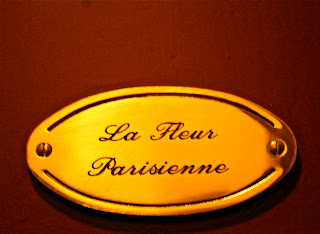 A discreet plaque at the door in the Hidden Kitchen’s elegant Parisian apartment in the 1er arrondissement, all high ceilings, chandeliers, pale paintwork, marble fireplaces. 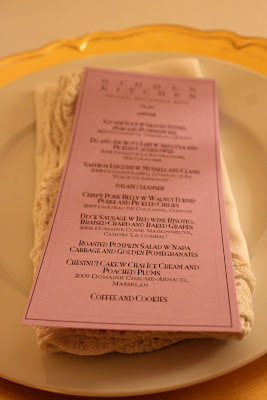 The napkin was delicate lace, too good to wipe your mouth on. 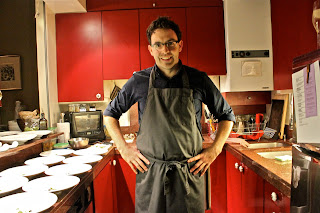 Braden the chef in his red kitchen. 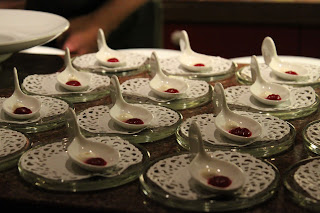 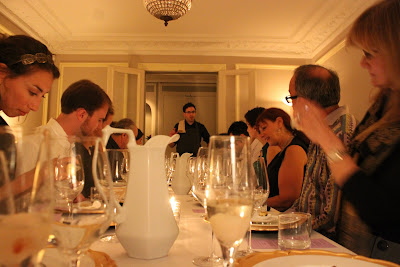 Braden came to the tab between each course to explain it. I tend to talk through the meal at the beginning, which I think works better as, by the 4th or 5th course, people are too drunk, engrossed in conversation, to listen anymore. See that beautiful Natalie Imbruglia lookylikey on the left? Danielle runs Whisk and Ladle in New York, another supper club. 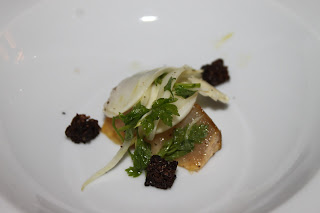 I started eating this, not realising the soup was about to be poured at the table (a good idea, prevents soup spills from kitchen to dining table) 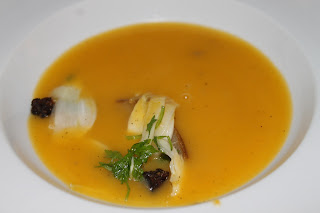 So yeah, it’s a bit messed up.
Squash soup with shaved fennel, pear and pumpernickel. 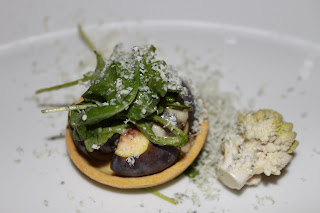 Fig and anchovy tart with arugula and pickled cauliflower 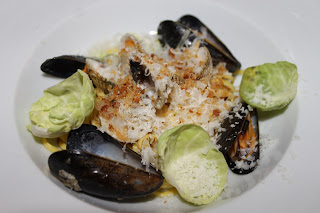 Minute but exquisite: saffron tagliatelli (with a hint of vinegar), mussels, clams and brussel sprouts 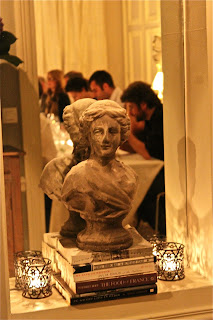 Palate cleanser, not pictured. Thought I’d give a shot of a bust instead. 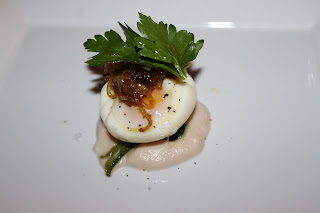 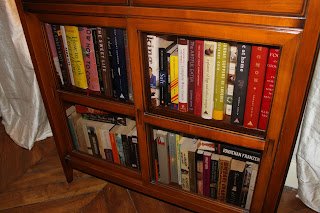 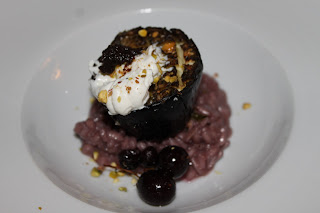 Aubergine on red wine risotto, braised chard, a rich earthy taste and the grapes contrasted with a sweet sharpness. 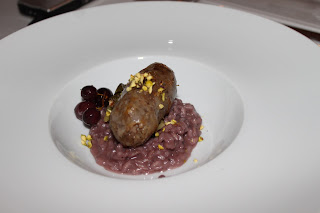 The meat version of my aubergine course. Duck sausage. 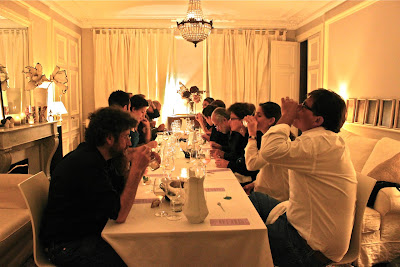 It felt like Babette’s Feast: everybody tucking in and drinking with great concentration, trying to savour each taste. 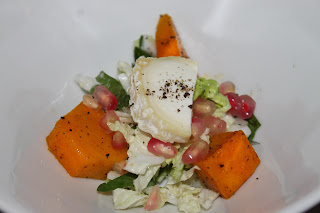 The cheese course was interesting: a goat’s cheese, butternut squash, Napa cabbage and pomegranate salad. The French often used to eat salad with the cheese course towards the end of the meal. 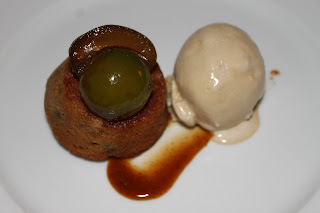 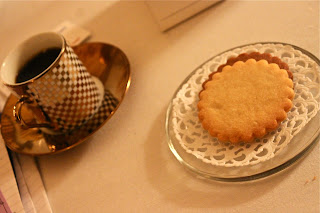 Coffee and biscuits. For me this was the only false note. Perhaps it’s an American thing to have biscuits at the end of your meal, but I think chocolates would have been better. 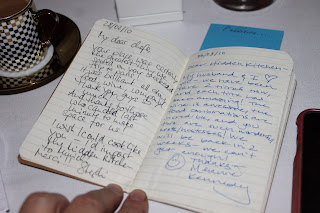 Little visitor booklets were handed around with a flap to put your donation. Another nice touch which I may copy. I have a visitor’s book but people mostly forget to write anything while they are on their way out to catch the last metro.

Braden and Laura moved to Paris in 2007. Their day job is hunting down new and exotic food stuffs for Wholefoods and Williams Sonoma in the USA. Their website says that they originally thought they’d do a supper a month to make new friends. Rave reviews in top French food blog Chocolat and Zuccini and the New York Times meant, however, that they now do around 6 or 7 suppers a month. It’s not cheap, certainly, at 90 euros, wine included, but their waiting list is incredibly long. The day after the Chocolat and Zuccini review, they received 1500 booking requests. I booked for this dinner about 7 months ago.
The guests tended to be wealthy Americans, with a sprinkling of French guests at the other end of the table. Braden told me that one night they had a Saudi prince as a guest, who insisted on paying the bill for the entire table.
“But some people have paid in advance” protested Braden.
“Then tear up their checks!” declared the prince.
He also left a 300 euro tip. (NB: He’s welcome at my place anytime).
They’ve had at least two marriage proposals there. I can understand that. It’s really a beautiful evening, a true occasion. The chic apartment is in one of the best areas of Paris, near the Louvre, a far cry from my six years slumming it in the 20th.

As readers of this blog might know, my feelings for Paris are mixed. On Friday, when I alighted from the Gare du Nord, I burst into tears. My memories of this town are of leaving in the middle of the night, baby in tow, as I discovered my French partners’, who I thought, godammit, was my friend, numerous infidelities. Humiliated, I drove to London and begged my parents if I could stay with them although we hadn’t spoken for two years. A month later, chastened further by the fact that the French man, l’histoire de ma vie, had not even bothered to find out where we were, I drove a van to Paris and let myself in the early hours of the morning, after I saw him leave for work, while my dad waited downstairs. The French man had demanded that I move my stuff but, my little protest, I hadn’t told him which day it would be.  I was shocked to discover women’s jewellery, used condoms in the bed and a letter from the Mairie telling him that now he had broken up his family, he was now being awarded a rent-controlled HLM (council flat). I broke down, shocked to the core. Nine years. My dad came up, to find out what was taking me so long. My American friend Troy from the fac (university) and my dad hauled out all my furniture and belongings. The apartment was almost stripped bare. Why? Because I had bought everything. I was useless in the move, hysterical, a hunched drawn creature, speechless with grief. Still, I lost a ton of weight that month. Divorce and India, the best diets.
But you can see, I don’t go to Paris as a tourist. I know Paris. I’ve had love affairs, relationships, abortions (oh those Catholic doctors really really don’t like you if you do this, your internal examination will be brutal), childbirth, illnesses, paid electricity bills, used a Minitel (remember those?), tried to join evening classes, shopped, shouted, cooked, avoided the jewelled mosaic of multi-coloured dog poo on the pavements, made some friends (and believe me, the French ones have not a drop of sympathy when you split with your partner: “he was infidel? et alors?”), made films, watched films, had exhibitions of my photography, visited every museum and gallery, including The Museum of Bread (complete with pieces of Egyptian bread…er bits of charcoal). Three months after we split, I returned again to Paris, on my own, to collect my ‘license’, my degree in cinema from the Sorbonne. I spent six years living there, and my overwhelming feeling was that I hadn’t existed there. Paris had touched me but my relationship with that city and with that man was not mutual. It never was.