“I think everyone should know everyone” says Jim Haynes, the septuagenarian host of Paris’ and possibly the world’s oldest supper club. Every Sunday night, for 31 years, Jim has opened his 14th arrondissement atelier to anyone who rocks up and wants supper.
The food, while good, is not the point. Jim doesn’t cook it, in fact on this occasion his helpers, a shrugging Irish ex-pat and some of Jim’s battered old drinking buddies, admitted they bought it in from a Greek deli. Nor is the decor, the service, or the seating, the point. There is no service, you queue up at a red checked table for food; there is no seating, you stand around with sixty other people in a tiny space, holding your plate and glass.
Jim, wearing an apron with the words ‘JIM’ sewed patchwork style on to it, perches on a stool next to the table with a pile of recycled envelopes and a clipboard, ticking off names and accepting ‘donations’, a minimum of 25 euros each is suggested.
Every so often you hear Jim call out: “Who knows Linda? Come meet Linda from Iowa”. Linda stands there, an uncertain smile on her face, waiting to see if anyone responds.
Outside, on a wall, is a stack of alcohol: boxes of red, white, rosé, bottles of beer and some soft drinks adjacent to a tower of plastic glasses. You serve yourself.
The guests are mostly Americans: “You were on public radio” one says to Jim, who has become a station of the cross on the European pilgrimage for the ‘if it’s Sunday it must be Paris’ style tourist. They arrive in packs, off coaches, one has the impression. Dinner starts at eight, finishes by eleven, but most of these guys are gone by 9.30. That’s the American way, eat fast and go, been there, done that, tick.
Jim, I’m sure, would have no truck with this kind of snobbery.
Tired for it was the end of my weekend in Paris, my spirits dampened by the rain, I stood alone much of the time, too weary to do anything but observe. Jim, ever the host, wanted to introduce me to people “Here’s Karen! Who knows Karen? Come meet Karen” which would have been sweet if he’d remembered my name properly.
Eventually, I sidled up to Jim and hissed “Look I don’t want to meet anybody. Ok?” Jolted out of his yankee bonhomie, he looked at me strangely.
I suppose I dreamed of late into the night riffs about Free Love, International Times, Suck, the Arts Lab, Mai ’68 with Jim. Of course it was a ridiculous notion, when he’s working. On the wall, there was a notice “Jim’s plan: stay at home and get paid”.

Jim was also selling several of his books: ‘Everything Is! Soft Manifestos for our Time’ and ‘Thanks for coming!’; the latter contains a fuzzy black and white photograph of our Jim, sexual liberator, receiving a blow job from a long haired dolly bird captioned ‘Suck editorial meeting’.
It also contains letters: sweet notes from Norman Mailer and Samuel Beckett,  a very angry typewritten missive from Germaine Greer, complaining about a nude photo of her being used as the cover of Suck, a fawning love letter “How can I criticize someone who has no faults” from Jay Landesman (father in law of Julie Burchill), a questionnaire from Shere Hite, and a full 20 pages of dedications. He was part of the underground scene in the sixties with Allen Ginsberg, Caroline Coon, Heathcote Williams; he also knew Buckminster Fuller, Kenneth Tynan, John Lennon and Yoko Ono. In fact there is almost no one in the counter culture, from Mick Jagger to Charles Bukowski that Jim hasn’t met. At one of his dinners, Robert Crumb drew on the paper table cloth.
He started Project Eats at his present address in 1973.  Later on this address became the ‘consulate’ for ‘world passports’, beautifully produced documents, bound in blue with a gold map, in seven languages; a project Jim did with Garry Davis. These passports actually worked for a while; one person managed to cross 13 borders from Asia to Europe with a ‘world passport’ until the French authorities threatened to deport Jim if he refused to desist. Although I note that the wikipedia link neglects to mention Jim.
Thirty years later, having perhaps found his true metier as the original social networker, James Haynes is recognised as the pioneer of Supper clubs. You’ve got to hand it to him, still perched on that stool every Sunday night! 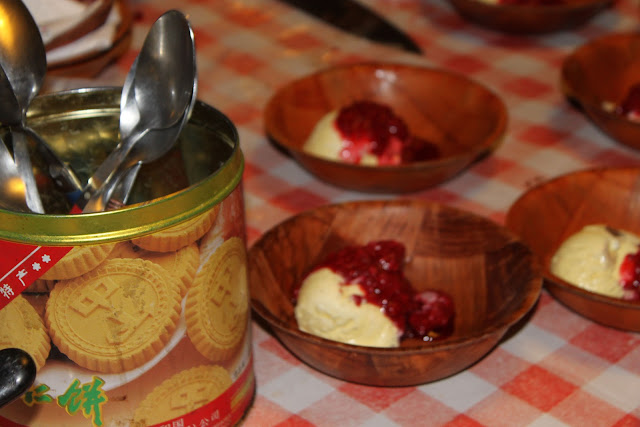 Gnomes on the balcony

Previous Post: « The #ufcm in The Grocer
Next Post: The London Restaurant Festival Menu ‘Pygmalion’ in pictures »

The best thing about this meal I made on Sunday wa

Beetroot cured salmon. It takes a couple of days.

Playing around with one of my photo backgrounds fr

In my parents street for Christmas Day. Happy Chri

Bergamot madeleines. These are quick to make and y

Look how well my paper white narcissus are doing?

Home sweet home. My own cooking, my own comfort fo

Souad works at the spa. Every couple of days she m

Abdul leading me to my first dive in years. I’ve

Overnight cardamom rice pudding made in the Aga. I

The travel journalist @whattravel made me this bea

Bonfire night recipe from v is for vegan. Wild mus

From my book V is for vegan, ripe plantain & chill

I made a little succulent display from plants I bo

It’s such a warm October. The chillis are still