I don’t know anything about Russian food. But near to the anniversary of the revolution, it seemed like a good opportunity to put myself to the test and attempt to come up with a Russian menu. To overcome this minor handicap, I enlisted of a fellow food blogger, the beguilingly beautiful food anthropologist Katrina Kolleagava
Together we visited Russian restaurant Bob Bob Ricard in London’s Soho. We met with owner Leonid, and got the grand tour. This restaurant is an absolute must visit, for the decor alone. The walls are papered with hand-painted Japanese book paper. Upstairs you sit in comfortable booths with a brass button you can press to call for champagne. Downstairs is even more bizarre: it’s reminiscent of the inside of a railway carriage, perhaps the Orient Express, with brass fittings, small reading lights and coppery champagne buckets attached to each table. The attentive staff look like extras from the movie ‘Brazil’, slightly odd, with asymetric hair cuts, jutting slavic cheek bones, tightly bound in tailored turquoise. Time shifts at Bob Bob Ricard… one feels as if one is on the altered reality of a movie set, I loved it. 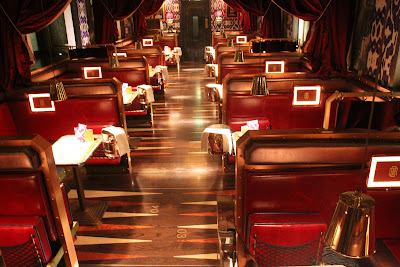 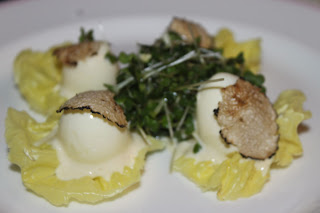 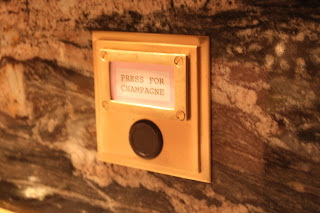 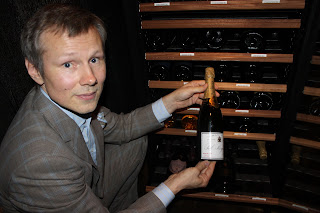 Leonid with their most expensive wine, 1.5k. The mark up on wines is very small at Bob Bob Ricard. 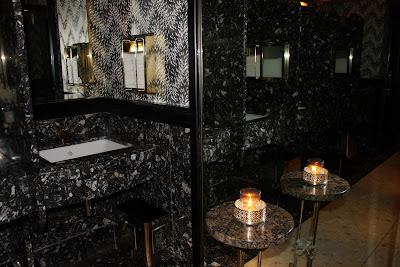 The gorgeous bathrooms with another hand-painted wall paper.
We tried a selection of dishes: quails eggs garnished with truffle; cucumber pickles; caviar and blinis; delicate little pelmeni dumplings. Leonid pressed ice cold vodka onto us, the best quality. I drank at least five glasses and had absolutely no hangover the next day.
Our next stop was a Russian shop ‘Cmak’ in Turnpike Lane. There, guided by Katrina, I bought Russian sunflower seeds (a popular snack), salmon caviar, pickled tomatoes, tins of sprat paté, a red Georgian sauce, sour cream and cottage cheese (quite different to ours, thicker, sourer) and cute retro Russian chocolates. 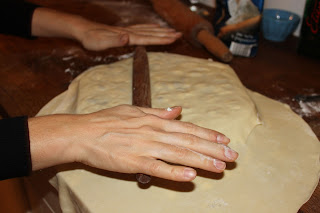 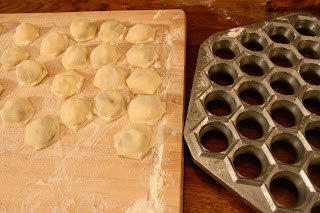 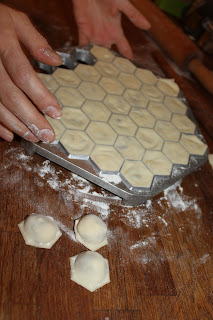 Third stop was Stanmore, the end of the Jubilee line. It’s not far away from Kilburn, but feels like another world, countrified surburbia with enormous houses in leafy lanes. I visited the wife of a Russian oligarch to borrow a memento from her homeland, a souvenir of her terroir, a hexagonal mould to make ‘pelmeni’ the Russian dumplings.
We have divided our menu into proletariat, post revolutionary and posh, pre-revolutionary food. Nowadays, having heard stories of Soviet food shortages and austerity, we do not associate Russian food with gastronomy, opulence and luxury. However there was a great collaboration in the 18th and 19th centuries between Russian and French chefs, resulting in many dishes ‘chicken kiev’ for instance. This was also the time when “service à la russe”, that is plates being served consecutively in the order they are written on the menu, became popular, in contrast to “service à la francaise” everything served at once.
I’m serving small plates of food called ‘Zakuski’:
Vodka shots served during the meal. I’m using Grey Goose (a French vodka), Russian Standard, and Sacred Spirits (a British vodka)
Black bread with smoked salmon and salmon caviar
Home made blinis with real caviar from Kings Fine Foods.
Borscht soup
Pickled tomatoes and gherkins (pickled vegetables very popular in Russian for seasons in which nothing can be grown)
Home made sauerkraut
Pickled mushrooms
Estonian sprat paté
Fabergé eggs
Stolichnyj salad
Stuffed cabbages
Sturgeon in sour cherry sauce 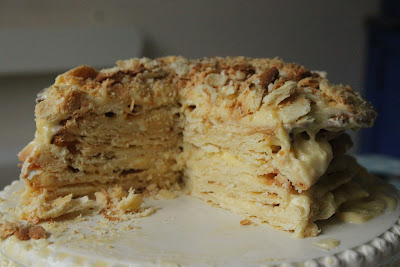 Dessert:
A dessert known as ‘Napoleon’, a mille feuille with condensed milk and kilos of butter. Napoleon cake comes from a bastardisation of Napolitain rather than the failed conqueror of Russia, Emperor Napoleon. This recipe is obscene: the cream consists of a one kilo can of condensed milk mixed with a pack of butter. It’s brilliantly addictive. You can’t stop thinking about it once you’ve tried.You’ll wake up in the middle of the night wondering if you should get up and have another slice.
An apple charlotte
Black tea served in saucers from a samovar. Russians like to drink from saucers and this is also a very English working class habit, my nan used to do it, to pour your tea into a saucer to cool it down, then drink, although I’ve not seen anyone do this for years.
Bubliki + soviet chocolate sweets

Previous Post: « Christmas present ideas for people who are always in the kitchen at parties
Next Post: Zakuski, Russian night in pictures »