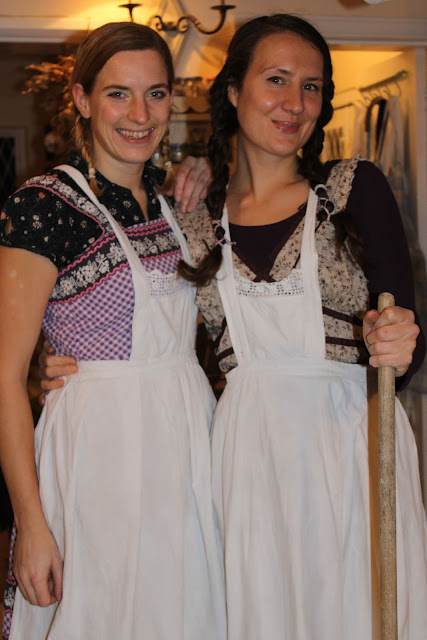 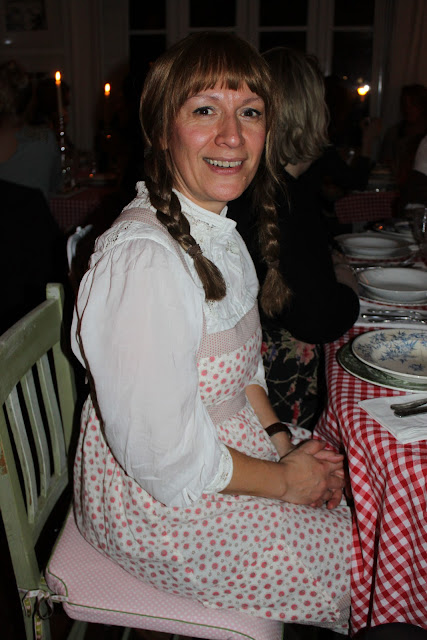 Grown women leap at the chance to wear a bit of Laura Ashley, a big apron and put their hair in plaits… 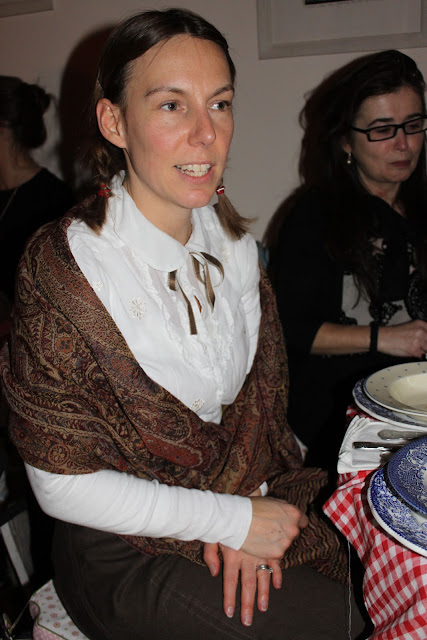 We all agreed that we acted and felt different in our olde worlde feminine clothes, very ‘surrendered wives’ 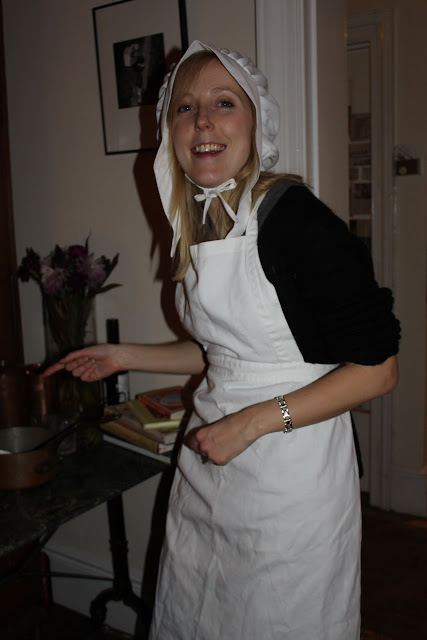 With a whole room full of women in aprons, it did become confusing. Another guest went up to this woman and said ‘Ooh you must be exhausted after all of that cooking’ thinking she was the chef.
Last night the Islington Women’s Institute (comprising mostly of the book club*) came over for their Christmas do. The theme was Little House on the Prairie/Little Women. I read a passage from ‘Little House’ whilst on the rocking chair in front of the fire. Grace was said. A quiz was held. Prizes were given for the best answer to ‘What character from Little Women would you most like to go to a party with and why?’
Two winners:
‘Amy March, because of her innovative non intrusive plastic surgery methods (nose peg!)’
‘Aunt March because she had an extensive library’
A group of the women stayed behind and helped me clear up after we all pulled up chairs and gossiped. One lady works in Fenwicks in the toy department. She talked of the many parents who park their pushchairs in the toy department and go shopping elsewhere: an 18 month baby was left while the parents went to Marks & Spencers! Another abandoned toddler painted himself entirely green and drew a green circle around himself. (One way of making sure you won’t get kidnapped.) Then the childminder returned from her shopping and complained to the staff.
‘ 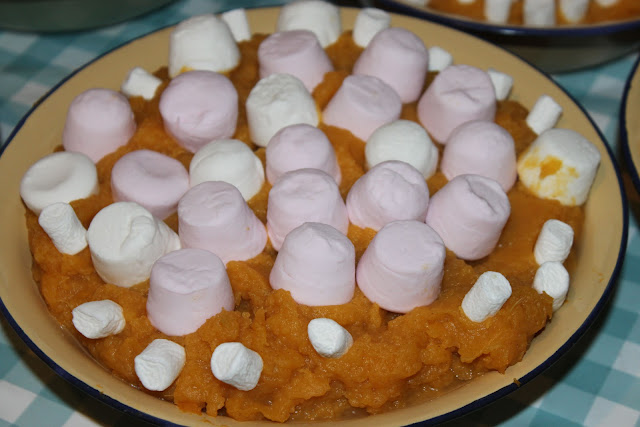 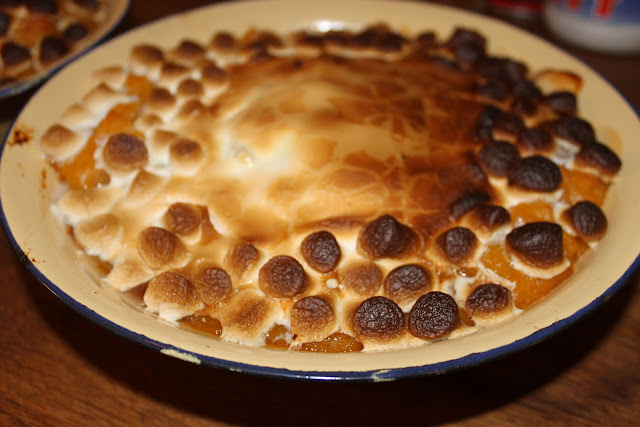 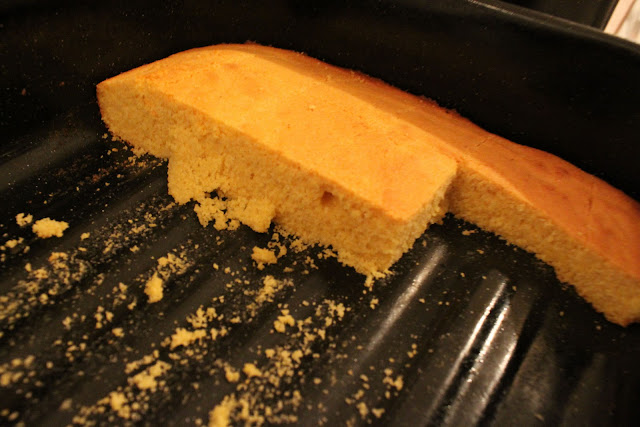 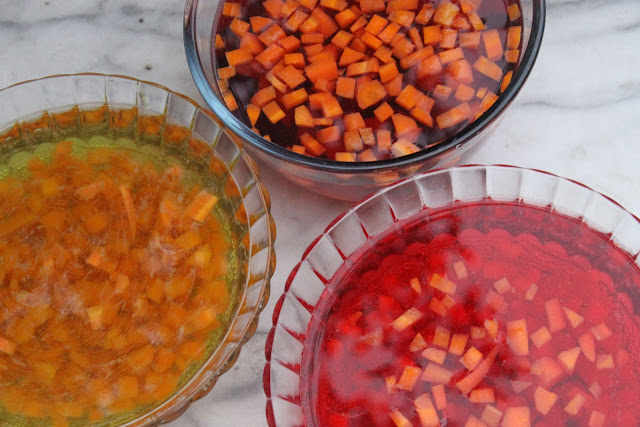 Salad in jello: lime, blackcurrant and raspberry as recommended by Shelley Von Strunckel, the American astrologer. 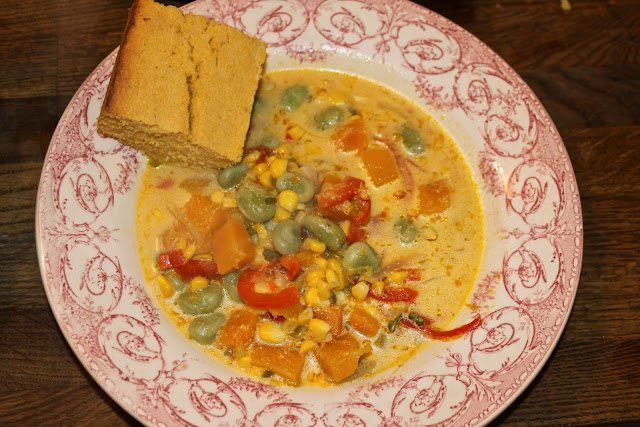 The vibrant succotash, a recipe from Stewed! cookbook (although I added more liquid to make it more soup like) with cornbread, which, as my Anson Mills heirloom corn order didn’t arrive, was made with finely ground polenta. It had a slight crunch but was very good. Especially with whipped butter and maple syrup. 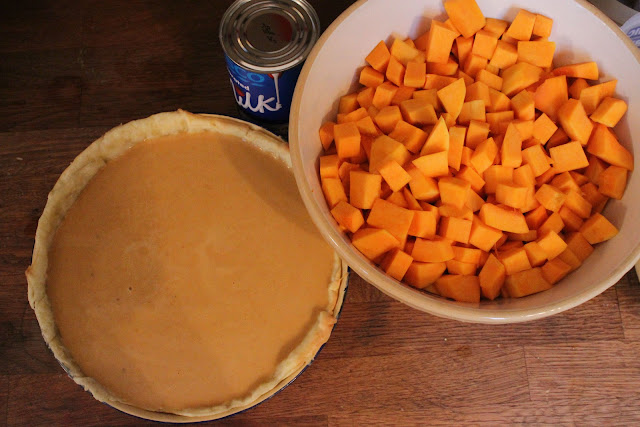 You can make pumpkin pie from scratch 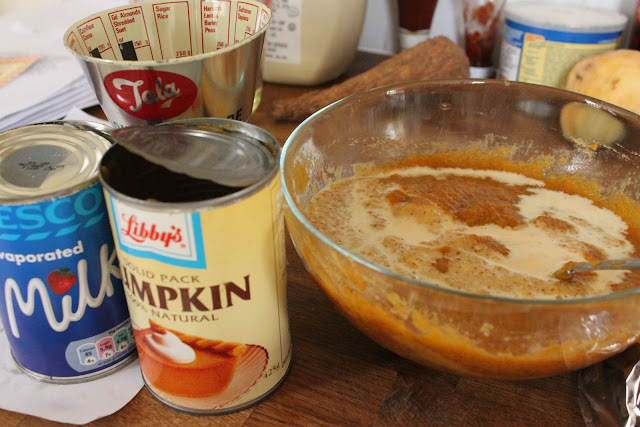 or with a tin of Libby’s pumpkin pie and evaporated milk…
The green bean casserole was possibly the most popular dish. I will post up more pictures later…
*one of whom was in a rival ‘low-brow’ book club where last month’s selection was Cosmopolitan magazine. She doesn’t want to be in a book club where they have to read books, she said.