Which salt is your cooking worth?

Judicious seasoning has always been essential in cooking, but there’s much more to salt than a fine white powder. Do you use different salts for different purposes? 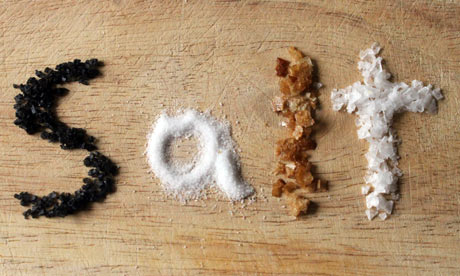 Four very different salts: left to right, Hawaiian Black Lava salt, common table salt, smoked salt and Maldon salt. Photograph: Kerstin Rodgers
Often these days guilt and anxiety wrestle with taste and pleasure in our minds as we hesitantly reach for the salt. The value of salt to humankind throughout history is well known – the word “salary” derives from salt – but recent governments, backed by medical professionals and given a platform by headline-hungry media, have taken to warning us off it with regularity. It is the case that many food manufacturers have added salt to excess in the production of, say, ready meals and sauces, but as with so many foods, we shouldn’t be scared of salt; it’s a case of using it responsibly.

It’s worth remembering that despite all the clamour and confusionsodium is an essential mineral (the recommended daily intake for an adult is 1.6g). Sea salt is also a good natural source of iodine, a deficiency in which can lead to goiters, once relatively common (especially among females) in parts of the Alps and certain regions of Britain, giving rise to the folk name Derbyshire Neck. And, as American food writer Jeffrey Steingarten puts it: “after dinner, our bodies eliminate the salt we don’t need. That is why God gave us kidneys”. He quotes the Harvard Medical School on the 1988 Intersalt study, which says: “It seems unlikely that salt intake is a major influence on the development of hypertension in most of the world’s populations”.
The white stuff, the “charlie” of condiments, is nonetheless addictive – I sometimes just eat it on its own. Smoked salt is going to be one of 2011’s food trends according to a recent report from Waitrose, who, we should also note, have commissioned Heston Blumenthal to create several gourmet salts, including rose and coriander, vanilla, and smoked.
Continue reading here…