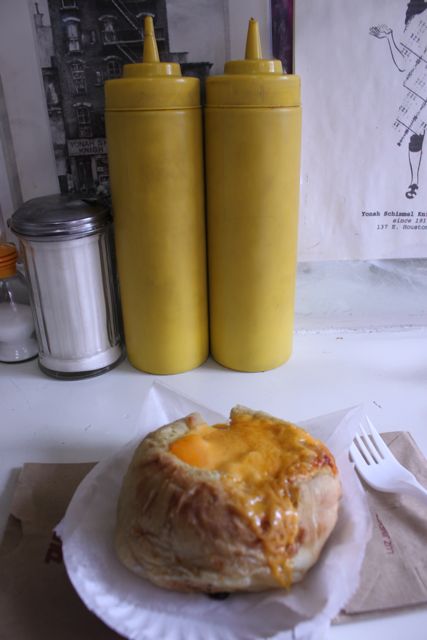 Potato knish with cheddar and mustard

For a while I lived in Los Angeles. I think I had some fanciful idea I’d end up as a movie director. I managed to stick it out for two years, before a series of frightening events; a dead body upstairs went undiscovered for a week, a freebasing building manager, a homicidal stalker entering my apartment in the middle of the night, having no car and going everywhere by bus, the throngs of cockroaches and scampering rats, got to me.  I slunk back to blighty with a trunk full of vintage thrift shop clothes and an aerobicised body. But there were some good times: my friend punk poet, Iris Berry and I used to visit Canters Deli after a night out. It was open every single day and all night. It never closed. I even, finding myself alone, went there on Christmas day. The middle aged waitresses were comfortingly maternal while at the same time, hard boiled. The list of celebrity visitors ranges from Judy Garland to Johnny Depp.
I always ordered the same thing:  “kasha and bows” and “knish with Muenster cheese”. Kasha is buckwheat while bows is farfalle, a butterfly or bow-tie shaped pasta. A basic knish is mashed potato enveloped by a thin shell of pastry. This food is Jewish, from Eastern Europe. It’s heavy stuff, designed to tether you down while a Siberian wind is blowing.
Two establishments in New York took me right back to those days: a visit to Katz’s Deli (catch phrase: “Send a salami to your boy in the army”) and Yonah Shimmel’s Knishes, a few blocks away. Katz’s was where Sally had her fake orgasm over a sandwich in ‘When Sally met Harry’. Yonah’s has been going for one hundred years and, like Katz’s, is a New York institution. Their knishes are freshly made downstairs and brought up on a dumb waiter. 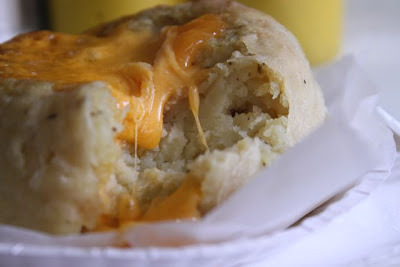 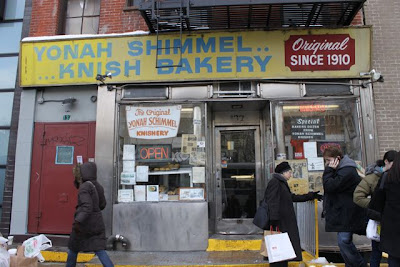 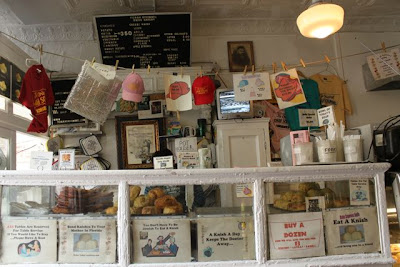 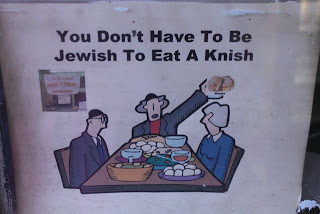 but it helps…
Katz’s Delicatessen, New York’s oldest deli, has a homely and sprawling dining room, the walls jumbled with photographs of celebrated visitors including presidents.  As you enter, two unnerving black bouncers, bottoms spreading cartoon style over their stools, crackle at you: “take a ticket, order your food, sit down, pay on the way out” so quickly I had to ask them to repeat it. Which they did with a surprising smile.
This is a place where tables talk to each other. It’s been in the same family for three generations, the current Mr Katz was gladhanding the clientele, talking to everybody, going up and down the tables.
I ordered a bagel with lox and cream cheese with a side of sour and semi sour pickled cucumbers and pickled tomatoes. Mr Katz explains to me that the cured meats they have on the wall, they are not allowed to sell. “People have been curing meat for hundreds of years, but the New York health department say this is risky. I have to keep them refridgerated. Those on the wall are just for decoration. The health laws in New York are stricter than anywhere else.”
We talk of how New York has changed: “Around here, 2nd avenue, the lower East side, before, there were drug dealers, it was dangerous. Guiliani cleared it up. There is very little crime now.” 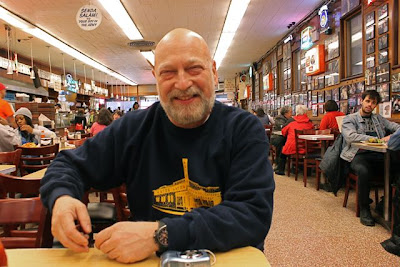 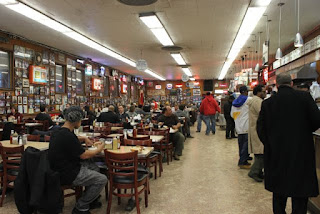 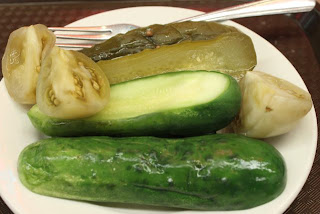 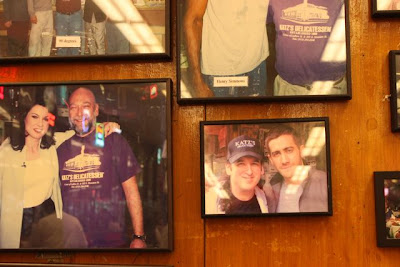 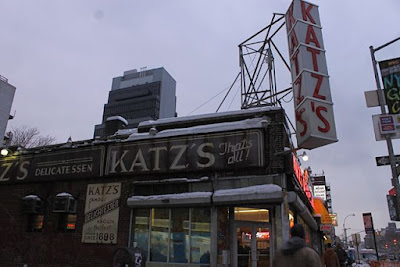 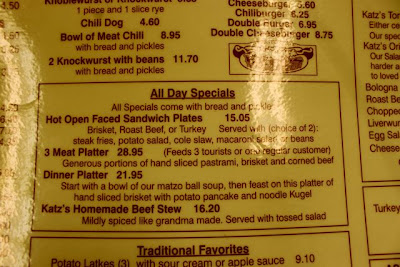