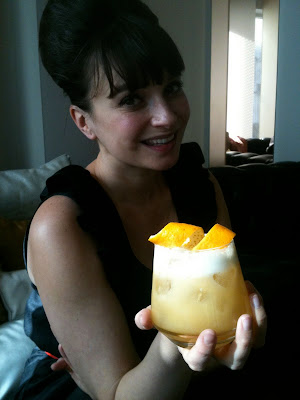 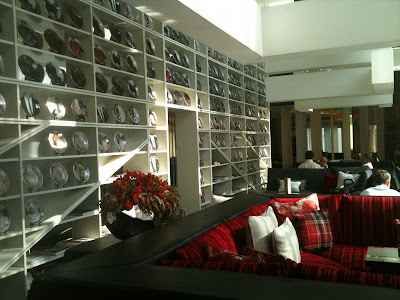 Bunking in to places must be in my genes. My dad, a journalist, was an expert at it. Arriving at the Olympics without a press pass, he spotted that the official armband was bright yellow. He promptly bought a pair of Marigold rubber gloves, cut them up and fashioned some kind of official looking lettering, which did the trick, he managed to slide past security.
So lovely readers, on Monday I went for tea with the stylish TV chef and author Gizzi Erskine. She suggested meeting at the W hotel in Leicester Square. Worth going to just for the lobby… reminded me of the Ace hotel in New York. Tea soon morphed into cocktails, Gizzi mentioned she was invited to the opening of the World’s 50 Best Restaurants awards at the Guildhall, and suddenly we’d hatched a plan in which I would bunk in. 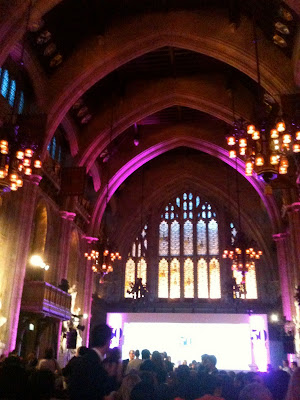 A taxi ride later, I’m nervously striding through the medieval sand coloured stone paved square of the Guildhall in the city. The architectural glory of the 12th century site, both outside and inside, is a treat to behold. Milling outside was everybody who is anybody in food, le tout Londres and le tout Denmark.
Sarah Canet, PR for the event, came up to me with a steely but polite gaze saying through gritted teeth: “This is your first time here isn’t it?”
“Yes it is”, I replied brightly. Damn, I thought, I hope she doesn’t grass me up.

So I air kissed Nuno Mendes of Viajante, Ravinder Bhogal, Richard Vines, Xanthe Clay, Richard Johnson, Bruce Palling and other luminaries of the food world. Few, if any, bloggers were invited: The Wine Chap was wearing a burgundy coloured suit and Douglas Blyde hissed about having to travel up to Hampshire to borrow a sick old ladies’ unused invitation. No, this was strictly olde worlde meeja.
As Gizzi and Jay Rayner strode towards the door, I tried to follow in their slipstream, muttering to Jay Rayner that I wasn’t invited. He stopped in his tracks and said “Sorry I can’t help you” while reversing rapidly. As one of the presenters, I guess my confession put him in a difficult position.

The door Nazi looked carefully down her list, ‘I’m afraid you are not here’. But then didn’t allow Gizzi in either, didn’t recognise her, didn’t recognise anyone. Gizzi whirled around and, with the aplomb of a seasoned night club jibber, said ‘Lets try the press entrance’ where bizarrely, I was let in and she wasn’t.
Head down, I wended my way to the great hall where they were serving drinks and canapés: the champagne was in magnums and the canapes were tucked into mini savoury icecream cones threaded into black perspex trays. The servers seemed to be buckling under the weight. Inside, Jay Rayner did a double take and said “I never thought I’d see you again. Well done, I’m impressed. Where is Gizzi?”
“Gizzi is stuck outside, can you help her?”, which made him laugh even more as he ran out to get her.
The Noma team wore Viking helmets with horns; typical Danes, they are enormous, while head chef René Redzepi is tiny. Heston is small too. (Yay for short chefs!) I got talking to Noma’s sommelier.

“So what kind of drink do you serve? … Beer? … Loganberry juice?”, I asked him.
“Wine. The food is locally foraged but the drink is international”, he replied.
“What about vodka?”
“We cannot serve vodka. The food at Noma is small and delicate. Vodka is 40º proof. A small glass of that with each course and our customers will all be very drunk”
I’m afraid, dear reader, after 3 glasses of champagne, I wouldn’t let it rest at that…
“Water? You could serve local water?”
“No.” he was starting to look irritated “the drink is wine, it goes with the food. But the wine comes from cold parts of Europe”. He moved away.

These awards tend to value a certain style of food: ‘Modernist Fayne Dining’. I was most interested that there were restaurants on the list from Mexico and Peru. But I imagine they are cooking Noma-style food, droplets and shavings, served asymmetrically on a plate, but this time with tequila and cactus, or guinea pig and Pisco.
I’m not sure what to think about the special prize for ‘Best woman chef’ won by Anne Sophie Pic, whose restaurant was number 74 on the list. It seems a little patronising. It remains a fact that top women chefs are still a rarity in a world where long hours and evening service preclude those who have primary responsibility for rearing children. Maybe positive discrimination is the way to go… women-only lists are the reason we now have more female MPs in parliament. It doesn’t look like things will change anytime soon as Bruce Palling’s ten upcoming chefs’ list for the Wall Street Journal features only men. 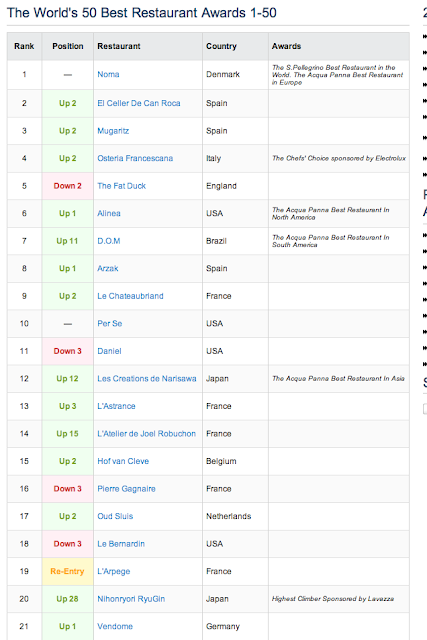 Ultimately it’s really rather absurd to have a top 50 list for restaurants, how can you compare food in that way? It makes such a difference to the chosen restaurants: I met Claude Bosi, whose restaurant, Hibiscus in London, last year achieved 49th place. Bookings rose, he told me. This year Hibiscus moved up the rankings to 43. Last year, when Noma won the number one spot for the first time, they received 100,000 requests for bookings overnight.