What an interesting bunch of people came along on Saturday for the Underground Universities ‘How to start a successful supper club’ conference. 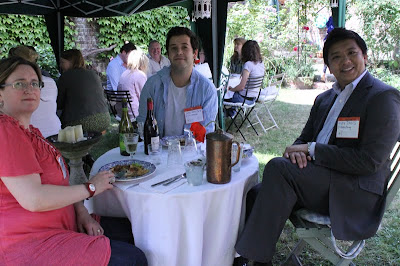 Linda, James and Andre. Lynn is sitting at another table. I didn’t take many pictures, too much to do. 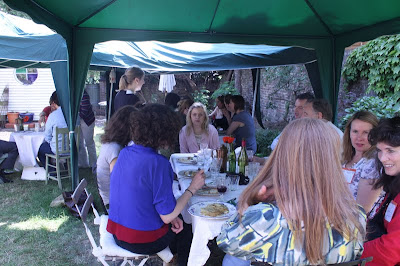 I feel sure that 16 new supper clubs will start as a result…ranging from game cookery supper club in Milton Keynes, to pescatarian menus in East London, cooking workshops and after school tea for mums and kids that want to learn to cook. People came from Ireland (a mum and daughter, both keen cooks, the daughter is gluten-free, I said plenty of gluten free types over there needing great food) and Scotland and all over the UK. One lady wanted to start a Croydon supper club for divorcees. I did warn her, there are simply no single men in London. I suggested she start a ‘first wives club’ in which guests could plot revenge and bitch.
We had a West Londoner with roots in the West Indies: who wouldn’t want proper home style Caribbean cooking?
Another lady who runs a small creative business in architecture wanted to start up a food and creative networking club.
We started the day with a talk by Lynn Hill who explained how she started her secret tea room near Leeds. From the kitchen I heard applause so I guess it went well.
Next up was Linda Williams of Bright Blue Skies who gave the lowdown on tax and the law for small food businesses. One guest said to her “you’ve achieved the impossible: you’ve made tax sound interesting”.
Meanwhile guest supped on coffee, tea, fresh juices (blood orange and watermelon) and home made pain chocolats and croissants. I was up till 2.30 am rolling them out in a sweaty kitchen with my new vintage ceramic rolling pin.
Lunch was Mexican style and out in the garden. Some of it was cooked on the open fire. Most of the recipes are contained in my book.

Fish tacos with red pepper marinated mahi mahi (er it’s a sort of dolphin)
Tomatillo and chille en adobe salsa
Salsa asado
Guacamole
A wet garlic, fennel and kohlrabbi salad
Shredded pointy cabbage and lettuce
Brokeback beans but with added lime juice.
And corn tortillas.
Now there’s a bit of a story behind the tortillas. They weren’t quite as successful as I hoped. I imported hominy from Anson Mills in America at great expense (the actual stuff wasn’t expensive but the shipping was and…then the £30 I had to pay to release the hominy from custody, I mean customs). To make fresh masa from hominy is supposed to be one of the best flavours you can find. I limed the hominy, soaked it overnight, pretty much cooking the corn for 24 hours. I even learnt the proper word for that cellophane stuff around popcorn kernels that gets stuck in your teeth: pericarp! But despite all my efforts, frequent pleading for more info on Twitter, begging emails to Glenn at Anson Mills, it tasted bloody awful. Chemical. Possibly…even dangerous to eat. I will have to try again.
Fortunately I had some masa flour from the coolchilecompany. I’ll just mix that together and press out the tortillas, I thought. I interleaved them with greaseproof paper. Mistake! When I took them out to the fire, the dough was stuck to the paper, the tortillas were falling apart.
A lovely guest called Barbara, who has experience in catering, came to the rescue with a brilliant tip: get out some ice cubes and the dough peels away from the paper. It worked! Hooray! By this time the fire had burnt down somewhat so they weren’t as good as I hoped. Normally it works fine. Maybe it was the humid weather?
Then we had a large cheeseboard and baked ricotta with gooseberry and elderflower compote, a recipe from the new Riverford Organics cookbook by Jane Baxter ‘Every Day and Sunday’.
In the afternoon James Ramsden of The Secret Larder supper club and Andre Dang gave talks. James mentioned his biggest supper club cock up: Ravinder Bhogal let him do a rose water pannacotta recipe to make for dessert. It wouldn’t set so they just changed the name to ‘rose water milk’.
Andre Dang came up with punning names for each supper club. The man is wasted in food PR, he should be a Sun headline writer! I’ve never seen someone think so quickly on their feet about an angle on a story.
We finished with prosecco and peppermint creams.

Previous Post: « How to run a successful supper club conference tomorrow
Next Post: The Craft day on June 4th »