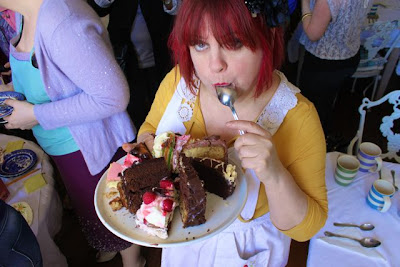 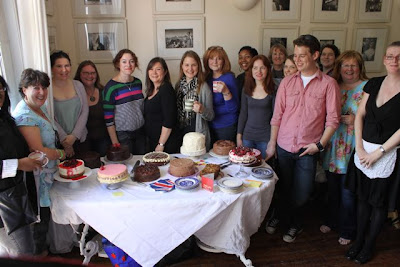 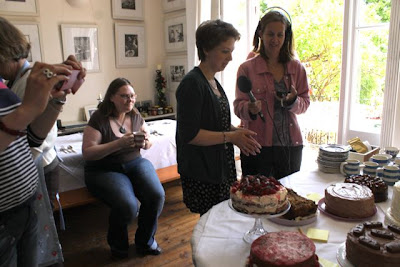 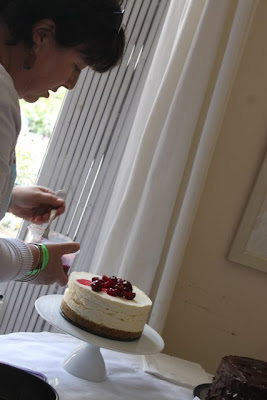 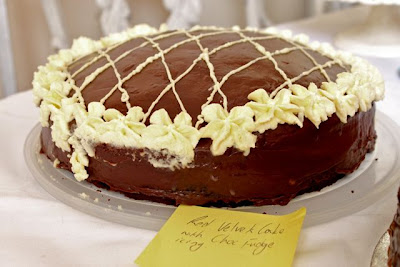 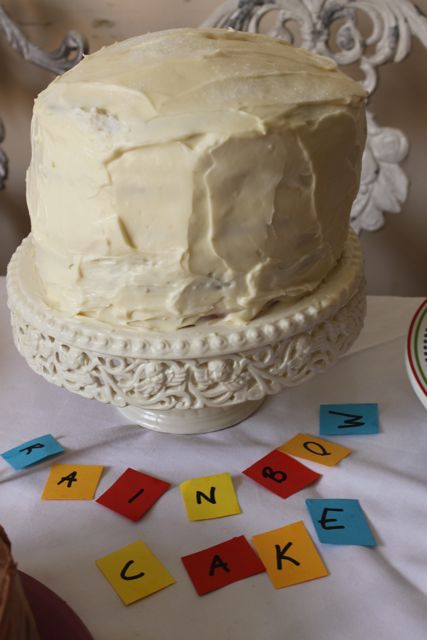 My Rainbow Cake, looks quite normal on the outside. 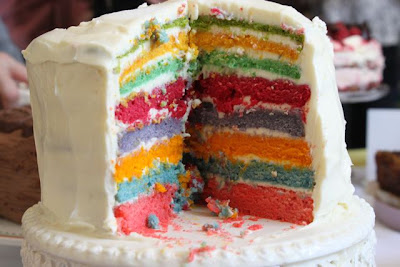 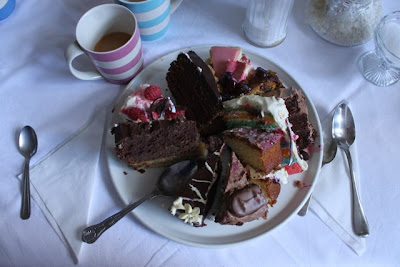 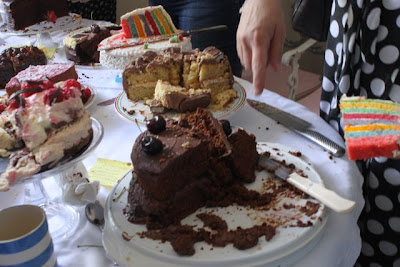 I’ll have some of that, and that and that! 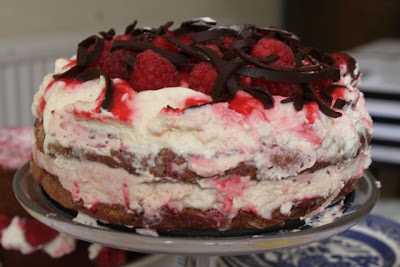 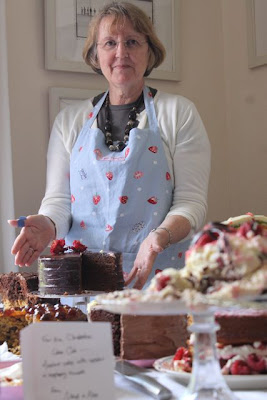 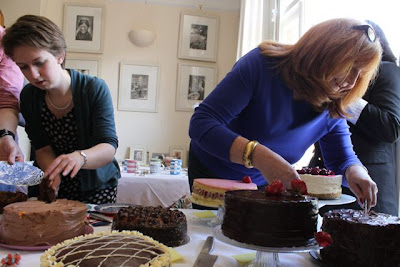 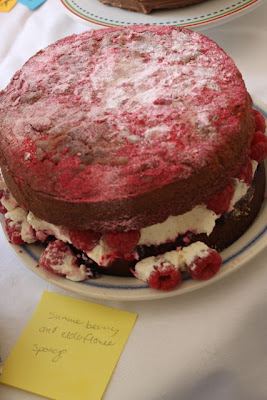 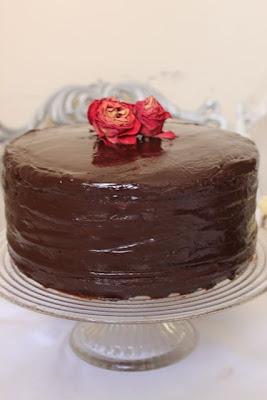 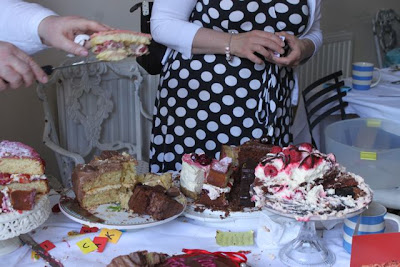 Polka dots, sunshine, tea and cake: what more could you want from a British summer? 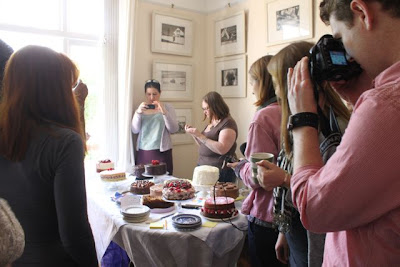 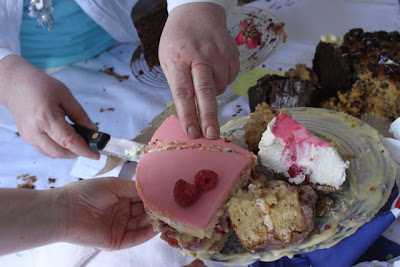 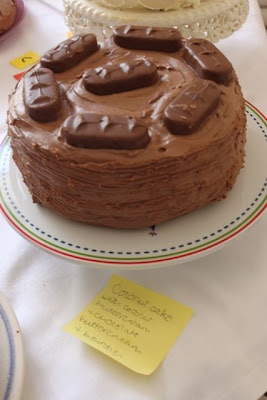 I hate Bounty bars but this was one of my favourite cakes: “Sooo buttery” I managed to splutter between mouthfuls to the baker. “It’s made with Flora margarine” she whispered. 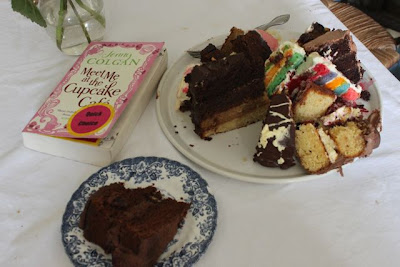 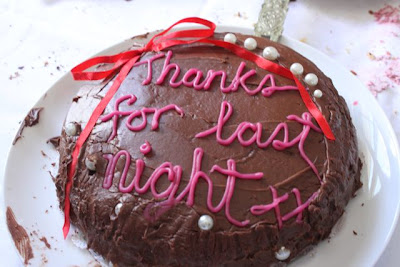 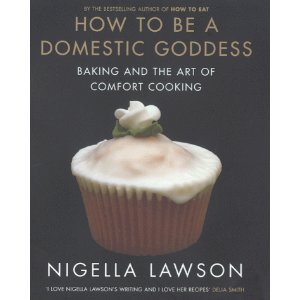 In terms of trends for women, Nigella Lawson brilliantly tapped into the post-modern-feminist desire to spend time, baking, in the kitchen, with the year 2000 publication of ‘How to be a domestic goddess’. The iconic cover, adorned by a small and singular cake, glossed with lo-rise white icing and topped with a sugar-craft rose, spoke to all of us, me included, who learnt to bake at nursery school and yearned to reproduce that comforting shared moment with our children. Baking, like knitting, is a touchstone of ‘good’ motherhood. Even though I can’t knit, I felt that I couldn’t be a good mother unless I tackled needles and wool while pregnant. (I eventually managed a holey plain knit ‘waistcoat’ three sizes too big for my baby girl).
My baking talents were long dormant but resuscitated for the decade ahead of the obligatory annual birthday cake for my daughter. For every mother, even if you spend 12 hours a day at work, we all want to be Ma Walton at heart, and the odd Sunday, donning an apron and baking a cake, soothes and calms that nagging feeling of not being ‘good enough‘. Designer Cath Kidston has also understood this nostalgic urge with her range of retro goods.
I wasn’t a very good cake maker; to the point that my daughter was pleading with me, yearly, her birthday looming, when I’d roll up my sleeves and have another go, to buy a shop-bought cake. The purchase of an Aga in 2008 changed all that. It wasn’t me, it was my oven! It’s difficult to produce a good cake in an electric fan assisted oven.
Since then, my baking skills have gone from strength to strength: I hosted the first Underground tea in April 2009, since then several secret tea rooms have sprung up around the country. There are many reasons for this popularity: the enduring and simple appeal of cake, the baking boom, and a tea is often seen as a safer option for a supper club for a lone female hostess.
My colleague, Lynn Hill, who runs The Secret Tea Room in Leeds, has started a satellite project, The Clandestine Cake Club. For a mere fiver, people can bring along a home-baked cake and a non baking guest, to a cake club at different locations. Clandestine cake clubs have been held in Leeds, Manchester and Edinburgh. Edinburgh has declared for itself the special quality of ‘the city where cake has no calories’, a kind of Brigadoon for fatties. This time, the CCC (first rule about cake club: don’t talk about Cake Club) came to the calorie laden part of North West London known as The Underground Restaurant.
There are rules: NO cupcakes. The traditional large cake is favoured. Tea and coffee is supplied. At the end, any cake left over can be taken away.The record amount eaten so far is 11 slices by a man called Rob.
Last Saturday Woman’s Hour came to record the event and 18 women and 1 man turned up to my house. Some cakes, delicate confections, were a little battered by the journey. One brave woman even cycled over. Another had an enormous bucket, or perhaps it was a plastic cat basket, big enough anyway to carry a small animal, to take cake home. People came from as far as Surrey and Essex. A handful had their own secret tea rooms (to be found at Find a supper club, become a fan).
“There is no competition”declared Lynn sternly “all cakes are welcome”. But of course there was; we were all beadily eyeing each other’s creations.
I’d laid out places at tables and chairs but nobody could leave the magnetic draw of the big cake table. Most of the afternoon was spent stood around it.
Inspired by Lynn, I’m going to organise a cake wreck club, planned for September 18th. Keep an eye here for details! Prepare your worst and most vulgar cakes! 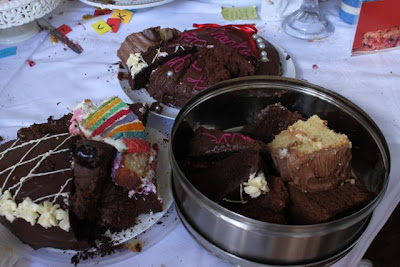 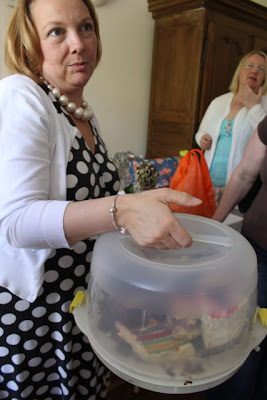 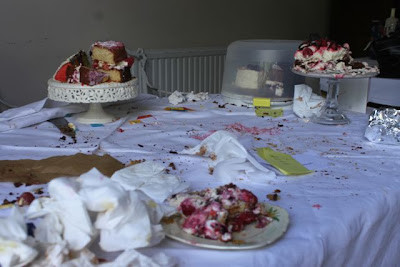 The aftermath!
In my next post: I will give the recipe for my rainbow cake.