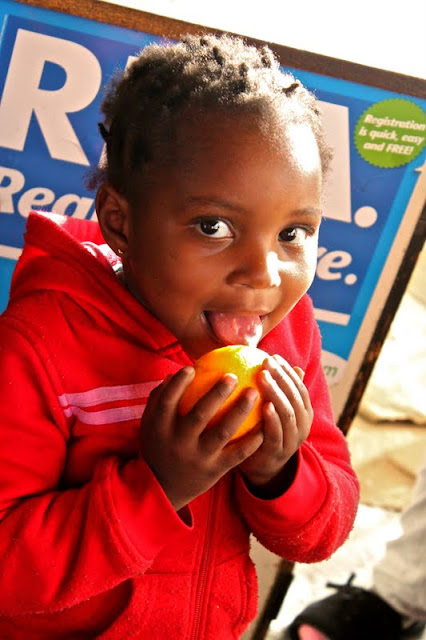 In 1999 I visited South Africa, five years after the end of apartheid. The country seemed fitful, hanging by a thread: blacks stood quietly in the corner at places I visited while whites were either heading barbed wire companies, living in gated communities or, the other extreme, running around in rags on the street. I also spent time in Zimbabwe, which seemed like a vision for the future: a thriving artistic community in Bulawayo, and apparently friendly relations between black and white.
Twelve years later the situations have reversed: Zimbabwe is a basket case and South Africa, a hopeful experiment for the future of the continent.

I was invited to visit by South African citrus farmers: enormous Hagrid-sized desert khaki-clad men in shorts and boots. They are worried about grapefruit. The UK is one of their largest markets but it seems to be the forgotten fruit. 88% of Britons have never bought grapefruit. In marketing terms this is called ‘penetration’. The highest ‘penetration’ is for apples and bananas, most people buy them. A twelve per cent penetration is low.

Japan, on the other hand, adores grapefruits; averaging out at two each every day.

“What are the Japanese doing with grapefruit?” I asked, my curiosity piqued.

“The customers are older. They eat them for breakfast. Grapefruit is considered an old fashioned fruit”, I was told on my second day at a conference attended by farmers in Nelspruit.

Here is the story of grapefruit in pictures, starting with a tasting session of 10 grapefruit varieties. I must say, I’m a convert. It’s a clean tasting fruit, less bitter than it used to be. I imagine it in cocktails, salads and salsas, not just a half for breakfast. 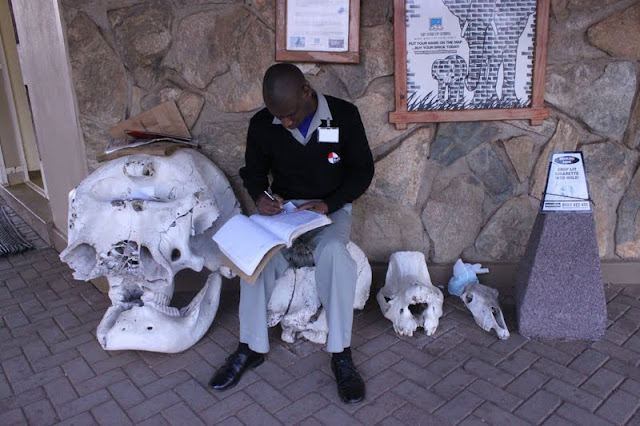 After visiting the grapefruit farmers of South Africa, I spent a night in Kruger Park, a section of fenced off land near the Mozambique border where wild animals can live naturally.
I rode an African elephant for the first time. Terrifying. African elephants are wilder than Asian elephants. Their ragged ears are huge and in the shape of the African continent. The more holes their ears contain, the older the elephant. Elephants can live up to 60 years old; their life span is dependant on their teeth. They grow a new set every ten years; when the last set of molars has grown and worn out, they can no longer chew their food, end up chewing on their jaw bone and die through malnutrition. Being an elephant is hard work: their size means they must spend most of the day eating and only six hours sleeping. They also have very poor digestive systems.
Before the ride we had a demonstration of how acutely the elephant can smell. Each of us took off a shoe and placed it in front of another person. The elephant picked up the shoe with it’s trunk and handed it to the correct owner. This took a matter of seconds. (When travelling around the safari park, the human smell is disguised by the smell of the petrol from the car).
The groom told us that sometimes he went shopping to the supermarket on the elephant. But they cannot ‘park’ very near to the supermarket as elephants love citrus. When going on safari, do not have citrus in your car, elephants may attack!
To ride an elephant we had to clamber up a staircase and straddle the saddle, it was rather wide. The groom rode in front. The elephant moved quite swiftly through the thorned spiky trees of the African bush. It seemed unaware that we humans did not possess a three and half inch carapace with which to protect ourselves from scratches. Suddenly after ten minutes of the ‘ride’, the body of the elephant shook like an earthquake.

“What’s going on?” I asked nervously.The groom replied “She wants to join the wild elephants out in the bush. She’s communicating with them by sending out tremors through the ground”.

The elephant kept rearing up, turning her head towards the bush and dipping her shoulders. I really didn’t want to fall. I’ve fallen off a camel before but in the dessert, onto soft sand. The keeper on the ground seemed panicky. The groom shouted repeatedly at the elephant. My companion behind had gone strangely quiet.

“Do tourists ever die?” I squeaked.

The groom’s answer was evasive.
Finally with the bribe of nuts the elephant consented to turn away from the wild. Back at base camp, I dismounted with relief. 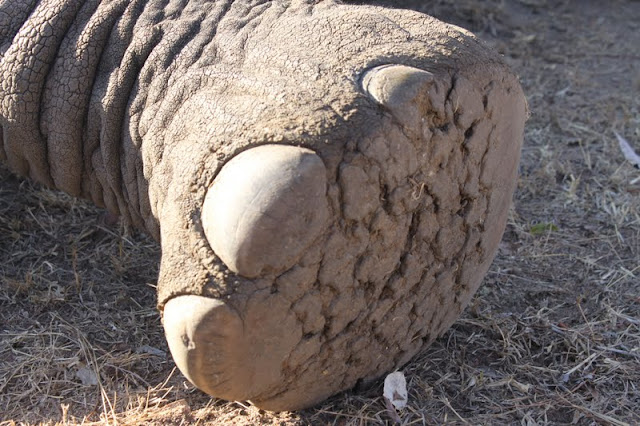 An elephant’s weight is all on the front feet 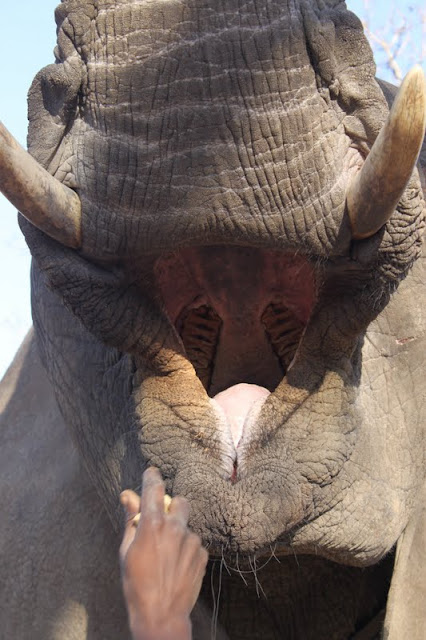 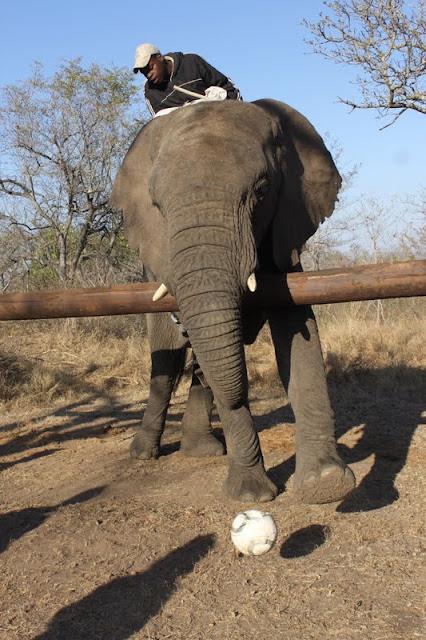 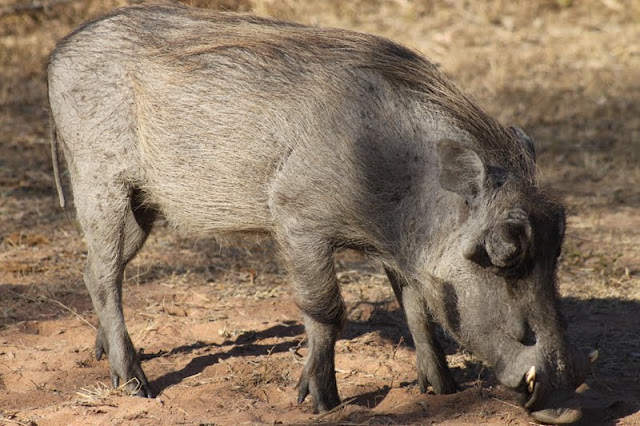 A warthog. I can’t look at this without thinking of ‘Lion King’. 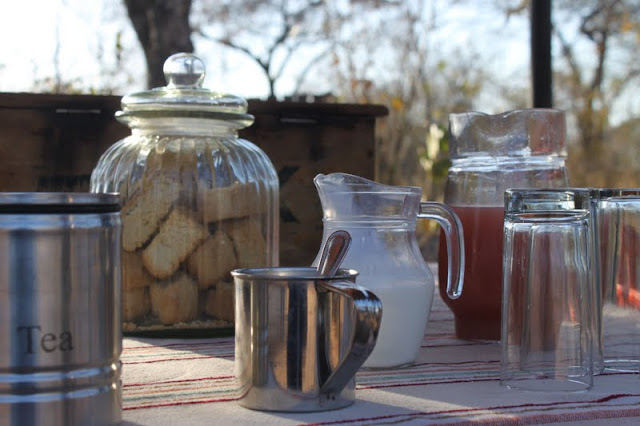 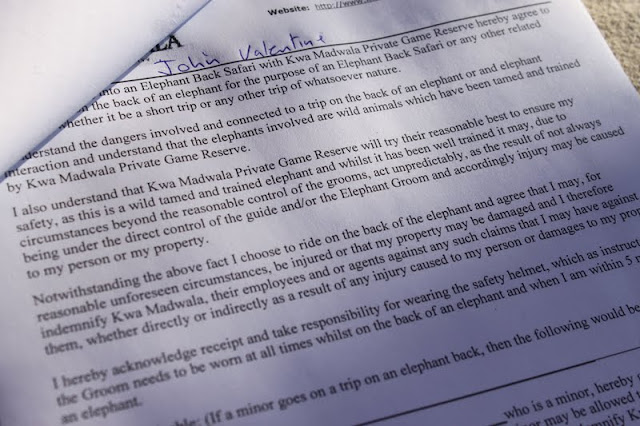 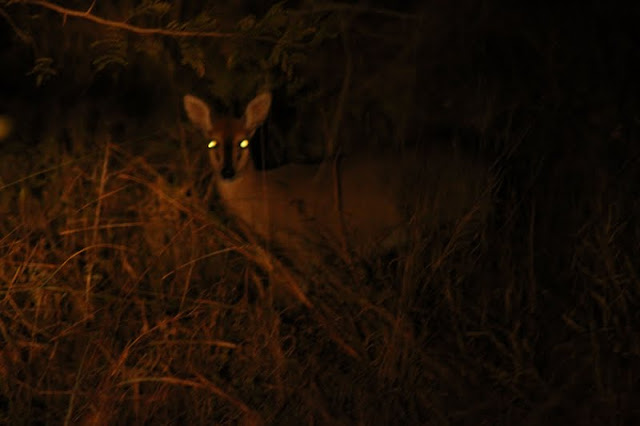 A duiker seen at night 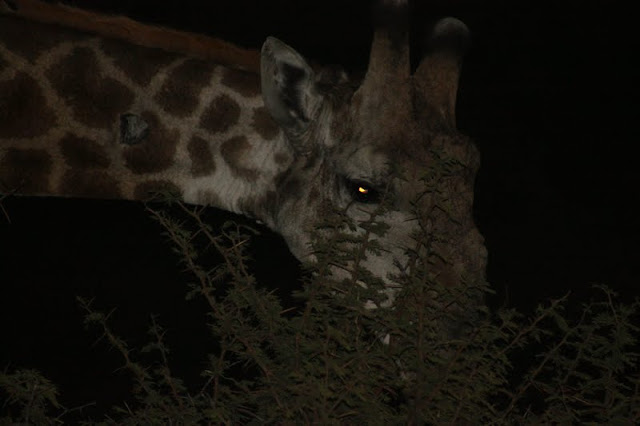 Imagine having giraffes in your back garden… 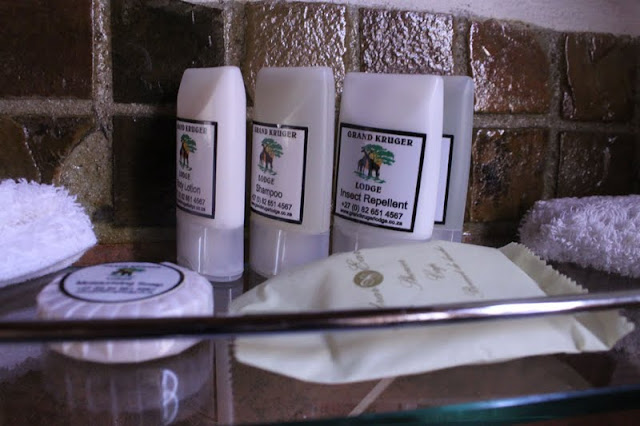 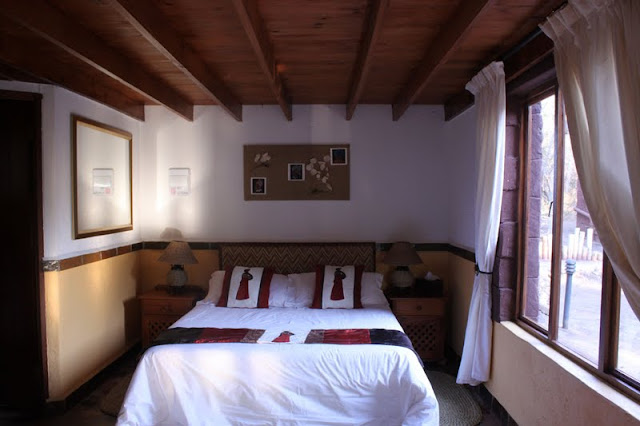 My room at Kruger Park The terrace outside my room 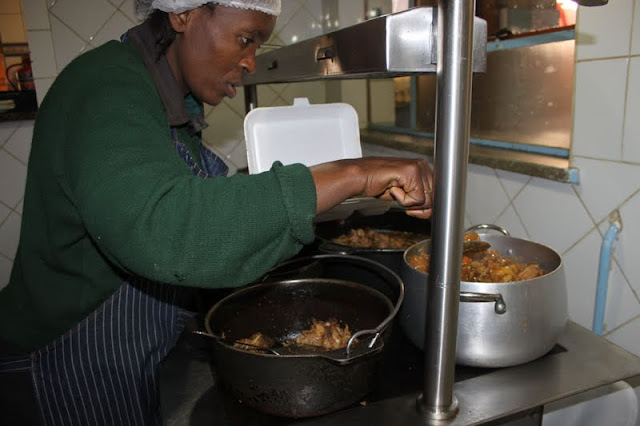 The pots of food
On my last day in South Africa, I revisited Soweto, the township on the outskirts of Johannesburg where  the Mandela family lived. Winnie still lives there. She has a restaurant opposite the Nelson Mandela museum. Apparently the food is very bad.

I visited a Soweto landmark…Wandies, a shebeen or underground restaurant, South African style. I was hoping to talk to Wandie himself but he was away. The young restaurant manager gave me the tour showing the heavy cast iron dutch ovens which contained typical African food like ‘pap’ (a kind of maize like polenta), ‘sauce’ (tomatoes and onions), greens, meat stews (oxtail and ox tongue is very popular), and a curry (South African food is influenced by Malaysian, Chinese and Indian cuisine). African native food is quite plain, spices being imported from Asia. Wandies started as a four room house, but has now spread out to fit 175 covers. During last year’s world cup, they worked all hours. Once the only restaurant in Soweto, now Wandies has competition, several others have sprung up.
Further up the road I chanced upon a more basic shebeen, still a four room house, selling quarts of beer and fried food such as fish and chips. It’s named after it’s owner ‘Magic’ who sat in the living room playing guitar. He has an alcohol license which you don’t need to pay for in South Africa and is open 10 am to 10pm weekdays and 10 am till 2am at weekends. Magic says a true shebeen is where you discuss politics. White people never go to his shebeen but I was made very welcome. I explained what I did in London with The Underground Restaurant…“oh so you are a shebeen queen!” Magic exclaimed and opened a beer for me on his crate. 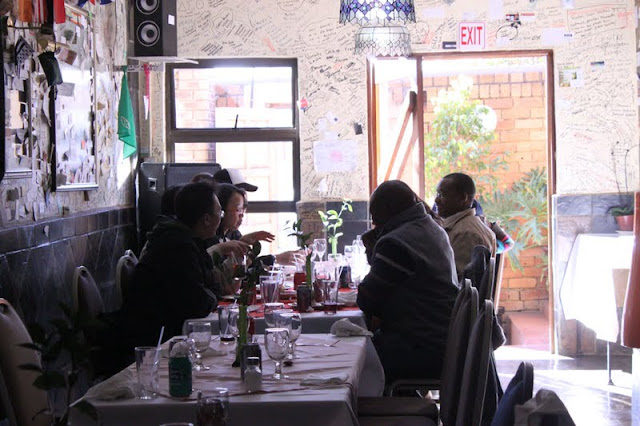 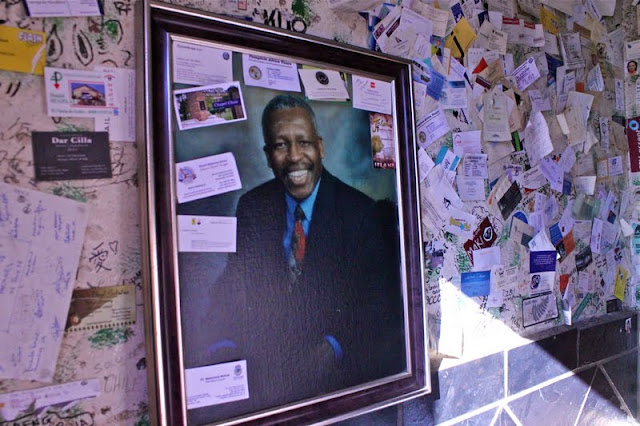 Wandie himself, a friend of Richard Branson’s 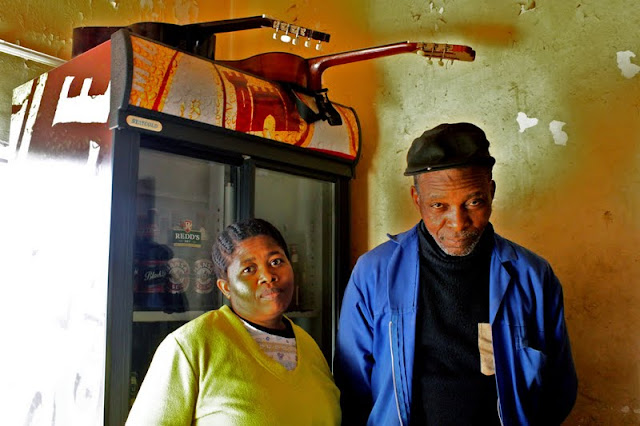 Magic and his shebeen queen 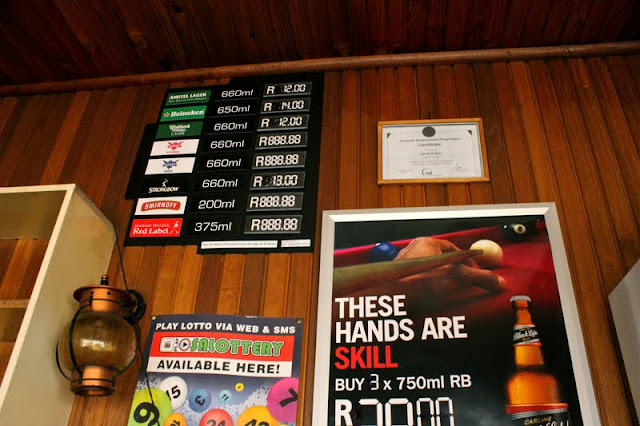 Bar prices and an alcohol license 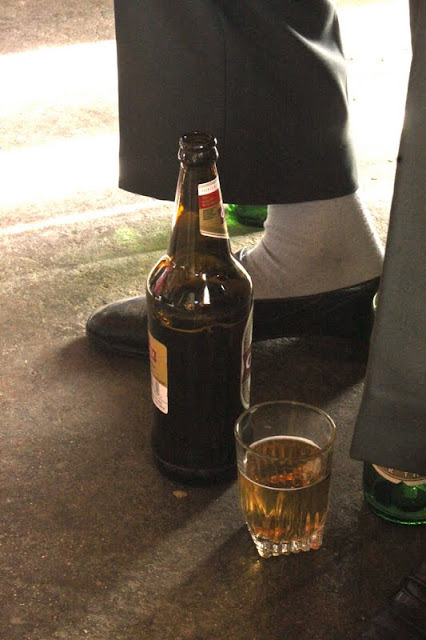 A quart of beer 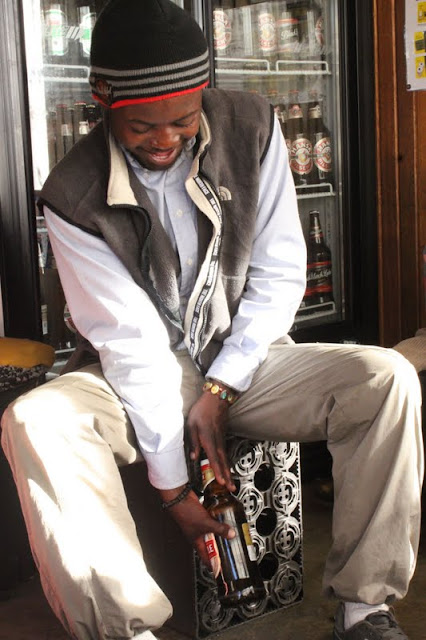 At Magic’s shebeen, a young man opens a beer on the crate where he sits…