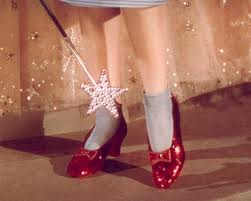 Where did Judy eat? Hollywood restaurants in the golden age of cinema (regarded as from the ’20s to the ’60s) included the Brown Derby restaurant, a restaurant shaped like a hat that became a Los Angeles landmark. 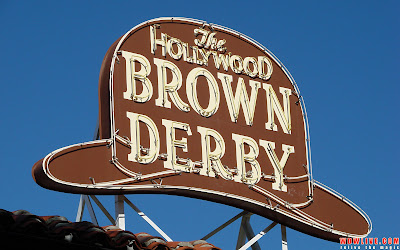 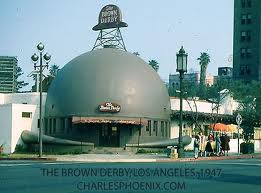 The owner Richard Cobb had the ‘Cobb salad’ named after him, reputedly when, late at night, his chef made him a dish made of leftovers from the fridge.

Another famous Hollywood restaurant of the era is the Musso and Frank Grill whose signature dish was French onion soup. When I used to live in Hollywood, I’d often choose the generous and remarkably cheap Daily Special from the menu while sitting at the dark bar or sitting at a red vinyl booth. Bukowski, Chaplin, Steve Mcqueen and Sinatra were regulars.
The stars also hung out at Chasen’s, now closed, but celebrated for it’s chili (which Elizabeth Taylor once insisted should be flown over to Europe while she was shooting)
Finally Romanoff’s, run by a fake Russian prince, Michael Romanoff, was prized for it’s chocolate soufflé.
The all-night deli, Canter’s opened up in the 40s, it’s still going and well worth a visit. Schwab’s pharmacy, or drugstore, where Lana Turner was discovered, is closed. 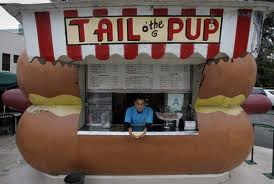 Hot dogs could be purchased at Tail-o-thePup, built in 1946.
These were the restaurants that Judy Garland went to in her heyday, although her favourite dish to cook at home was steak and kidney pie or chicken according to fan magazines.
Liza’s career was at it’s cinematic height in the 1970s. Amazingly she recently had a yard sale. How I would have loved to have been there.
Where did Liza eat? I know she partied at Studio 54 in New York but she probably used her nose more than her mouth. I love the detail that one event, a 4 inch depth of glitter filled the club’s floor, it was lodged in people’s clothing for months. Other reports suggest that Liza loves Italian food which wouldn’t be surprising as her dad, director Vincente Minelli was originally from Italy. Recently she showed a liking for Taco Bell, the chain Mexican restaurant which has now, hooray, opened in the UK.
Sophisticated seventies food included avocado with prawn cocktail, cocktails like Pina Colada, spaghetti bolognese, salads with blue cheese dressing, croutons and bacon bits. I think I’m more inspired by the food from her film Cabaret…home-made pretzels could be on the menu…
To book for the Liza/Judy night next Saturday here at The Underground Restaurant go to this link: http://www.wegottickets.com/event/132418
It’s my first home restaurant dinner since June! Hope to see you all for a fun night singing along to the soundtrack of Cabaret, and Judy at Carnegie Hall and I will dig out all my other Judy/Liza vinyl.

Previous Post: « Bestival: how to set up a restaurant in a field
Next Post: Video: Marigold petal rolls »