MsMarmite here: I woke with a streaming cold with the urge for an Asian style hot spicy soup. The herbs I used here, coriander and mint were part of the herb growing class that Zia Mays gave. Lemongrass on the other hand, is apparently easier to grow than one might think.
The meal was fusion in style, I was flying around my kitchen trying different things.
We started with a hot gin, lavender honey and lemon juice toddy, perfect for the frosty January weather. While the others went outside for their tutorial from Florence Nightingale museum’s Natasha MacEnroe and Zia Mays, I rolled and baked the lavash, a typical Persian flat bread. In the Middle East they have an appreciation of herbs to the point that they just serve a plate of unadorned different herbs including coriander, dill, parsley and coriander which you simply wrap inside the bread.
Another herb ‘by product’ is fennel pollen, a fashionable ingredient amongst chefs presently. Instead of the classic blood orange and fennel salad, this time I dosed the thinly sliced orange discs with pomegranate syrup and fennel pollen. Very effective.
I had half a kilo of fresh ricotta in the fridge and mixed this with eggs and a little cream with torn up sage leaves, spooned into a muffin mould and baked for 15 to 20 minutes. They didn’t last long at the table.
We finished with bay leaf and nutmeg icecream in a cornet.
Guests were lovely, the January light dimmed as we chatted over food and the fire was lit.
I’ll leave Zia to describe the gardening ‘arm’ of our operation in the next post. 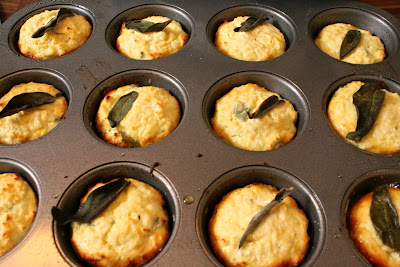