Sunday’s Secret Garden Club afternoon explored the world of herbs and medicinal plants. We looked at how herbs have been used both for culinary and remedial purposes, what herbs can be successfully grown, both indoors and outdoors, how to raise them, harvest them and store them. We also gave a brief historical overview of the use of herbs through the centuries and we were particularly lucky to have Natasha McEnroe, the director of the Florence Nightingale Museum, on hand to give a short talk on the contents of Miss Nightingale’s Medicine Chest, which contained the remedies, mainly herbal which she took to the Crimea with her and which now resides in the Florence Nightingale Museum itself.

The workshop was not intended to attempt any sort of diagnosis or prescription for herbal remedies – none of us are qualified to do this. It is always important to seek the advice of a trained professional before taking any kind of medicine and herbal remedies must be used in the correct way and the correct dose. An overdose (or ingestion where a remedy is meant to be used topically, for example) could be dangerous and/or toxic.
Herbs have been used both for culinary purposes and for the treatment of ailments for centuries. Writers describing the Hanging Gardens Of Babylon, which were supposed to have been constructed around 600BC, included thyme, coriander, saffron crocuses, anise, poppy, rosemary, and hemp among the plants they listed. 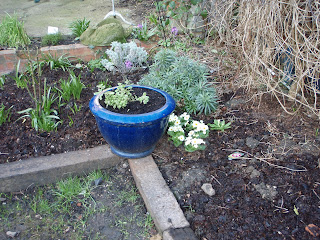 People have been reserving patches of ground to cultivate herbs for hundreds of years. In this country, the physic or infirmary garden was an important part of the grounds in a monastery. Monks not only cultivated fruit, vegetables and herbs for their own use, but often for the wider community as well. The monastery infirmary treated the sick from the villages nearby and remedies made from the physic garden were the main means of treatment.
Herbs grown for culinary and medicinal use in the mediaeval monasteries included cumin, fennel, comfrey, feverfew, yarrow, pimpernel, rosemary, sage, rue, lavender, rose, iris, mint, lovage and pennyroyal. You’d also find mint and wormwood in the kitchen garden
Recreations of monastic herb gardens can be found at
As long ago as 1652, Nicolas Culpeper, a herbalist who worked in London – and a radical who was way ahead of his time in many respects – wrote two books, The English Physician and The Complete Herbal, which documented the herbal medicine used at the time and was hugely influential.
Culpeper was a radical in many ways – he was accused of witchcraft during the English Civil War – one thing which shows the state of medicine at the time is that he was considered highly eccentric because he insisted on examining his patients instead of just examining their urine.
The herbs
I’ve documented the individual herbs in the Secret Garden in the Plant List page. At the moment, the garden contains:
and also Aloe vera, which isn’t, of course, a herb, but certainly counts as a medicinal plant.
Coriander, grown as microleaves
Coriander has a tendency to bolt, ie, set seed before it’s produced much in the way of leaf. My solution to this problem was to grow it to harvest as microleaves.
You’ll have seen microleaves on your restaurant plate or in the supermarket.  Coriander is a good herb  to try this way, because you get all the flavour of the coriander even though you are harvesting it when the leaves are still very small.  Long before you get to the bolting stage, anyway.
The plants will be grown for just 4-6 weeks so you don’t want to waste a load of compost on a deep pot. I find using an ordinary seed tray works perfectly well. Make sure it has the drainage holes at the bottom.
Fill with compost, water it well and let it drain. 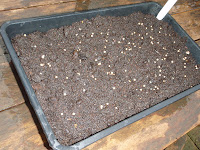 Firm it lightly, then sprinkle over your seeds. You can sow more thickly than you usually would, because you’re not trying to raise fully-grown plants. Cover the seeds lightly with soil. Then – if you’re sowing early in the year – cover the seed tray with a plastic bag or its own lid (from April onwards, you won’t need the protective covering). Put it on a sunny windowsill and wait for the seedlings to come up – from 3 days in spring and summertime to a week or 10 days if you sow earlier.
Once they’ve germinated remove the lid. The next day, check to see if they need any more water. If in doubt, don’t water – you are more likely to drown emerging seedlings than to starve them.
Start cutting when the leaves are substantial enough – when the plant is about an inch or two high. Don’t be tempted to let them grow on – the tray is too shallow to let the roots develop properly and you’ll get straggly plants which bolt.
I usually keep a couple of trays going at once to keep the supply going.
Growing basil 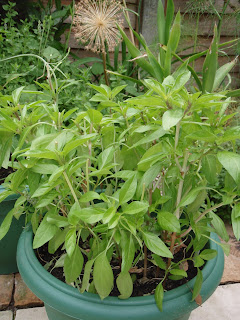