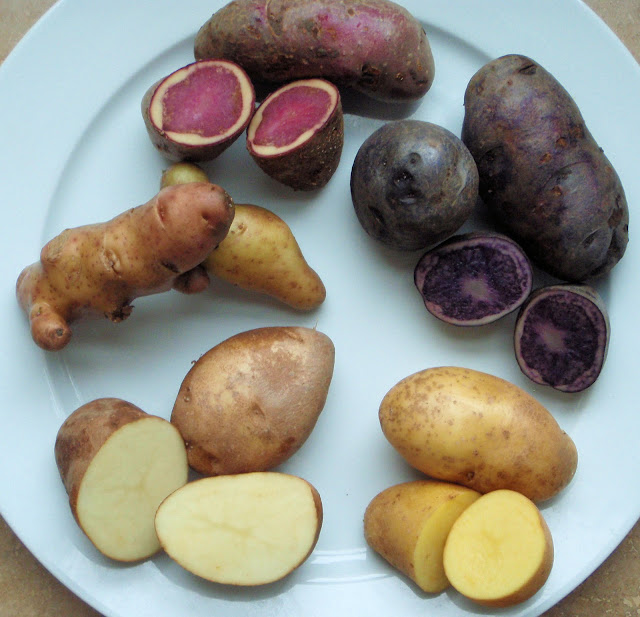 Clockwise from the top: Highland Burgundy, Salad Blue, Mayan Gold, Golden Wonder and Pink Fir Apple. Potatoes supplied by Carrolls, apart from the Pink Fir Apples, which are the ‘model’s own’, as they say.

Why bother to grow potatoes, you might wonder, when they are readily available in the shops all the year round and relatively inexpensive.

Well, aside from the obvious reasons – knowing the provenance of your potato, knowing that they haven’t been sprayed indiscriminately, the wonderful just-dug-up taste of new potatoes out of the ground – growing your own enables you to explore the many different types of potato you can grow easily here in the UK.

The types of potato stocked in the shops and supermarket barely scratch the surface of what’s available. There are something like 450 varieties of potato grown in this country alone. Types such as Kestrel, Desiree and Romano are prevalent in the shops because they are so versatile and are equally happy to be chipped, roasted, mashed or baked. For salad potatoes, you would be forgiven for imagining that Jersey Royals and Charlottes were the only types in existence.

In fact, potatoes come in all different shapes and sizes, from the long and knobbly Pink Fir Apple, to the tiny round Whitchhills. Their flesh has different textures, from waxy new potatoes, such as Lady Christl, for salad, to fluffy insides, like Golden Wonder, ideal for baking. (Golden Wonder is, needless to say, the variety used to make a certain type of potato crisp.) They also come in different colours, as the photo above shows. British bred potatoes tend to be white or creamy fleshed, while South American (also Spanish) potatoes are much more yellow in colour. But potatoes can also come in surprising colours: dark indigo blue, or crimson, for example.

I’ve been tasting some of the more unusual varieties in advance of the Secret Garden Club afternoon on potatoes this Sunday. I first roasted each of the varieties here with a little olive oil and salt for 30 minutes at 200 degrees C. Next, I cut a second batch into chips and fried them in vegetable oil for around 12 minutes.

Come to the Secret Garden Club on Sunday to join in our heritage potato taste test, along with tips on growing potatoes, ideas for growing them in a (very) restricted space, and MsMarmiteLover’s inspirational potato-themed feast to finish off the afternoon.