Jersey, is an island perpetually marooned in the English channel, lassoed to France one way and the UK on the other side. To the delight of its inhabitants, it’s always a couple of degrees hotter than the UK. My arrival during a stunning UK March meant that I was faced with what Jess Cartner-Morley, the Guardian fashion editor, calls ‘the tights crisis’.
I was invited to find out about the champagne of the potato world, Jersey royals, grown by around 20 farmers on Jersey nowadays, down from several hundred farmers a few years ago. 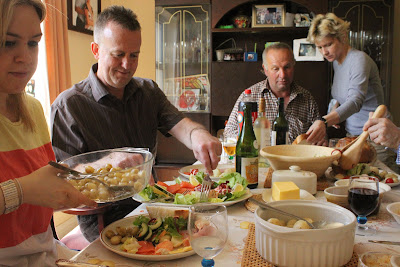 I spent a memorable morning on Christina and Didier’s farm on the raised North side of Jersey; the entire island tilts downwards towards the south, from craggy tall cliffs to wide white sandy bays. For lunch Christina gave us ‘cabbage’ loaves; refreshing sweet French cider, lightly petillante; Jersey cherry tomatoes; Jersey seafood including lobster and Jersey Royals cooked three different ways. Christina is adamant about “not crushing”; her preferred method of cooking is simple, boiled al dente, leaving on the thin skins, with a large knob of butter and a scattering of chives or fresh mint. The very tiny ones she sautés “Kids love them, I could never make enough of them. They ate them like sweets.” Didier sends packs of the new season Jersey Royals to his kids, at university in the UK.  Didier’s parents came over from Brittany after the second world war; the next wave of immigrants were from another island, Madeira and today the labour intensive work is done by Eastern Europeans. Jersey Royals are chitted, sorted, graded, planted, ploughed, each and every one, by hand on steep slopes or ‘cotils’, where it is impossible to use machinery. Jersey ‘beans’ (the name for the inhabitants, also ‘qualies’ and ‘crappos’, toads) are resourceful, every inch of land is cultivated. Each cotil is intimately known by the farmers; which ones suffer from frost, which earth is dry or wet, how sandy or loamy the soil is. The yield is often very low.

The farmer worries constantly about the weather. Didier even gets up in the night, if there is a chill, to wrap his Jersey Royals in fleece. Christina, despite receiving a tractor for her 25th wedding anniversary as a present, often feels neglected in the marital bed. She didn’t want to marry a farmer, but having met Didier on a night out, it was clear he was the one. But her children, she hopes, will do a better paid job, in the ‘professions’, with shorter hours. Out of the 98,000 population, only half of that is Jersey born and bred. The younger Jersey ‘beans’ prefer to go to university in the UK, study law and finance amongst other subjects, only returning in their 30s when they decide to have families and settle down. Farming work is done by immigrants. In Jersey they control immigration by granting ‘qualifications’ giving the right to buy or rent housing, after a certain period of living there. (Hence the nickname ‘qualies’ for those who possess qualifications to buy a house on the island).
Jersey Royals, in ideal conditions, start at the end of March and last till the end of June. We are now moving from the indoor season to the short outdoor season. It’s an important crop for Jersey: fifty percent of Jersey’s export market is comprised of the royals. They command a premium price, but the UK is pretty much the only market, although the French market is being worked upon. (I remarked that the skins might be a stumbling block to gaining popularity in France; I once cooked new potatoes, leaving on the skins, for Parisian friends who were horrified by this practice).

But, as Michelin star chef Richard Allen remarks, who gave me a virtuoso demonstration of different ways to use the potatoes, the flavour is in the skins. Jersey royals can have a slight coppery flavour just under the skins, which recalls ‘newness’, freshness and Spring (rather in the way that vinho verde wine does). Their distinctive taste comes from the fact that they are mulched with seaweed or ‘vraic’. I was struck by the amount of work that goes into growing Jersey Royals. People don’t want to spend much on food, perhaps they regard it as a right, like water or air, but all good food requires many man hours, from growing to picking to storing and then again, in the preparation and cooking. Good food doesn’t come cheap.
I will be doing a supper club on the 12th of May in which I’ll cook Jersey Royals and explore other delicacies of this island; the seafood, the dairy, the black butter with notes of liquorice and apple and other goodies. Book here: http://www.wegottickets.com/event/157480

Previous Post: « Events coming up at The Underground Restaurant
Next Post: Midnight plane to Georgia: Part One »