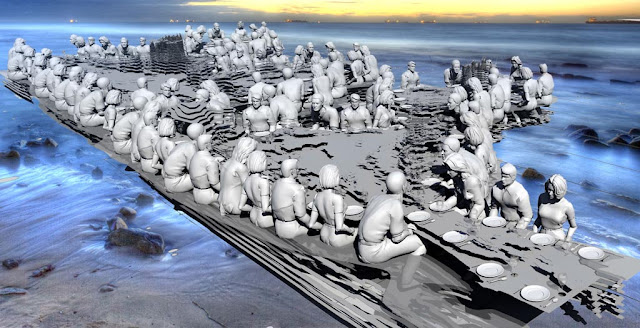 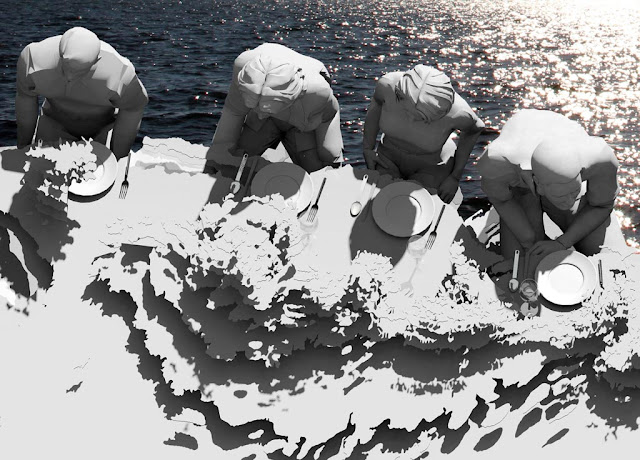 Alex Haw is a nutter. But a sexy, driven, rambling, hard drinking, crazy, talented architect nutter with a split in the back of his trousers, tousled rock-star hair, and oozing with concepts and ideas. Imagine an architect version of Dennis Hopper, the caged photographer in Apocalypse Now.
And I’ve linked up with him, God save me, to put on this mega-production ‘Global Feast’ which will start on the 25th of July, ‘arriving’ in West Africa, moving incrementally, by 20 degrees each night,  across the globe in culinary terms, and featuring innovative chefs and supper clubs and ending on the 13th of August when we land in Rio. It’s easily the most exciting food event going on this games.
The table that Alex has designed will be 20 metres long, 6 metres wide in part and 2.5 metres tall (around the Himalayas). It’s a sculptural contoured depiction of our world as a table that seats 80 people.
London is multi-cultural and the food in the UK has undergone an incredible renaissance, a revolution even over the last few years. We want to celebrate that. We want visitors to Britain and London to get a whiff of authentic London. It all takes place in Stratford Old Town Hall, opposite the games.
Each night there will be food and music and talks. Most nights it will cost £55 which includes canapes, a three course meal and alcohol.

Here is the line up of chefs:

27th of July: Opening ceremony at the olympic games: tickets are £100 including cocktails all night
Book here

Starters: Aoife Behan of My Home supper club and Jelly and Gin (representing Scotland and Ireland)

Sally Butcher, author of Veggiestan and owner of Persepolis

2nd August: Russian night with Vodka from Ivan the Terrible

Scott Ball of Kooky Bakes  and The United Plates of America supper club (from the United States)
10th August: Mexico and central america

Kerstin Rodgers aka msmarmitelover (in my heart I’m from Jalapa)
11th August: Caribbean

Martin Morales of Ceviche restaurant and pop ups (from Peru)
13th August: Argentina and Brazil Closing Party (and Rio is where the next games will be!) with Argentinian wines from Vinalba

Kym Kamel of The Shy Chili Supper club (from Brazil)
Overall booking page here.
More news, chefs, menus and sponsors to be announced.
Go to the website: GlobalFeast2012
Like us on facebook: Global Feast on facebook
Do come. Support us. We are not corporate. Let us show the world who we are.