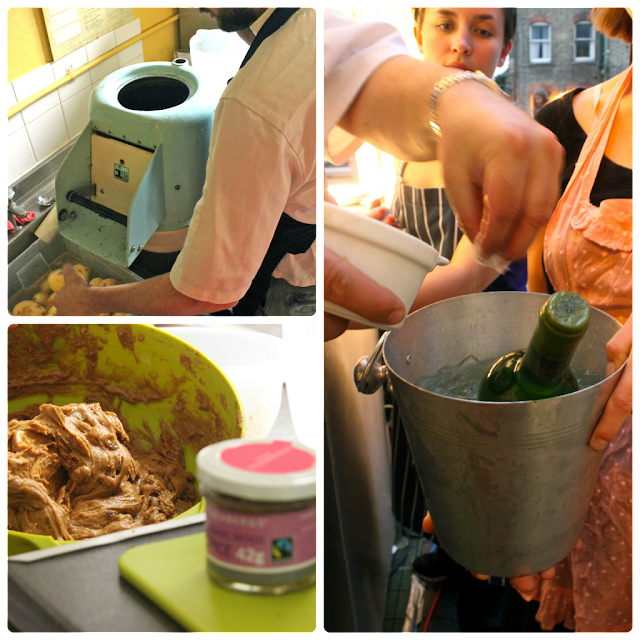 Chef Col has a machine; it’s called a ‘rumbler’. When Chef Kiren turned up today, he nodded approvingly “that machine saves me £400 a week in wages. Before I employed someone just on potato peeling duty, but the rumbler does it now.” He showed me: you just tip in the dirty potatoes with a jug of water. Around the sides of the machine is sandpaper. The potatoes dance, the sandpaper rubs off the skins, the water turns brown and the spuds emerge white and shorn, their virginal flesh showing beneath the hirsute clothing formed by months growing in dirt.
Col has lots of tricks. A lukewarm bottle of white wine? Put it in ice, throw a handful of salt into the water and the temperature will plummet in double quick time.
Today was the turn of the British at the Global Feast for we arrive at 0 degrees longitude, Greenwich Mean Time. The line runs through Stratford, shimmying through the bed shop on the corner near Stratford Town Hall, where Global Feast is located. Aoife Behan, who comes from Ireland but lives in Edinburgh and runs a supper club called My home and has since expanded to roving pop up merchants Jelly & Gin, made canapes and the starter. The vegetarian haggis bonbons, sponsored by MacSween, went down a treat, as did her thick cut home-made oat cakes, topped with Isle of Mull cheddar from Neal’s Yard Dairy and Aoife’s beetroot chutney. I’ve never tasted haggis before, vegetarian or otherwise, and it is not scary at all, just good tasting.
Denise Baker-McClearn of the Moel Faban Secret supper club got the train from Wales to East London to represent the principality. She spent the morning baking: Bara Brith tea loaves for icecream and gingerbread infused with exotic flavours, part of Britain’s seafaring past, from Steenbergs Organic Fair trade spices.
My contribution was fish, chips and peas served in a cartographical cone with a dollop of home-made tartare sauce, piquante with gherkins and capers.
Later, as light faded, a roar grew overhead, heads shot up as a flypast zoomed over, trailing red, white and blue. Champagne and Courvoisier cocktails were served as Danny Boyle’s affecting opening ceremony beamed across the table. If you couldn’t be there, Global Feast, right next door in Stratford, was the next best thing.
British menu:
Cocktails from Courvoisier
Oat cakes with Isle of Mull cheddar, beetroot chutney.
Tartlettes with Welsh shitake mushrooms, and oak smoked tomatoes.
Marmite on toast with silver leaf.
Mixed leaf salad with Strathdon blue cheese, pickled cherries and radishes, toasted oats and violas.
Pollock in beer batter, twice cooked chips, petits pois à l’anglaise and tartare sauce.
Bara Brith icecream, gingerbread, vanilla caramel with a shot of Welsh whisky from Penderyn
Globe pops 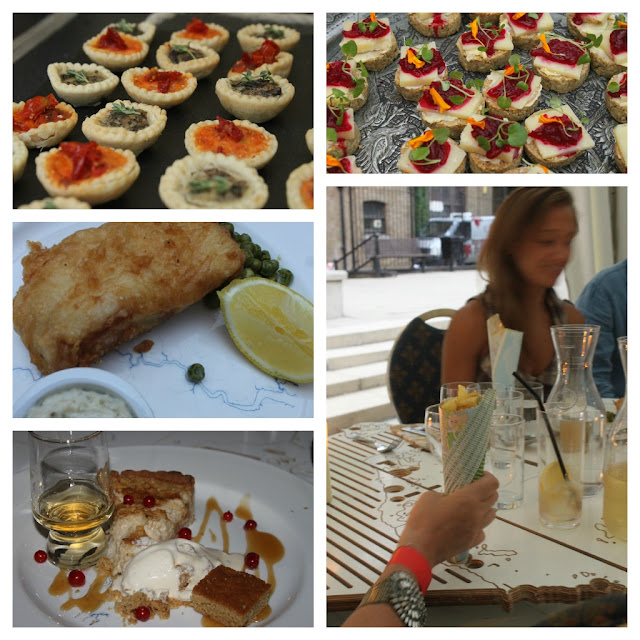 Book here for the rest of the world 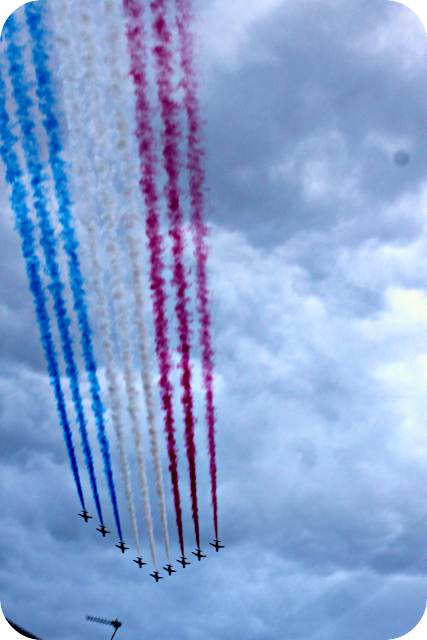