Three Easts in a row: Eastern Europe, East Africa and now the Middle East. As Jim Morrison intoned in The End ‘West is the best baby’ but this isn’t true when it comes to food. This supper was cooked by our guest chefs Sabrina Ghayour and Sally Butcher. Sabrina’s family comes from Iran and she hosts a regular supper club, highlighting Persian food, in London, while Sally Butcher, author of one of my favourite cookbooks ‘Veggiestan’, runs a foodie treasure trove of a corner shop called Persepolis, specialising in Persian ingredients, located in Peckham. Her husband Jamie is Iranian, he imports the exotic and unusual food for Sally’s shop.
The kitchen rang to the sound of the Farsi being called out over the steaming pots and pans as Sabrina and Jamie spoke. Sally, with her shock of red hair and purple dress, quickly put together the hors d’oeuvres and starter. Lebanese wines, petrolly and vital, were provided by Wines of Lebanon, to the  vocal appreciation of our guests. We started with rosé from Domaine des Tourelles and then both a rosé and a full bodied red by Chateau Ksara. It’s such a treat to drink wine properly associated the cuisine of the region.
Persian cuisine loves sour flavours like barberries, preserved lemons, fresh yoghurt, pomegranate and sour cherries. It also uses pungent rich ingredients such as rose petals, slivered pistachios, almonds, walnuts ranging to bitter flavours such as dried orange peel. Many of these ingredients were provided by Sally’s shop Persepolis.
Like Georgian cuisine, Persian food boasts a high proportion of fresh herbs; thin bread called Lavash, one of the oldest breads known to mankind, is folded around long washed sprigs of mint, basil, dill and parsley.
The vibrant Sabrina Ghayour strode in, prepared to go 10 rounds with head chef Col but they soon resolved any hierarchical battles with a mutual love of big hearty flavours. By the end they were cooing at each other over the roast poussins. Every day new chefs are arriving and we adapt to their style while they equally have to learn our system, now ‘honed’ or thereabouts, after ten days on the job. We are weary however and when Sally arrived in the afternoon, things looked a little chaotic with washing up from last night still to be finished. Our KP, Mat, is working like a dog for 14 hours a day and yesterday looked hollow and exhausted. We all have our low points on this job. He’ll pick up.
I’m staying at the town hall now. I spent the first night sleeping in an armchair in the dressing room but Col has now lent me an airbed. Living here is surreal, like something out of The Shining, all swirly plush carpets, ballustrades, corridors, endless doors with numbers on them, freakishly tasteless municipal flower arrangements. I’m near the Mayor’s office. Watching the actual Olympics (as opposed to my own culinary marathon), on a sofa pulled out into the centre of the entrance hall, I felt like I was squatting a posh building and treating it like my living room.
Mapkins: I got napkins made up in scarce map fabric, we only had 50. Now we have 45. Sally drew my attention to the well dressed lady who had neatly folded a mapkin, placed it under her chair on the top of her handbag. She was clearly trying to nick it. “I’m a shopkeeper, I notice these things” said eagle-eyed Sally.
Later when the guest wasn’t looking, I dipped under her chair and retrieved the napkin.
Note to future guests: please don’t steal the mapkins, I need them for Bestival and I can’t find any more fabric. 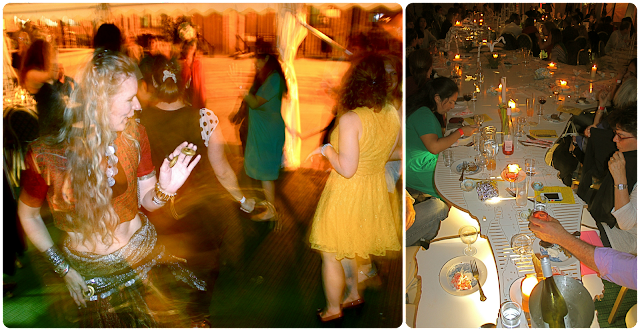