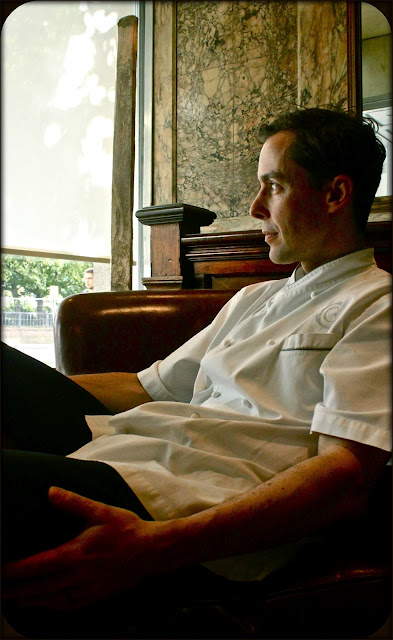 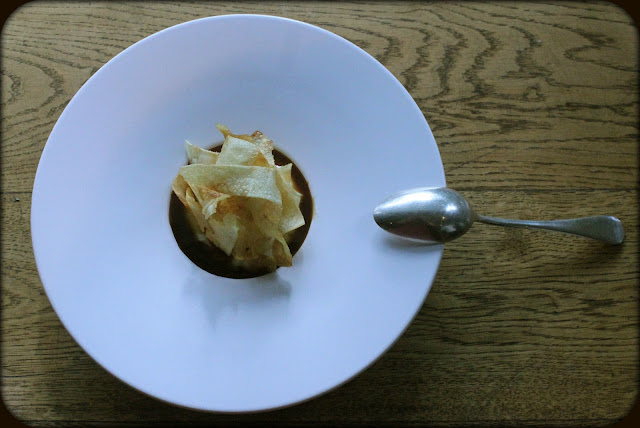 One of my favourite cookbooks, with stunning photography by Jean Cazals, is Cuisinier Gascon by Pascal Aussignac. It centres upon the cuisine of Les Landes, on the Atlantic coast of France. It is very meat-heavy, with a concentration on foie gras, which I totally disagree with, nevertheless the beauty and originality of this book shines through.
Chef Aussignac, a Puck-like figure who looks at least a decade younger than his 42 years, came to London 13 years ago. He was trying to set up a restaurant in Paris but new ventures are difficult in that anti-entrepeneurial country. He and his business partner decided to open near Smithfield market in London, which was, at the time, a bit of a culinary wasteland apart from St. Johns Restaurant and Maison Novelli. Their restaurant, Club Gascon, was an immediate success, there were literally queues around the block. “Before la crise” Pascal told me “bankers and people from the city would come for lunch and they wouldn’t leave. They’d sit around smoking cigars and drinking Armagnac, doing business all afternoon. It was like a gentleman’s club. In fact we had to ask them to go before the dinner service. Even the staff lunch had to be eaten next to them. Now of course it is different.”
The financial crisis of 2008 has changed everything, especially for high end restaurants. Restaurants everywhere suffer, but particularly those that rely on expense accounts. (You can always tell how good business is for posh restaurants by how many expensive bottles of wine they sell. On my visit to L’Anima a year after the crash, they’d only sold one £800 bottle of wine in the previous six months whereas before they sold several each month.) This probably explains the trend towards more casual dining: supper clubs, street food, no reservation hip themed restaurants such as Meat Liquor and Spuntino. The emphasis is on fun rather than fine.
Smithfield also has changed with successive waves of new restaurants: Hix and John Torode’s restaurant, Morgan M, Modern Pantry, Vinoteca, Bruno Loubet and now yet another branch of Polpo. As this area has very little residential housing, and remains fairly empty on weekends, it will be interesting to see how many of these restaurants can survive in a flatlining economy.
Pascal Aussignac is frustrated that more hasn’t been done with Smithfield, expanding the meat market into vegetables and flowers. “In an instant” he cries “this area would become the place to go to at weekends, like Borough. Unfortunately the butchers don’t want it and the Corporation of London, who manage the area, will not consider it. There is an empty market here and plenty of parking. It’s perfect!” Aussignac lives in the area, next door to his restaurants. This is a man who lives and breathes his job. He’s actually in the kitchen during each service, in the sauce station. He’s not in Hollywood hanging out with Posh Spice nor is he pontificating on telly. He’s there, cooking, every day.
Spending a couple of hours with Chef Aussignac, one is struck by his sensibility. Fine-boned and elfin, with facial expressions shifting between a young Al Pacino and the French comic actor Fernandel, we talk about the differences between London and Paris. How nobody looks at each other in London which is simultaneously alienating and freeing. How Paris is locked into itself, ‘coincé’, with secret codes of behaviour and dress. The importance of the number ’13’ to Club Gascon, whether it is lucky (French) or unlucky (British). He also worked near Grimaud in the South of France, where I spent a year. We talked about the Cannes film festival and movies and Godard, bloody Godard.
He continues the French tradition of the philosophic cultivated craftsman, the Eric Cantona of cooking. The only child of a single mother, there is also something quite fragile about him, but also very intense,  very driven. His artistic hand is evident throughout Club Gascon, from the exquisite hand-made plates to the floral arrangements, which he does himself, rising at 6am every Tuesday to buy the flowers at the market.
He made for me a vegetarian adaptation of his winning dish at Taste of London. I’m not a fan of this upmarket overpriced food fair (in fact I’ve often thought about squatting it) but Pascal says it is one of the few occasions where he can spend time, four days!, with other chefs of his stature.
The dish fuses a classic British ingredient, Marmite with a traditional Auvergnat dish, aligot. He calls it La Duchesse de Marmite (after pommes duchesse). It has a couronne (crown) of deep fried crisps. No dish uses more than three elements. So here we have potato both purée and fried, cheese (Tomme) and Marmite. 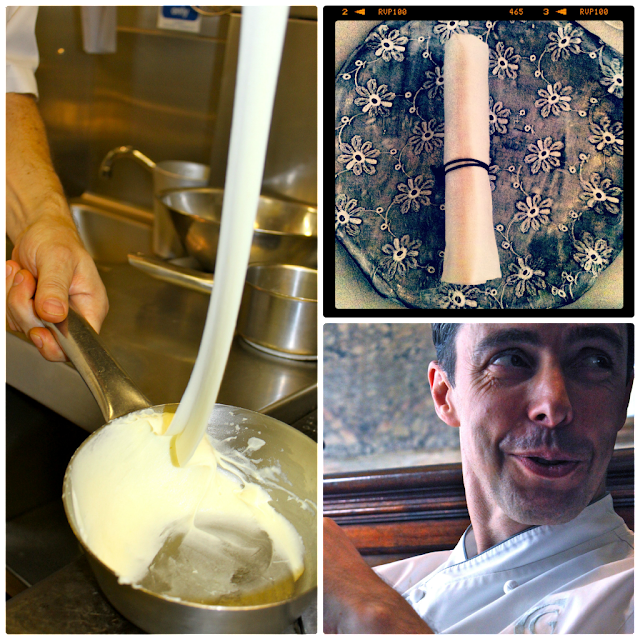 Book for Club Gascon here.
Lunch is only £25.
The Cuisinier Gascon book.

Previous Post: « Light lunch for a city summer
Next Post: Isle of Wight tomatoes with recipe for pizza »