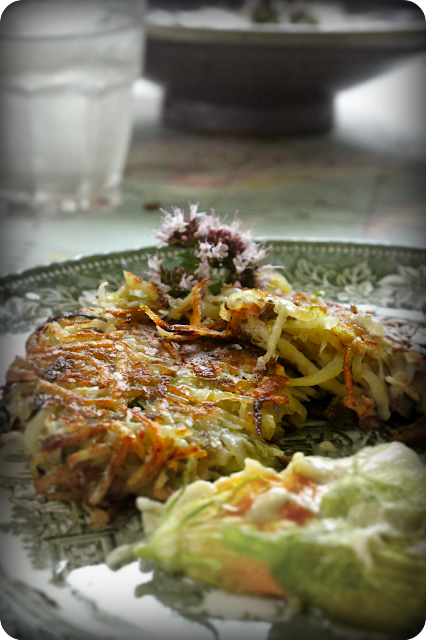 What I eat is dictated by the weather and this weekend, despite the muggy suffocating heat in London, I decided to stand by my Aga and cook. My parents had come over and I had no food in the house.
But I do have food in the garden. My dad and I dug up some of the potatoes including the purple skinned heritage spuds. I had plenty of courgette flowers, some tiny cherry tomatoes, a few herbs flowering and going to seed. What can I make?
I’m often inspired by colour when it comes to composing a menu. The purple and green spring onions I have in my fridge and the mauve potatoes….a Swiss rosti? garnished by the purple flowers of Oregano. Where did that idea come from? The last time I had rosti was on the Annapurna trek in Nepal, where every teahouse served it for dinner.
So I grated and chopped. My parents waited. The sweat dripped and the onions sizzled. The air was still as I fried. Even the activity of the flies and wasps seemed half-assed. I had squeezed the liquid out of the strands of potato and onion, the pale green and the purple threads (I kept the skins on). A rosti must be as dry as possible. I was dubious about this rosti however, I’d never made one before. Would it be raw inside?  Does raw potato straw just cook?
I served my purple and green rosti with pale chartreuse coloured cucumber salad and cream, some stuffed baked courgette flowers, a glass of teensy tomatoes picked before blight hits, and sprinkled on the herb flowers.
A clinking of knives and forks, scrapings and sloppings were heard. Then a voice, my mum: “Can I have some more?” My dad and daughter eyed the remaining rostis, awaiting seconds.
I tasted. A rosti has a textural mouthfeel. The crispy strands on the outside were crunchy and satisfying, the insides perfectly cooked. I always want crisps, salty and oily, when it’s hot. The rosti fulfils all of those needs and more.
I made a cocktail of Rhubarb flavoured Chase vodka, frozen flower icecubes and soda water to wash it all down. The parents were impressed.
Pudding was a plate of Smarties. 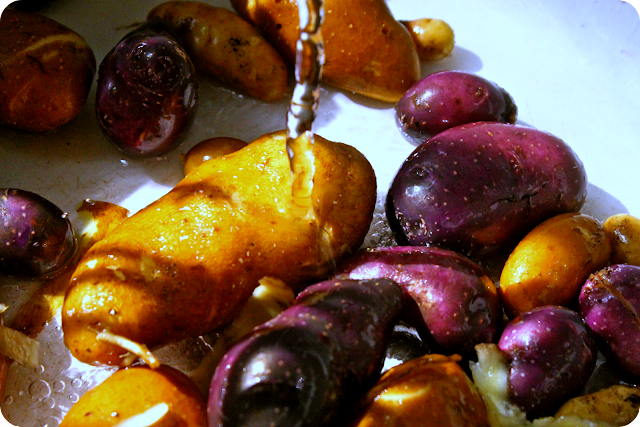 Put the spring onions and potatoes through the food processor grater, or grate them by hand.
Putting a handful in your palm, squeeze any liquid out of it and put into a bowl. Continue until you have squeezed dry all the mixture.
Then mix in three eggs and the parmesan. Season to taste.
Squeezing a small handful of mixture, place it in a frying pan of hot olive oil. Press it down with a fish slice. Continue to add small mounds of mixture to the pan, leaving space for pressing down between potato patties.
Allow the bottom to go golden then carefully flip over the rosti.
Fry until both sides are golden. 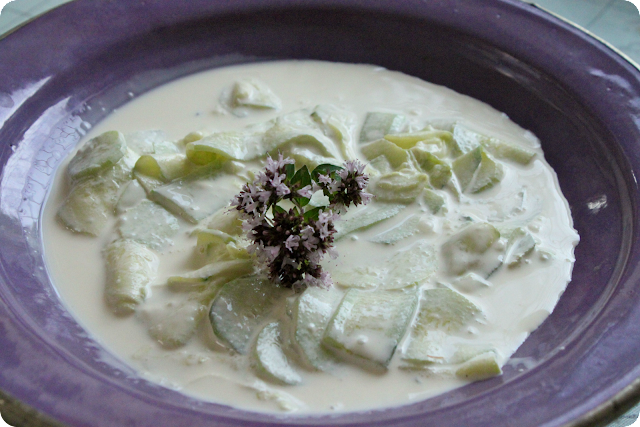 This is like a really sinful version of raitha, the yoghurt and cucumber salad.

Serves 5 or just one person, in front of the telly, bowl in lap.

Use a mandoline. Really. Buy one here. I’ve got an old wooden French one.

Cover the cucumber slices with salt. Cover and put in the fridge. Then drain off the salt. The cucumber are seasoned and crispy. Put in a nice bowl and cover with cream. Add a sprig of herb flowers. 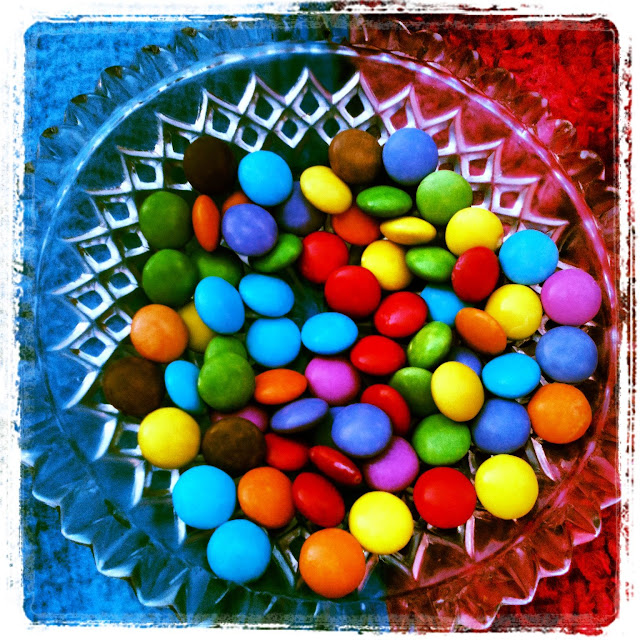 Previous Post: « Beyond the conflict: Israel, blogging and a recipe for tofu shakshouka
Next Post: The Duchess of Marmite: Club Gascon »