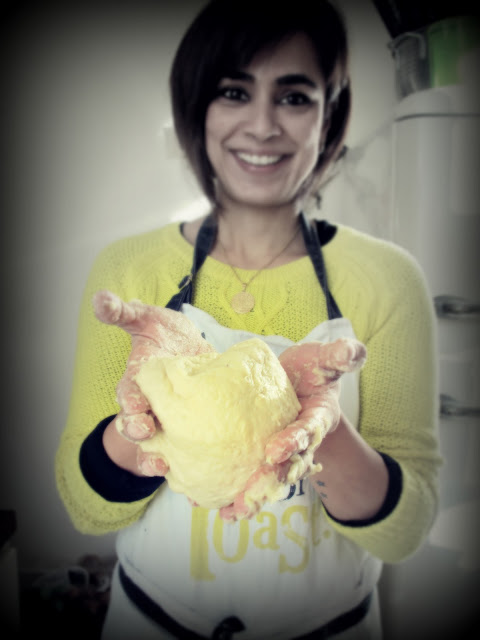 I’ve never liked shop bought naan bread and Sumayya, who came over to help me cook for the Secret Garden Club workshop/supper ‘How to grow your own curry’ (to find out more click here),  explained why: it’s made with yeast rather than bicarbonate of soda and baking powder. I was also interested in whether an Aga can act as a tandoor oven. I whacked up the Aga as high as it would go, safely, which turned out to be about 260ºc. A tandoor can reach temperatures as high as 480 ºc. Most domestic ovens will not go above 300ºc. I could probably push my Aga up to 300, but the mercury will go into the red and that makes me nervous.
So, a hot oven is needed to make naan, just like a pizza oven. With a tandoor oven you slap the tear shaped breads around the clay walls which are even hotter than the interior. You also spray it with water to create steam and humidity.

Sift the flour into a bowl and add the rest of the dry ingredients. Add the egg and the yoghurt, kneading the mixture in a bowl. Finally bind together with some whole milk until you have a flexible dough mixture.
Before leaving the dough to rest, coat the dough ball with ghee. Leave, covered in cling film, for an hour.
Then taking a palm’s worth of dough, make a round ball.
Scatter some flour onto a clean surface and roll out the ball into an oblong or tear drop shape.
Pierce the naan all along it’s surface with a fork.
Then mix some ghee with some milk onto your fingers and smear it all over the top of the naan. This will make it moist and soft and enable the seeds to stick.
Sprinkle the Nigella and Poppy (white is more authentic) over the top of the naan.
Place the naan on the top of the oven on a cast iron crepe pan (these are fairly inexpensive in French supermarkets, under 30 euros, well worth the investment, or get one here) or a flat wide cast iron frying pan.
Even if you put the naan in the oven afterwards, placing it in a crepe pan enables it to keep it’s shape.
After the bottom of the naan browns, lift the naan with a fish slice and put it on the floor of the Aga. Spray or sprinkle some water into the oven then shut the door.
It takes around 5 to 7 minutes to cook. You will see it puff up and bubble. This is very exciting.
Once you take the naan out, add a little more ghee to the naan. Sumayya made a ‘bag’ out of tin foil to keep the naans warm while the rest were cooking.

You could also make sweet naans with cinnamon or cardomom. Next I’m going to try to make a Peshwari naan with marzipan and raisins.

As Sumayya and I cooked, we talked about the differences between Pakistani food and Indian food. What we think of as ‘Indian’ in the UK is mostly North Indian food which is very influenced by Mughal/Mughlai cuisine, is rich, full of spices, with a cooked down sauce. Mughal cuisine is Muslim and therefore contains meat. (I remember ordering my usual take out selection for a friend from Manchester who, at the end announced, ‘I’ve never had Indian food without meat before’). The Mughal culture and emperors originated in Persia and further back, Mongolia, so contains those influences also.  Of course most of India is vegetarian and to my taste, the best Indian food is contains the rich sauces and spices of Mughal food combined with Hindi vegetarian food.
But in the villages of Pakistan few people can regularly afford meat. They eat seasonally, plenty of vegetables and, to my surprise, not heavily sauced or spiced. Sumayya cooked a delicious sweet potato and tomato ‘curry’ which was actually quite plain, with little or no heat, not at all what we think of as Indo-Pakistani food. Pakistan is geographically quite an arid country and therefore more dependent on meat even without the differences between Muslim and Hindu religions. Pakistani cooking uses less mustard seed, curry and Hing (which is a souring agent).  In the villages they flavour their vegetables with cumin, nigella and coriander, because they can grow them easily.
Pakistan is a comparatively young nation, just over 60 years old, but despite partition, many vegetarian Hindus decided to remain there likewise many muslims stayed in India.
Sumayya runs a supper club in Maida Vale (ish), teaches Pakistani cookery and has recently appeared on Madhur Jaffreys’ show ‘Curry Nation’. She can be found @pukkapaki on twitter and on her blog.