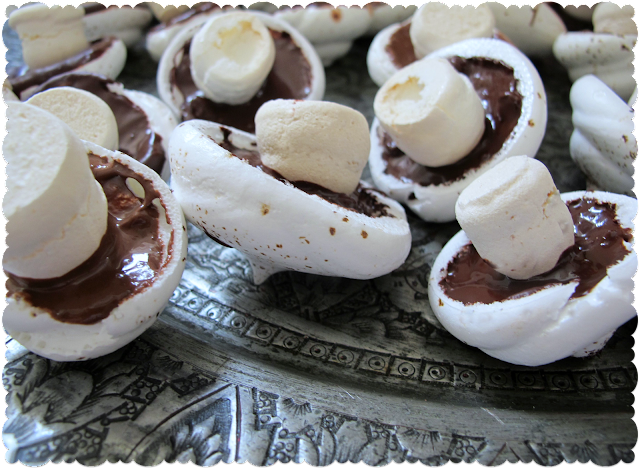 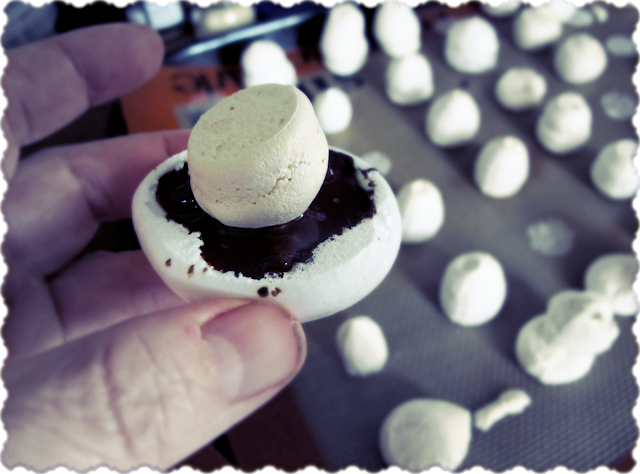 I’ve been wanting to make meringue mushrooms ever since I made a Christmas log cake. I’m not crazy about Christmas cake or Christmas pudding so I tend to go continental at Christmas and make the log instead. Now what goes on a log? Mushrooms of course. It seemed also a good idea to surround the gingerbread houses I made for the Ocado Scandinavian supper club with some fantasy edible mushrooms. The North Pole myths of flying reindeers derives from the fly agaric mushrooms they eat.
I tested a couple of recipes but recommend Joy of Baking’s recipe (she really is brilliant and so dependable) but I added a couple of tweaks: liquorice and chocolate. Just like Scandinavians, I love liquorice, especially the salty kind.
I played around with liquorice meringue recipes, melting liquorice and using essence of Liquorice but all I got was ugly brown meringues. Eventually I figured out the best method is to get some hard liquorice candy and grate it onto the meringue tops. The flavour is delicious.
Get some disposable piping bags as you are going to be doing alot of piping. I’ve doubled the recipe, so if you screw up a bunch then you have plenty more.

Some red food colouring (if you want to make magic toadstools). (Food colouring pastes are the most intense).

Whisk your egg whites (I hope you have an electric beater) until they form soft peaks. Add the cream of tartar and the salt. Then add the sugar, slowly, while continuing to whisk on high speed. Eventually it should look glossy and stiff.
Using a tall jug or glass to hold your piping bag (folded back so you can get the mixture into the pointy bit), scoop half of the mixture into it). Cut a point off the end. Not too big. Remember it’ll get bigger as you pipe.
Put a quarter of the rest of the mixture into another bowl and mix it with some strong red food colouring.
Save the rest of the meringue mixture for sticking the tops and bottoms of the mushroom meringues together. Keep this in an air tight container or another piping bag.
Lay out as many flat baking sheets as you possess, covered with non stick parchment or, (I keep telling you to buy these and I hope you have), even better, silpats.
Pipe the stems: holding the bag upright over the baking sheet, making sure it’s CLOSE to the paper, pipe a sort of cone shape. With a wet finger, slightly flatten the top, you need it flat so it fits onto the cap of the mushroom. Some of the stems will fall over so pipe plenty. You want them straight and upright.
Pipe the caps: this is easier. Pipe circular rounds until it’s about 2 cms high and 5 cms in diametre. Again smooth the top with a wet finger. 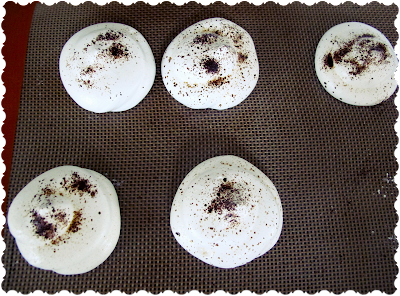 Then grate the liquorice candy on top of the cap. 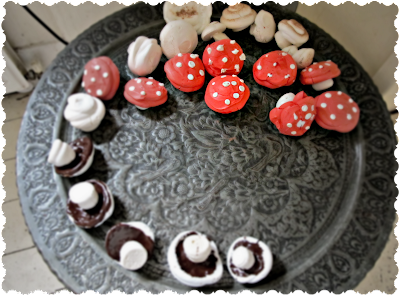 For the toadstools, pipe the same cap in red.
Bake the caps and stems on a low heat oven (around 100-140ºC) for about an hour. Make sure they don’t go brown.
For the toadstools, make a teensy hole at the end of your piping bag and pipe little white spots onto the top of the red caps. Put back in the oven and bake for 15 minutes.
Now the white caps: once they’ve cooled you will notice that the bottoms of many of the caps are ‘dipped’ just like real mushrooms.
Melt your chocolate. (30 second bursts in the microwave are the easiest way to do this. Do it for any longer than 30 seconds though and you’ll have a disgusting burnt ball of chocolate).
Using a pastry brush, paint the dipped underside of your white mushroom caps with chocolate. Then stick the stem onto the underside. Leave to dry.
Handle with care or they’ll break.
With the toadstools, using the leftover white meringue mixture, stick the stems the red caps. Cap side down, place back in the oven for 15 minutes until they are dry.
It took me a couple of goes to get it right but very satisfying and magical. Let me know how you get on.
I will definitely serve these at my Hobbit meals at the Highgate yurt on the 15th of December. I think anything woodland is hobbitty don’t you?
Coming up:

Previous Post: « Video/Recipe: How to make naan bread
Next Post: How not to fuck up a Jansson’s Temptation »