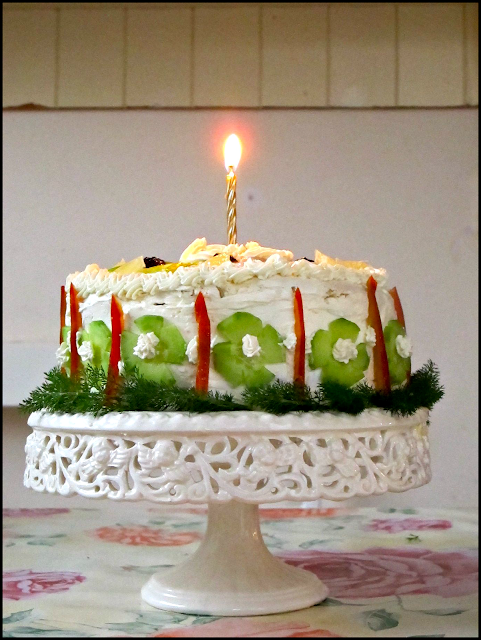 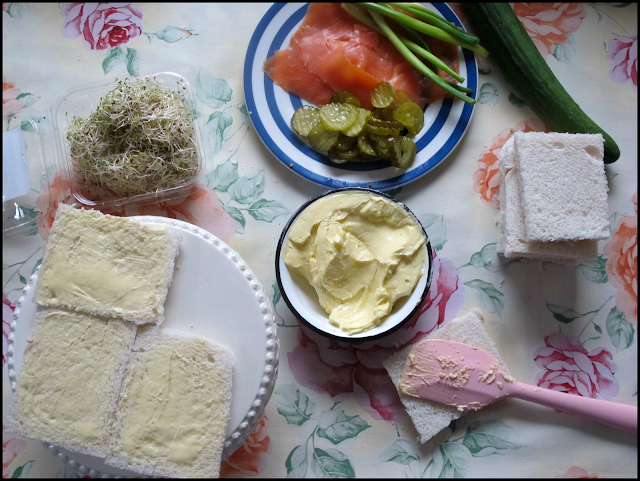 Smorgastarta, a typically Scandinavian sandwich cake, would be a fantastic showpiece for Boxing Day.
One wants simpler food after the belly stretching richness of the Christmas Day banquet, maybe sandwiches or the sharper, hotter tastes of foreign food. It’s a day to use up leftovers, turkey sandwiches, turkey curry!
This savoury ‘rainbow’ cake would be a great ‘carrier’ for leftovers. I’ve done this Smorgåstårta with traditionally Scandinavian ingredients such as smoked salmon, fish roe, fish roe paste from Kalles and pickled cucumbers. But do use up whatever is in your fridge!
My version is made out of Chorley Wood style sandwich bread, a nice slice of Warburtons or Kingsmill, which, though nutritionally deficient, can sometimes hit the spot.
This is also a very indulgent recipe, it’s far from low fat, I used shed-loads of butter.

Processed bread is soft and difficult to butter when untoasted. I have two tips for you:
I decided to make a round cake to make it look like a wedding cake but it’s easier to make a square or rectangular sandwich cake because of the shape of the bread. 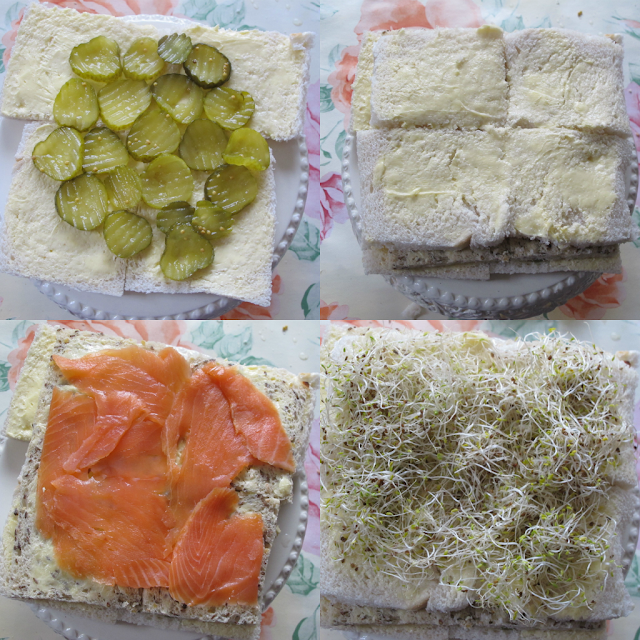 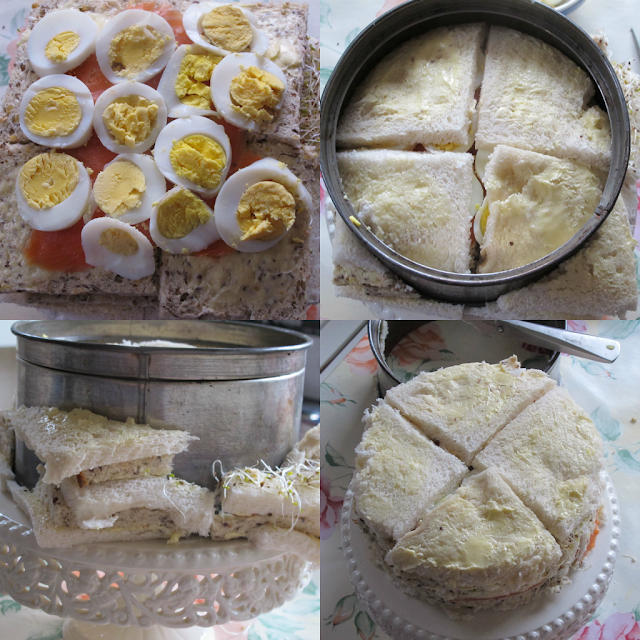 Ingredients
2 loaves bread, one brown, one white, crusts cut off
3 packs of Philadelphia cream cheese, whipped
1 pack of butter, whipped (or for a lighter feel, use mayonnaise on one side of the bread)
1 cucumber, cut finely
1 punnet of cress or alfalfa sprouts
1 jar of cod’s roe
1 large pack of smoked salmon
1 tube of Kalles caviar (available from Ocado and Totally Swedish)
3 eggs, hard boiled, sliced finely
I jar pickled cucumbers
2 spring onions, sliced thinly into lengths
1 bunch of dill
You could also add prawns, thinly sliced cheese, cold cuts, feathery dill sprigs, radishes, thinly sliced red pepper slices. Get creative!
Equipment
Cake stand
Cake tin with removable bottom
Sharp knife
Rubber spatula
Piping nozzle in a star shape
Method
First of all prepare your ingredients: cut off crusts with a sharp knife, whip the cream cheese and butter, cut up the cucumber and eggs.
On a cake stand (you may as well go for the full camp birthday cake look) start to assemble your bread, buttered both sides.
Do one layer with white bread, fitted together tightly, add your sandwich filling, mine was pickled cucumbers.
Then do the next layer with brown bread, position the slices so that they overlap the white slices underneath in a different direction. My next layer was smoked salmon.
I added a white bread layer with alfalfa sprouts then a brown layer with egg and salmon.
On each layer make sure you butter the bread both sides, this helps the cake to stick together.
You could use mayonnaise if you want it to be lighter.
Then place a round cake tin over the top and cut, with a very sharp knife, around the inside of the cake tin, cutting through the layers to get a round shape. This is admittedly a bit tricky, you might have to push the slices together a bit if they start to pull apart.
Discard the cut away corners or give them to hungry children/guests lurking about.
Then, again using a rubber spatula, with the cream cheese, lay what is called a ‘crumb layer’ around the sides and top of the ‘cake’.
Then cling-film the cake and cake stand and put it in the fridge for an hour or so to chill and harden.
When you’ve done that, add a thicker, smoother layer of cream cheese around the cake sides and top.
I then started to decorate the cake using:
And I piped more cream cheese around the edges of the top with a star shaped piping nozzle.
I think this is spectacular also for kids parties. 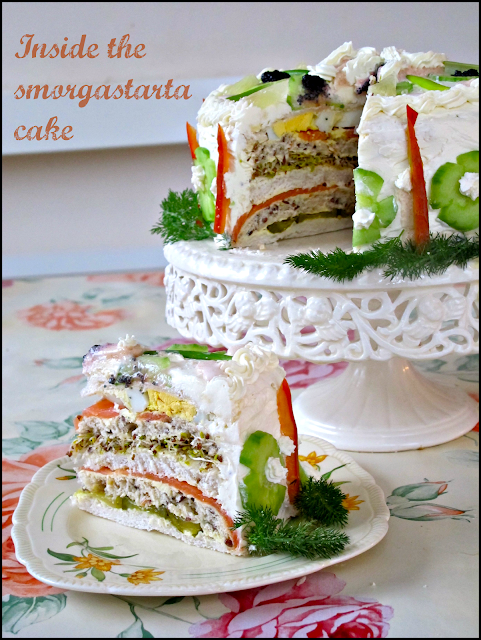