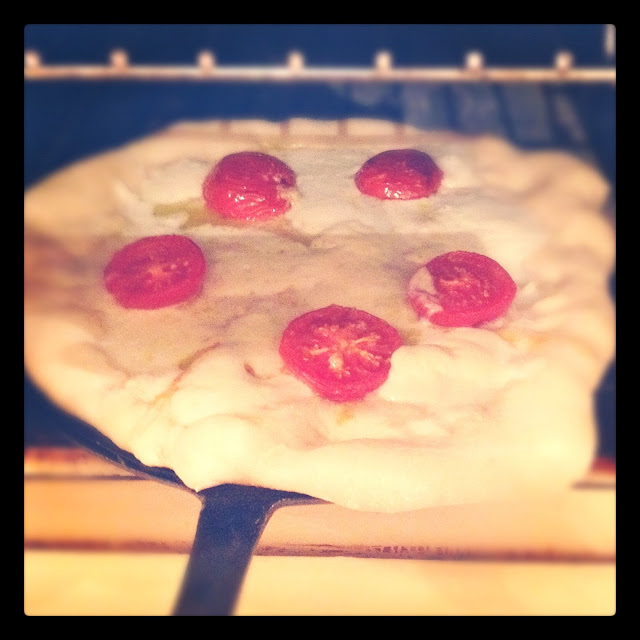 It was a small quiet Christmas this year with just my mum, dad and The Teen. My parents were a little reluctant to come over as they have no transport and we don’t have a TV. I gave them my bed on Christmas Eve and they put up with no telly until they got buses home on Boxing Day (there being a tube strike).
For Christmas Eve I made fresh pizzas, baked on the floor of the Aga (which I’d pumped up to it’s highest heat, note to self, always remember to turn it down afterwards or the oven may explode). Most domestic ovens don’t go above 230ºC-240ºC (464ºF) and you need over 260º (500ºF) for pizza. I can get the Aga to that temperature if I whack the knob up to the maximum a couple of hours beforehand. (I also flirt with the Neil the Agaman to get him to increase the gas flow to enable higher temperatures on his yearly visit.) I’ve heard some pizza freaks ‘cheat’ a domestic oven by baking the dough during the cleaning cycle when the temperature is higher.
I use my version of Richard Bertinet’s simple olive dough, made with a sourdough starter from the last batch, stretching it thinly over a cast iron crepiere pan on top of the Aga, similar to my naan technique, to seal the bottom so that I could shove it onto the floor of the roasting oven. All I want for christmas is a pizza peel!
A few hours previously, I had ‘sun-dried’ some tomato halves in the simmering oven. Before baking the pizza, I tore up a ball of good mozzarella, one per pizza, and thinly sliced, Goodfellahs style, some smoked garlic over the top. Once baked, blackened bottom and bubbly top, I sprinkled over some rocket and grated a frozen lemon (I now keep some in my freezer and add to everything, it’s good for your health) onto the pizza.

500g strong bread flour (of which 100g was sourdough from my last batch of pizza making)
20g semolina
50ml olive oil
10g sea salt
7g fast acting yeast
320ml water, luke-warm only, so as not to kill the yeast
1 tablespoon of honey.

Put the yeast, honey and water into a jug and let it froth. Mix dry ingredients together with the olive oil. I do this in my Kitchen Aid food mixer. Once you are sure the yeast is live and kicking, add to the dough and mix thoroughly for 5 minutes.
I then cover the bowl with cling film and wait an hour till it’s risen.
I cut the rise dough in half and using my hands, on a well floured surface, I try to stretch the dough into a circle, just like they do in pizzerias.
I top it with the mozzarella, tomatoes, garlic.
In the meantime I have heated my cast iron crepiere pan on top of the Aga. I sling the dough onto this heated circle to seal the bottom. I also cover the edges with a thin stream of olive oil.
Then I shove the pizza circle onto the floor of the roasting oven. If you have an ordinary oven, it’s worth buying a pizza stone or purchasing a square of marble to approximate the same effect.
Within 10 minutes the pizza is cooked. Pull it out, place on a large plate, and throw some rocket and salt over the top. You could add some thinly sliced parmesan too. Then, I grate a frozen lemon over the pizza.

Then having stuffed ourselves, mum, dad and The Teen came to look at my profile on an online dating site. I gave up for a while, despairing of the behaviour of the men on these sites. But now The Teen is at university, I feel I must make an effort.
Asian families help their children find a partner, arranged marriage seems to work, so why not ask for help from my parents? Ok I’m the wrong side of 40, but you never know.
My parents approached this as if I was asking them to look at hard porn.
After a few minutes, my mum declared that my profile picture looked “very nice”.
My parents only seemed interested in the men that shared their interests: for my mum, it was watercolours and my dad perked up when we found a man who goes skiing.
One of the candidates was called Mr Licky. I groaned. “Perhaps he works at the Post Office?” suggested my mum.
Another fancifully calls himself The Roaring Lion. He looks like he works in IT.
Most of them lie about their age.
While we were gazing, huddled around the glowing LED light of the computer, a very modern Christmas, my Teen said:
“I’m suspicious of men who are on a dating site on Christmas Eve”
“But we are on a dating site on Christmas Eve?” I counter
“Yes but we are doing it as a family so that’s ok”.