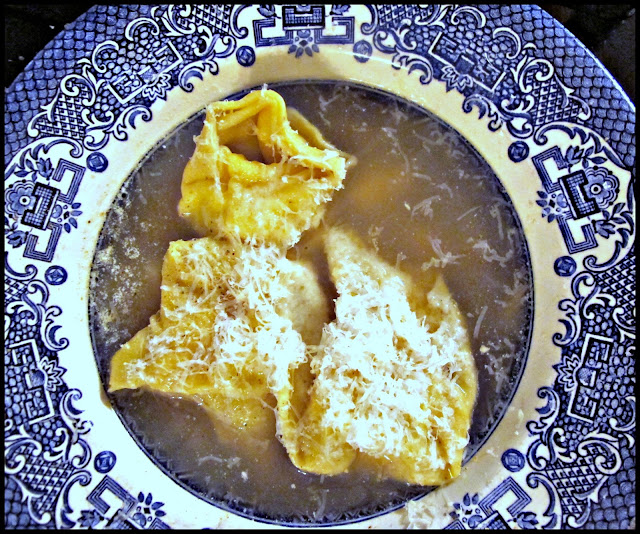 On Christmas Day, we ate shop-bought croissants before my mum and I started on the meal. My dad changed all my light bulbs, scrubbed my toilet with a toothbrush and Spirit of Salts then cleaned all the limescale off my bath. It was the best present. A couple of years ago, he spent Christmas cleaning all the stains off my upholstery. Under the sink at home, my dad has a kind of chemistry set of stain removers for every possible type of stain. He is also known as ‘Araldite Man’. Sometimes on a Sunday, he’d get out the Araldite, two tubes, mixed them together with a special little spatula and stick something together. He always had more than he needed and would call around the house for broken items to repair.
Meanwhile I decided to make an Italian starter which is traditional at Christmas: tortellini en brodo. It was beautiful, the stock was clear and light, the pasta silky and satisfying.
Fresh pasta is easy if you have a machine or attachments for your food mixer. It makes the whole process more or less effortless. Never ever wash a pasta machine or the attachments. They go rusty. 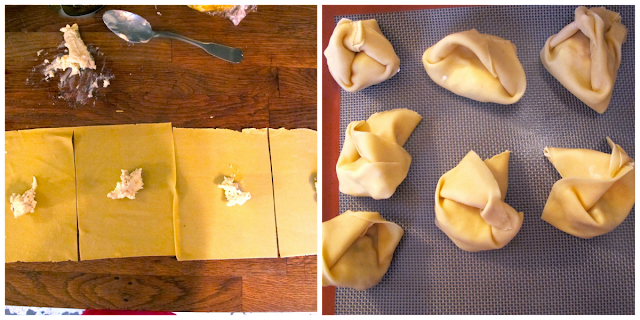 Here is the recipe for a vegetarian Tortellini en brodo.
Makes 20 tortellini

Put the flour, 3 eggs and salt into a food processor and pulse. When it looks like fine couscous, add the last yolk. Now it’ll look like big couscous. Take it out and knead with your hands. Cover with clingfilm and leave it to rest for half an hour.
Once rested (which makes it easier to handle, more relaxed), then cut off a section the size of a tangerine. Cling film the rest as you don’t want it to get dry.
Putting the dial of your machine onto the widest setting (1) put the section of dough through. Then fold over the dough and, open end downwards, put it through again. Keep doing this (folded over) until you hear a pop on the folded closed end of the pasta.
Then, unfolded, run the pasta through the machine, on a tighter setting each time, going through 2, 3, 4, 5, 6 and ending on 7. For tortellini or ravioli you don’t want the pasta so fine it’ll burst.
I laid out the strip of pasta, cut 6 to 7 cm squares and placed a small ball of Italian blue cheese in the middle. I seasoned the ball with salt and pepper. Then using the remaining egg white, I used a pastry brush to moisten the edges of the pasta square and folded it into a tortellini/loni shape.
Then I placed the tortellini onto a tray dusted with semolina. Although the filling is quite dry, it’s best not to let them touch each other. You want to make sure they don’t stick.
I then did the same process with each tangerine sized section of pasta dough.

I left all this to simmer for a couple of hours. Then I left the pan overnight. In the morning I strained all the vegetables into a chinois, pushing it down with my hand (or a wooden spoon), to get all the flavour out of the vegetables. Check for saltiness and add if necessary.

Just before serving, I heated up the stock until almost boiling point. I added the tortellini. When they floated, bobbing around on the surface, I used a ladle to put the stock into a bowl, adding 3 to 5 tortellini in each.
I added grated pecorino and white pepper. 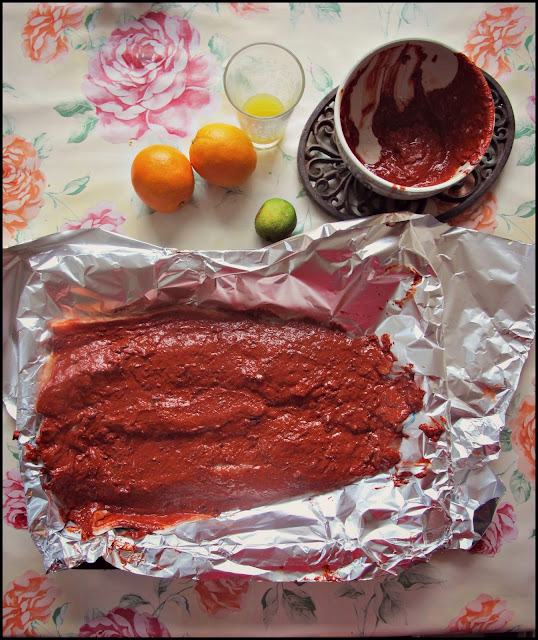 For the main course I made butterflied salmon (they can do it at your fishmongers) basted with a Mexican achiote, roasted and soaked Ancho chillis and citrus (orange and lime) paste. This would be even better on the barbeque but as it was pissing down outside, I roasted this in the hot oven of the Aga. We had this with brussel sprouts in red wine and roast potatoes and parsnips. Then as a ‘palate cleanser’ I made a Clementine and gold leaf jelly. This went down very well, exactly the refreshing break you need during a Christmas meal. I used a recipe from the Bompas and Parr Jelly book and then added my own tweaks. Yes I know using gelatine breaks the ‘meatless’ rule.

First squeeze the clementine juice into a jug. Then soak the leaves of gelatine in cold water.
Decide which jelly mould you are going to use. I used a copper pineapple mould. Oil it with almond oil.
In a glass jug, I mixed 2 of the gelatine leaves with a slug of Chase Marmalade vodka and then heated the mixture gently until the gelatine melted. (I did this on the black enamel of the Aga, but you could do it in a microwave (30 seconds) or in a saucepan. Don’t overheat). I then carefully, using a damp tine of a fork, placed the gold leaves into the jug and whisked vigorously.
I poured this into the jelly mould and placed it in the fridge to set.
I then mixed the clementine juice and the rest of the gelatine leaves, heating gently until melted. I let it cool and then poured this into the mould.
Place in the fridge for a few hours.
Turn out the mould onto a cake stand and your Christmassy gold leaf jelly will look beautiful. 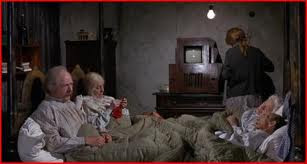 For afters, we ate steamed treacle pudding with creme fraiche. Then, end to end, just like the impoverished grandparents in Charlie and the Chocolate factory, we all sat in my bed, for I don’t have a sofa anymore, to watch a film we’d downloaded from itunes. The film, 2 days in New York, was crap. We liked 2 days in Paris but this was embarrassingly bad.
The other day, when I did a question and answer session for Stylist magazine, one reader commented ‘you are living the dream’. I cannot disagree.