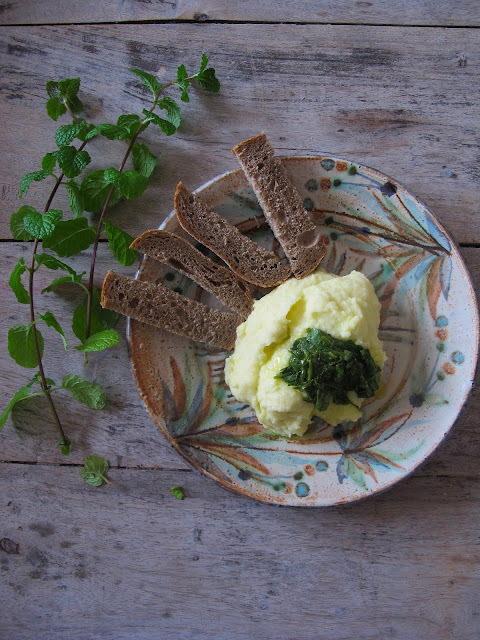 Cyprus potatoes, waxy, red-skinned, firm-fleshed, the Peter Andre of the spud world, are flexible: while I’ve roasted the older ones, the ones in the shops right now are new, great simply boiled in their skins and slick with mint and butter. Cypriot potatoes are one of the best to cook with, coming from the iron rich red soil farms of that divided island. In North london, we are lucky, we have a sizeable Cypriot population, particularly at the fabulous shops in Green Lanes, where we can buy them, but they are also available at Tesco. This recipe, Skordalia, classically Cypriot, sounds rather unglamorous on the page, consisting of cold mashed potatoes used as a dip. It doesn’t sound too appetising does it?

Well you are wrong there, it’s super moreish, my lot couldn’t stop eating the stuff. One day we had it as part of some meze, the next as an accompaniment to roasted salmon. Garnish with fresh mint (one of the most popular herbs in Cypriot cooking) and flat leaf parsley pesto. This is easier if you have a food processor or an electric mixer, it’s got to be as silky as a babies bottom, lumps would ruin it.

500g Cypriot potatoes, peeled and diced
2-3 cloves of garlic (it’s supposed to be very garlicky)
50-100ml olive oil
1 egg
Juice of 1 lemon
1-2 tablespoons of sea salt
To garnish:
Handful of fresh mint, finely chopped
Handful of fresh flat parsley, finely chopped
Handful of walnuts (optional), finely chopped
More olive oil, lemon and salt
Put the potatoes into a pan of salted cold water and bring to the boil.Boil for ten minutes then drain. Crush the garlic in the blades of the food processor or mince beforehand. Add half the potato, and olive oil and process until smooth.
Squeeze the lemon into a jug and dissolve a tablespoon of salt in the lemon juice. Mix the rest of the olive oil and egg into the jug, whisking thoroughly.
Add the rest of the potato and the contents of the jug into the food processor and whip.
Check for seasoning. Leave to cool.
Garnish: mix ingredients and add olive oil, lemon and salt to taste. Use this as a topping for the cooled skordalia.
Eat with bread, pitta or carrot, cucumber or red pepper batons or fried strips of courgette, red pepper and aubergine. Strangely the cold Skordalia goes very well with hot fish such as oven baked salmon or cod.