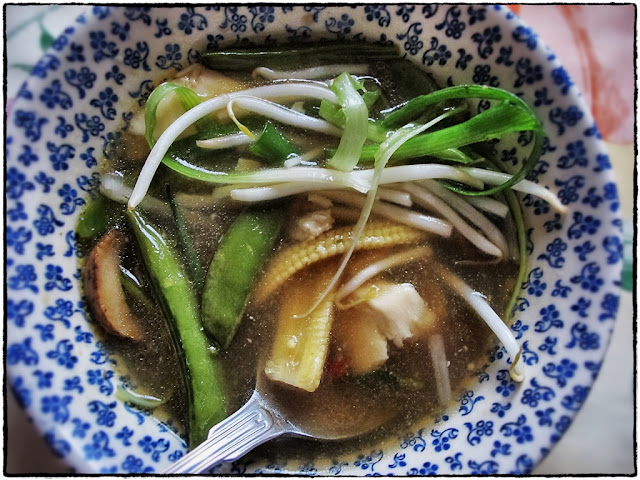 A nod to Chinese New Year on Sunday, my hot and sour soup. Find the recipe here on the Secret Garden Club blog.
This weekend, I also went to the super fashionable Shoryu, a ramen specialist owned by the same guy that runs The Japan Centre opposite, where I had the vegetarian ‘Natural’ ramen. It was ok, not thrilling. It also had a suspicious bit of meat scum in it. Bleurgh. Sorry but meat cooks can’t cook vegetarian. Carnivore chefs cook blandly once you take the meat out. My companion Bellaphon however, who knows his stuff, was very impressed with the tonkotsu ramen made from pork stock.
Lets face it, ramen is pot noodles. I know Shoryu and Bone Daddies make the noodles fresh but it’s strange that people have been sneering at pot noodles for ages (I believe Gwyneth Paltrow said she’d rather die than feed it to her kids) but now it’s trendy. I’ve always liked a pot noodle on occasion. I add stuff to it though, like a squeeze of fresh lime, some soy, some tofu, some spring onions, whatever vaguely Asian thing I’ve got in my fridge.
Bellaphon says if you are going to buy dried ramen in packets, buy Korean. Unlike the rest of Asia, they always eat it dried and their dried noodle technology is the best, producing the ‘bounciest’ noodles. He also says the Japanese stole ramen from the Chinese, but then he says that about everything.
The best two things about Shoryu?
The cabbage leaves dipped in fresh yuzu and soy sauce, which is basically ponzu but fresh so even better. Please Mr Owner, can I have some of your fresh yuzu? Please? You can’t get it anywhere else and you are clearly importing it.
And the lemon grass tea. Just shove a stock or two of lemon grass in a pot of hot water, add a tablespoon or so of sugar and you have the most refreshing, enlivening ’tisane’ you can imagine. Try it. Probably dead good for you as well.