The weather does seem to have a strong effect on what I cook and eat. If it’s grim outside I can have the urge to hucker down and eat comforting stodge or sweet things. On the other hand, especially if there is a little weak sunshine poking hopefully through the clouds, I experience a sudden bolt of impatience and start making summery foods in anticipation of better weather, as if to say ‘hurry up’. If only I could change the weather with my cooking. Perhaps that would be my super power of choice.
This weekend it was walks on the heath, farinata and tabbouleh. Farinata is a gluten-free thick pancake made with gram flour, or chickpea flour. In the South of France, you may know it as ‘Socca’. I first had it in Turin when I attended a pink bloc tactical frivolity protest against Berlusconi. My daughter was being home educated at that time so she was dragged along. We were both part of a political samba band Rhythms of Resistance and we, along with the rest of the London band, travelled to join the Turin branch. Turin, a Northern Italian city, has always been very political, with strong unions and a university that was regularly ‘occupied’ by students. We played at the university, at a march in support of transgender rights and reproductive rights for Italian women, and outside an Italian call centre that was mistreating workers by only giving them daily contracts in order to avoid employment legislation.
It wasn’t all political action though, because, being at heart a bourgeoise gourmande, I managed to include some activities such as tasting the icecreams of several gelaterias, attend a chocolate festival in the centre of town and try the fudgy farinata sold at the local bakery. Which was a useful food stuff as half the London samba band were either coeliac, vegan, freegan or, in the case of my child, just plain fussy. The Italian activists on the other hand, ate everything and anything and were rather perplexed by our multiple special diets. 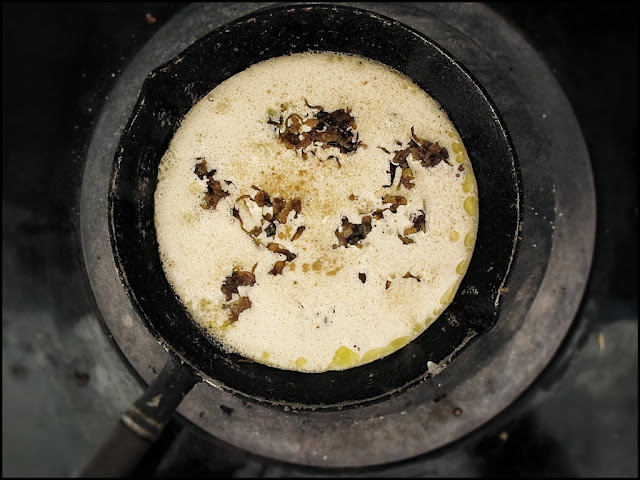 I made the farinata with onions and cumin to give it a slightly middle Eastern vibe. Combined with the tabbouleh, it made for a light and healthy weekend lunch.

Mix the flour and water together and leave for 2 to 12 hours. I left it overnight. Add the cumin and salt.
You will need a frying pan, ideally cast iron, but one with a handle that can go in the oven. Even more ideally, you will have two of these, so that you can make two farinata at once!
On the stove top, add a little olive oil to the pan until it warms up.
Add the gram flour batter until the farinata covers the bottom of the pan and is about 1.5 cms thick (a bit less than an inch).
I then added the caramelised onions.
Once the bottom seems done, that is ‘set’ place the whole frying pan in the oven under the grill. (In the Aga I put it on the top shelf of the roasting oven).
Leave until brown on top and slightly crispy at the edges. You can start on the second one.
This mixture is enough for three farinata but I reserved the last third of the mixture for making onion bhajis.
Making sure you use oven gloves pull out the frying pan and cut it into slices like a pizza. 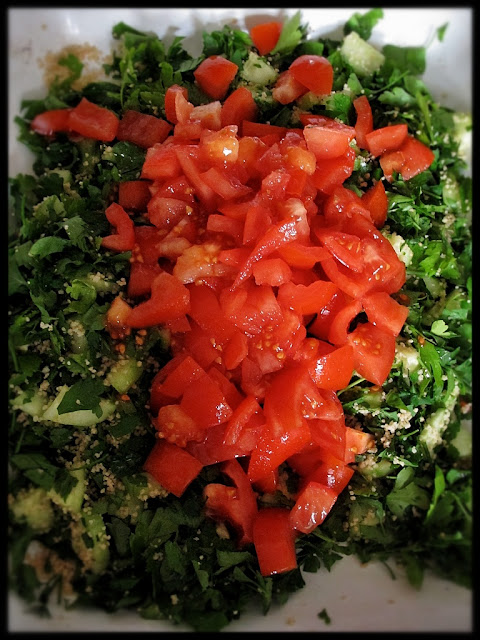 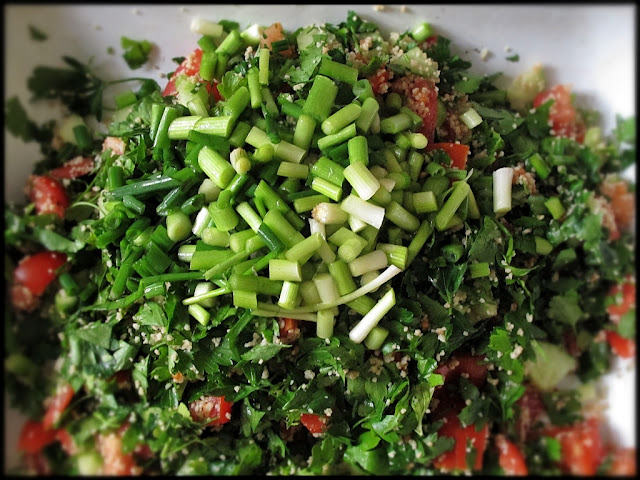 Tabbouleh salad with couscous
Tabbouleh is a refreshing Arabic salad that lots of people get wrong. They think it’s a Bulgar wheat salad when in fact it is a parsley salad. I had the remains of a packet of couscous and a recent delivery of my organic box from Riverford Organics, so as a variation I’ve used couscous (which they tend to use in France) rather than Bulgar wheat.

Refresh the parsley in a sink or bowl of cold water. Throw in a handful of salt and let any grit fall to the bottom. Wash and chop the mint.
Spread the couscous out on a tray and use the method I describe here to plump up the grains. You sprinkle the couscous with salty warm water every 10 to 15 minutes. Do this 3 times. You do not need to steam the couscous as the water in the vegetables will finish hydrating the grain. You don’t need to soak and drain the couscous and my method means that the grain remains fluffy and not waterlogged.
In the meantime prep the cucumber, tomatoes and spring onions. Add them, along with the parsley and mint, to the couscous after the third sprinkling of water. Add the lemon juice, olive oil and salt. 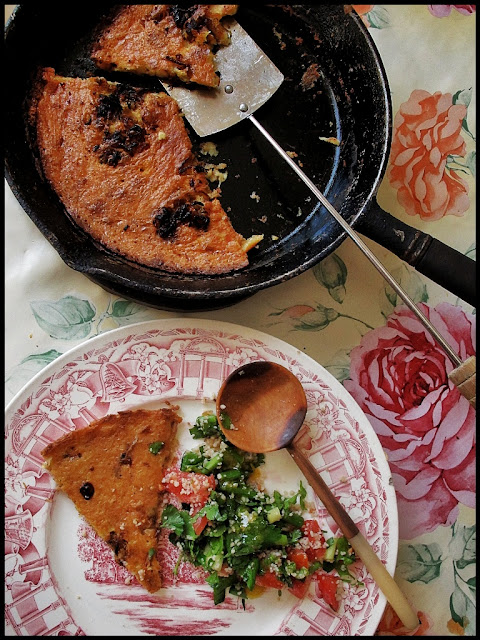 NB: I have many American readers and so am attempting to add cup measurements as well as grams as I realise many Americans don’t use scales. It’s not an exact translation but, except for baking recipes, exactitude isn’t always necessary, I’m just trying to give a visual/volume idea of how much is used. I’m also trying to avoid such silliness as 1/2 a cup plus 2 tablespoons of, say, sugar. Can anyone explain why these irritating measurements are used?