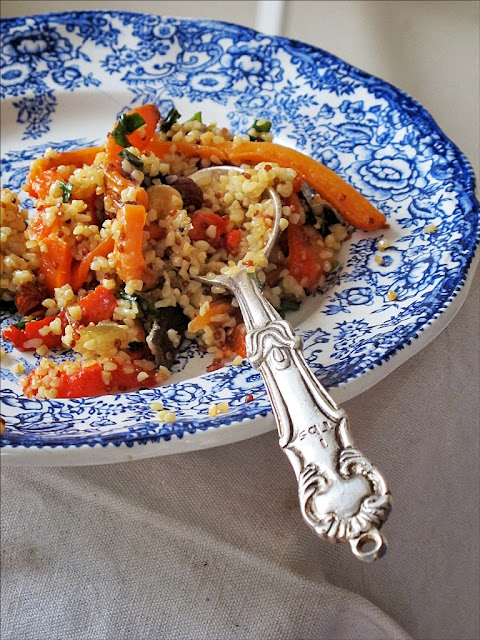 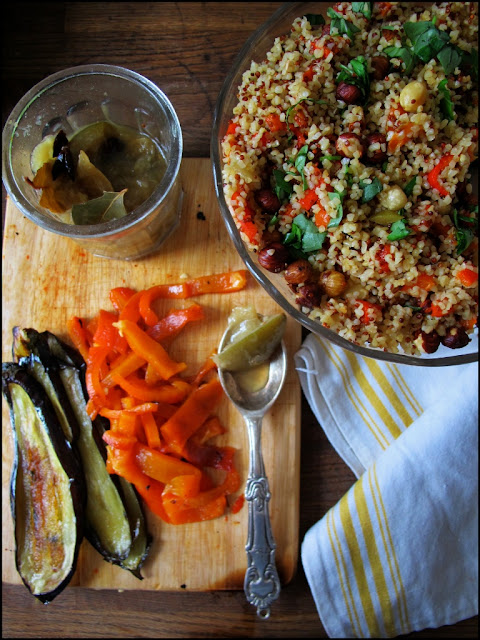 I’m trying to eat different grains. Not just pasta. Quinoa, pronounced ‘keenwa’ (I’m sure y’all knew that but I feel I have to keep repeating it), has recently attracted controversy because anti-vegetarian investigative journalist Joanna Blythman think that evil vegans are pricing out poor Peruvian farmers* from eating their own crop. Why she thinks non-animal eaters are entirely responsible for this I’m not sure. Girl’s got issues (said with a finger snap and a Harlesden accent). Supermarkets are now doing mixes of bulgar wheat and quinoa which make a change from the usual. Quinoa comes in several colours from white, pink, brown, black and red. The mix I used had red quinoa which is nuttier and perhaps more flavoursome than the white, which is more commonly found on grocery shelves. Quinoa isn’t a grain but a grass that contains healthy fat and proteins, but tricks the appetite into thinking you’ve had a nice bowl of starch.
This recipe would make a complete meal if accompanied by a few slices of grilled halloumi. Just spent the afternoon chatting with a friend who is doing a cooking course at Leiths. I’d love to do a cooking qualification but unfortunately the majority of the course is dedicated to learning about meat; it’s butchery and cooking. Why? Why are organisations like Leiths still drumming home the message that a meal without meat isn’t a meal? This isn’t sustainable, this isn’t healthy and it’s a very dated attitude to food. Cooking schools and catering colleges need to be at the forefront of teaching and influencing future chefs that there is more to food than meat.

Try this instead, it’s not ‘cheffy’ but it is gorgeous tasting.
Bulgar wheat/Red Quinoa salad with hazelnuts and roast vegetables recipe


A dozen carrots, sliced lengthways into quarters and roasted with some oil
250g (2 cups) of quinoa and bulgar wheat, cooked in salty boiling water
1 aubergine, sliced lengthways and roasted in olive oil, sliced into strips
1 large red pepper, roasted, deseeded and finely sliced
75g hazelnuts, toasted
1 preserved lemon or lime, finely diced. (Do make these, I chop them into everything.)
A handful of fresh basil leaves, rolled and cut into fine slices (a chiffonade).
Olive oil
Salt

Preheat your oven for 15 minutes at 200º C. (Aga instructions: the vegetables can be roasted on the top shelf of the hottest oven.)
Prep the carrots, topping and tailing them, peeling and put them on an oven tray to be roasted. I covered them with some porcini oil but olive oil is fine too.
Add the pack of bulgar wheat/quinoa into a saucepan of boiling salted water and cook for ten minutes. Drain.
Prep the aubergine and pepper and roast.
Toast the hazelnuts in a dry frying pan for five minutes to release the oils.
Mix all the ingredients together, adding the preserved lemon or lime, the basil, the olive oil and the salt. 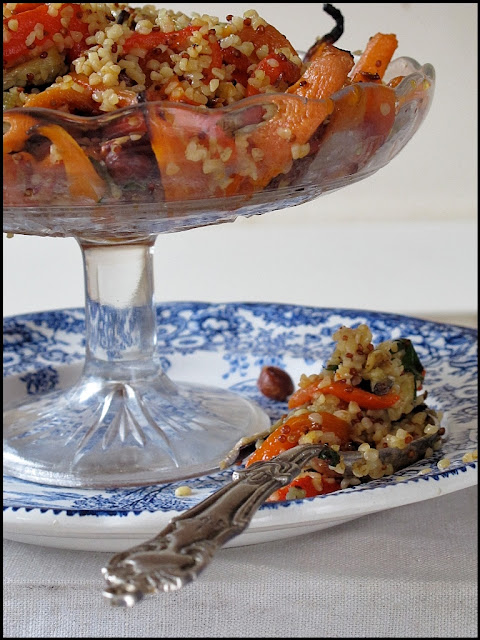 *I spent five months in Peru and Bolivia, mostly with Quechua speaking villagers, and I didn’t once have quinoa. We ate potatoes, rice and ‘fideos’ (macaroni). This was quite some time ago, in the early 90s so maybe it wasn’t popular then so it seems strange to claim that Andean dwellers have a desperate daily shortage of quinoa.

Previous Post: « Weekend lunch: Recipes for farinata and tabbouleh
Next Post: It’s a wrap menu and recipe for home-made ‘After Ates’ mints »