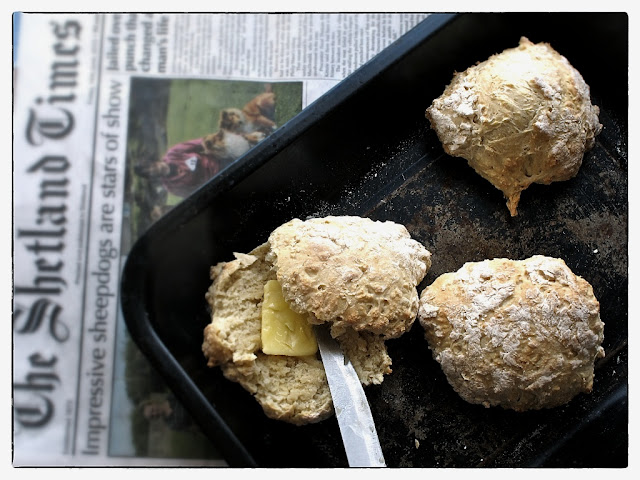 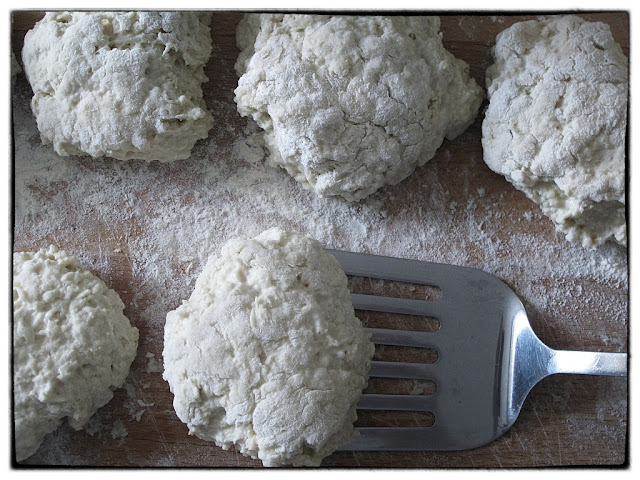 During the prime of Miss Margaret B. Stout, on her graduation from the Edinburgh School of Cookery in 1915,  she fed Scottish troops returning from World War One. Once the war was over, she returned to the Shetland Isles, determined to collect and record the simple but plain recipes using local ingredients, passed down from mother to daughter.
Bemoaning the use of ‘tinned meats’ by modern housewives, “change, although inevitable, is to be regretted, for there is no doubt that a hardy race (the Shetlanders) with good teeth, muscle and bone, thrived upon the food used langsyne*” Miss Stout wrote ‘Cookery for Northern Wives’, from which I got my recipe for bannocks, a typical scone style bread from the Shetlands.
Making bannocks with buttermilk reminded me of my recent trip to Denmark (soon to be blogged) where grown men commonly drink glasses of milk with their dinner, I saw this too in the Shetlands. Danes also have chilled buttermilk as a refreshing summer drink, seen in Shetland cookery as ‘Blaand’: “This is a refreshing drink made by pouring enough hot water onto buttermilk to make it separate; the curd is drained, pressed and served as Kirnmilk. The whey is allowed to stand until it reaches the fermenting, sparkling stage”. (A similar drink is found in Persian cuisine)
Shetland was part of Norway and Denmark (which used to be one kingdom) for centuries, and only became Scottish in the 15th century. In fact, Denmark still has rights to Shetland, having merely pawned the islands. If Scotland becomes independent next year, it will be interesting to see what happens in terms of independence for Shetland, for much of Scotland’s oil wealth is based around the isles. Shetland traditionally has been Unionist.
Visiting Shetland in June means that I got to experience the ‘simmer dim’, the sun shining at midnight. I have to say though, I did not sleep well in the disorientating brightness. I kept waking, looking out the window at 2 am, seeing that it was sunny and having difficulty going back to sleep. In the winter, the Shetlands only have a little daylight, between 11 am and 2.30pm. It’s dark by 3pm. But winter is the time to see the Northern Lights.
Things have changed so rapidly on the Shetland Isles over the last century: photos show women wearing entirely woollen outfits, with rough skirts, in the 1920s. My taxi driver, whose family came from the Southern part of the island, said a trip to Lerwick, the main town in the centre, for his grandparents, was a twice yearly thing, taking all day by boat. Nowadays you can drive it in 25 minutes.
The advice in Northern Cookery for wives is delightful: “On Beainer Sunday (Sunday before Christmas) it was usual to hang up an ox head in the chimney to make broth with”. The book includes mysterious recipes such as ‘Krappin Muggies’, ‘Sparls’, ‘Vivda’, ‘Tar-Tin_Purrie’, ‘Virpa’. With very few ingredients, the Shetland wives managed to make an ingenious amount of dishes.

Recipe for Bannocks:
I made two types:  ‘top’ bannocks, as a lady I met in the supermarket called them, cooked on a griddle, (probably even better on a peat fire) and, presumably, ‘bottom’ bannocks, baked in the oven. Roll them out a bit thinner if you are doing it on the griddle or in a dry frying pan, otherwise they can remain uncooked in the middle.
Eat,  spread generously with butter, perhaps with a boiled kipper and serve with a glass of cold buttermilk.

“Mix the dry ingredients together, make into a soft dough with the buttermilk, just as soft as can be easily handled. Turn onto a floured board” and form patties. I liked them to look quite rough and not too smooth.  Cook them either on a dry griddle or frying pan, on a low heat, until risen and golden on the outside. Or bake them in the oven, 180ºC, on a baking tray, for about 15 minutes. (Baking oven of the Aga). 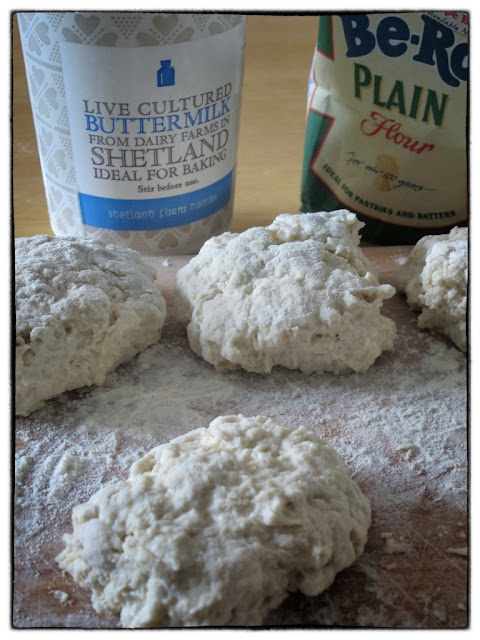 *langsyne= long since, long ago in Middle English

Previous Post: « How to eat mussels: tips and recipes
Next Post: Ten great places to eat in Copenhagen »