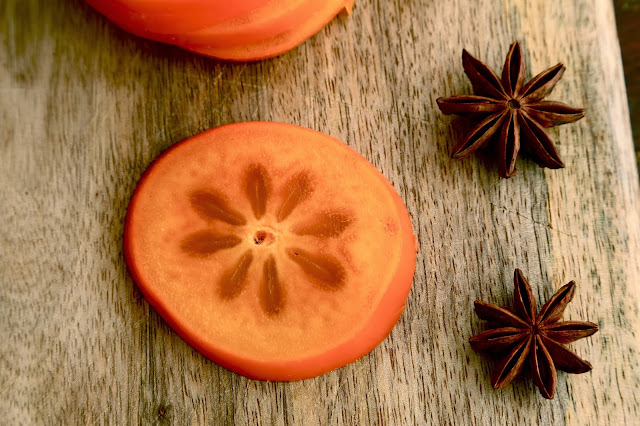 I got sent a box of Spanish Persimmon of the Hachiya type recently. In Israel they are called Sharon fruit but Persimmon sounds far more exotic and romantic, stemming from an American Native Indian word. As girl’s names go, I prefer Persimmon to Sharon. They are very pretty fruit with an intensely sweet soft flesh. Technically they are a berry. You must wait until they are ripe to eat them otherwise they could cause a bezoar, a kind of woody hard mass in your stomach, if you eat too many regularly. One of the remedies for this is drinking lots of Cocoa cola which shrinks them.
I had a good old play: 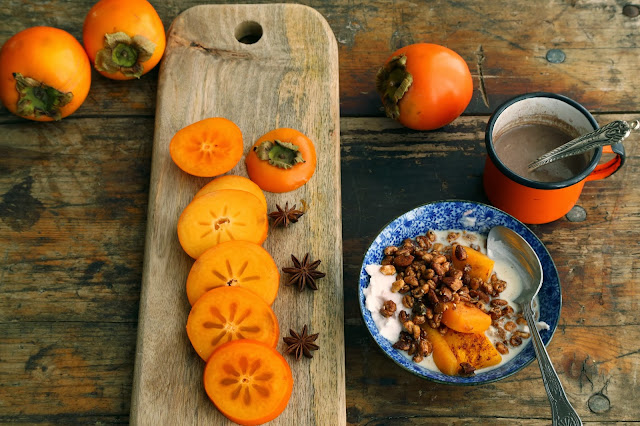 Lazy arse breakfast muesli with warm persimmon.
It is a rule that making your own muesli is always going to be better than shop-bought. But sometimes I cannot even be bothered to properly make muesli. So I just eat the ingredients raw! Still tastes good.

1 Persimmon, cooked in spices such as star anise, grated nutmeg, ground cloves with
a drool of honey
A scoop of porridge oats
A handful of nuts
A glug of Milk
a dollop of Yoghurt
a pinch of ground cinnamon

Cut up the persimmon into chunks. Place in a saucepan with a star anise, a few scrapings of nutmeg, a pinch of ground cloves and a tablespoon of honey. Simmer until warm.
Take a bowl and scoop in your cereal stuff, whatever you’ve got around, porridge oats, ends of cereals such as rice crispies, cornflakes, all bran.
Add any nuts you like, almonds and hazelnuts are great.
Pour in some milk, a dollop of yoghurt.
Add the warm Persimmon.
Sprinkle some ground cinnamon. 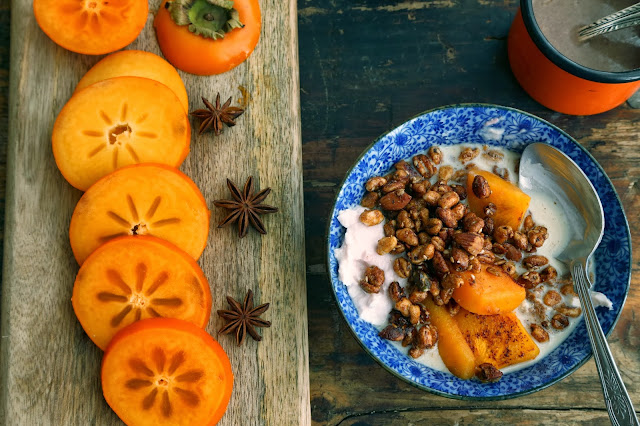 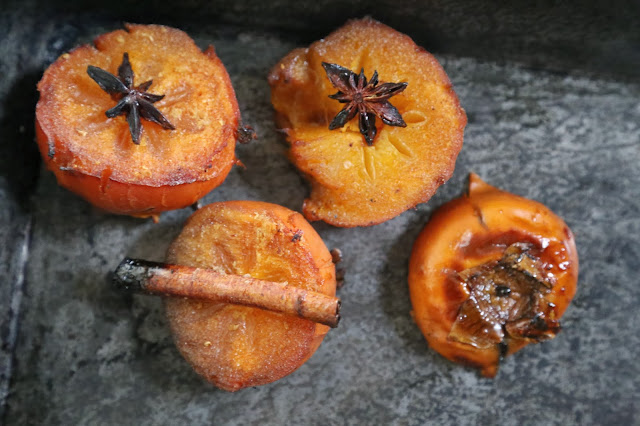 Roast Persimmons with coconut tapioca pudding
Tapioca is a love or hate food, probably because of school dinners. It is a starch. It just says that on the packet. It isn’t a form of pasta, like semolina, but from the cassava root. It has virtually no nutritional value whatsoever. I like the pearl like texture of tapioca pudding but you may not.
To make the tapioca:
400ml of boiling water
300g of tapioca pearls
1 can (400ml) of coconut milk
100g of caster sugar
a pinch of salt
To roast the persimmons:
100g of palm sugar
100ml of boiling water
4 persimmons cut in half
3 star anise
a thumb of ginger, grated finely
a stick of cinnamon
Tapioca method:
Put the water into a saucepan and bring to a boil. (Actually I always use an electric kettle to boil water). Then add the tapioca pearls. Cook for five minutes, constantly stirring, then add the can of coconut milk, the sugar and the salt. Cook on a low heat for another ten minutes. Keep stirring, it sticks easily. When the pearls are translucent, they are cooked.
Persimmons:
Put the palm sugar and water in a saucepan, heating until the sugar melts, to make a 1:1 syrup
Cut the persimmons in half or in slices and place in a baking tin. Add the star anise, ginger, cinnamon . Add the syrup and roast in a hot oven for ten to fifteen minutes.
To serve:
With the tapioca still warm, or it can be served cold, portion it out into glasses, cups or small bowls, adding half a persimmon or a slice on top of the tapioca. You can add some more shavings of palm sugar on top. 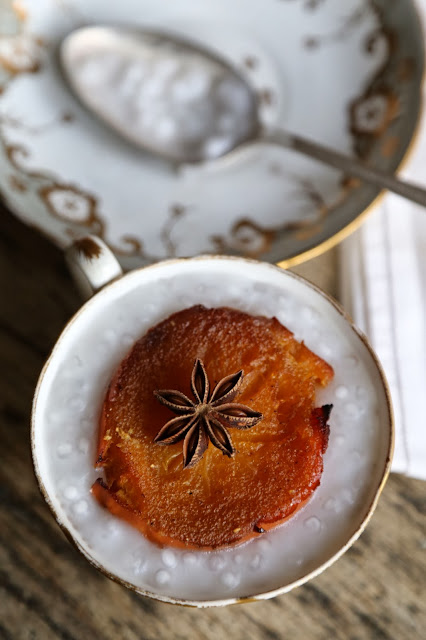 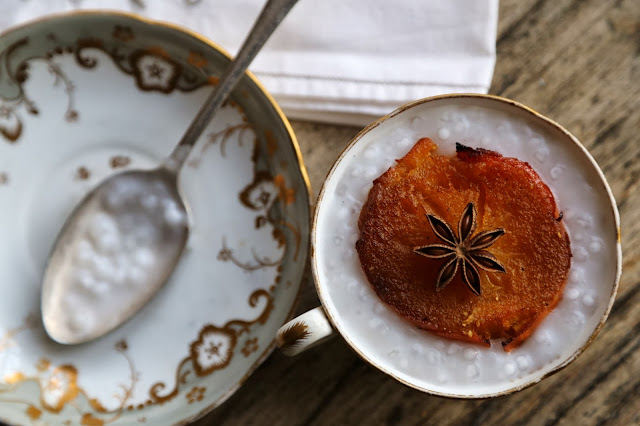