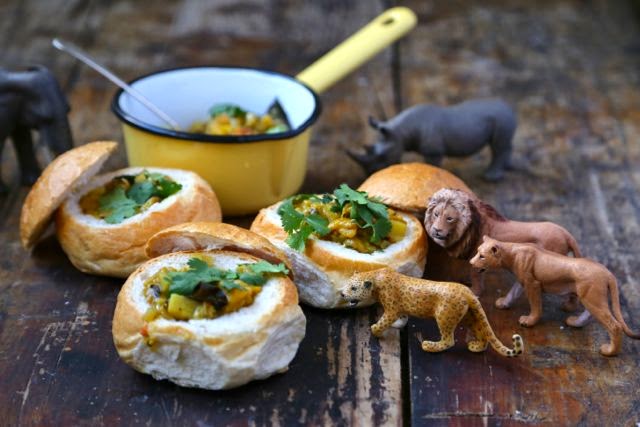 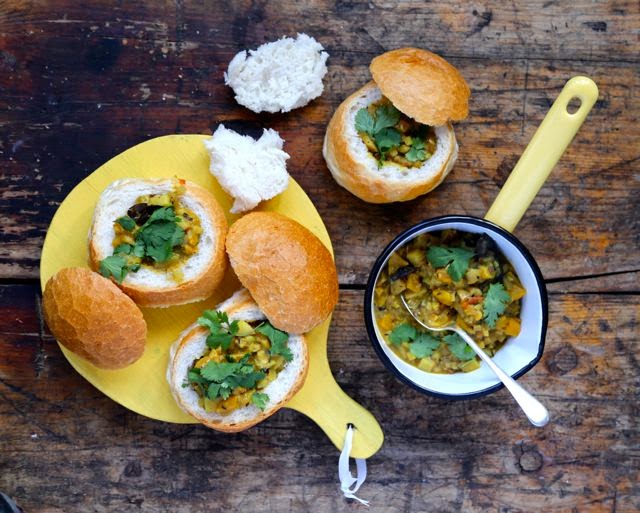 Bunny chow is a South African street food, part of its ‘rainbow cuisine’, with influences from indigenous tribal cooking, Malaysian, British, Afrikaans/Dutch and Indian food. It is similar to the trenchers that medieval Britons used, prior to the generalised use of cutlery, which was a stale hollowed-out loaf, a carrier for the food. The advantage being that, once the sauce has softened the bread, you can supplement the dish by tearing off and eating some of the trencher.
Bunny chow originates from Durban, where there is a large Indian population, so is filled with a curry. I served mini bunny chows at my South African stone fruit supper club last week. One of the guests, Cooksister, a London-based South African food blogger (one of the longest running blogs), expressed surprise at the fact that the curry was vegetarian, but, in fact according to wikipedia, the original bunny chows were vegetarian. Today bunny chows are mutton, beef or beans. You’d think they’d have rabbit stew wouldn’t you?
A street food company is now selling Bunny Chow in the UK, and it may well take off. It’s a bit like a curry sandwich, very moreish and a great lunch option.
The piece of bread that remains from the hollowing out process is referred to as a ‘virgin’. It’s not done to nick someone else’s virgin. According to this site, most bunnies are made from the ends of a quarter loaf of bread, but ones that are made from the middle of the loaf, without a crust at the bottom, are called ‘funny bunnies’.
I used peaches to make the curry which may sound strange but fruit curries taste better than they sound, one of my favourite curries is Camilla Panjabi’s fruit and nut curry. There is an element of chutney about a fruit curry, which is no bad thing.

Here is the recipe for Peach Curry Bunny Chow
Serves 4

Go to the shop and buy the ingredients including the rolls. You can use fairly crappy Greggs style rolls for this.
Come home, have cup of tea, put radio on. Persuade self that you have an exciting life and that you’d rather make this and that the lack of sex, drugs or rock n roll is just fine.
Prep the peaches by blanching them: cut a cross on the top and plunge into boiling water for a minute. Take off skins and take out stone. Prep the rest of the veg.
Get a medium saucepan and melt the coconut oil in it on a medium heat. First sling in the mustard seeds, hear them pop. Add the rest of the spices: cinnamon stick, bay leaf, cardamom, clove, cumin, cordiander seeds. The secret to a good curry is a mix of whole and ground spices. Here you are tempering them, i.e. frying them a bit before you put the rest of the ingredients in. Only fry slightly, you don’t want everything to taste bitter.
Put in the onions, garlic, ginger, chilli, creamed coconut, turmeric.
Add the small red potatoes, cook for ten minutes. Add the tomatoes and red pepper. Add the peaches. Add the sultanas. Add salt.
Keep stirring.
Taste. Maybe add more salt.
Gut your rolls. Scoop the curry inside, scatter fresh coriander and squeeze lime over. Put the cap back on. Eat while looking outside the window at the rain and think of Africa. 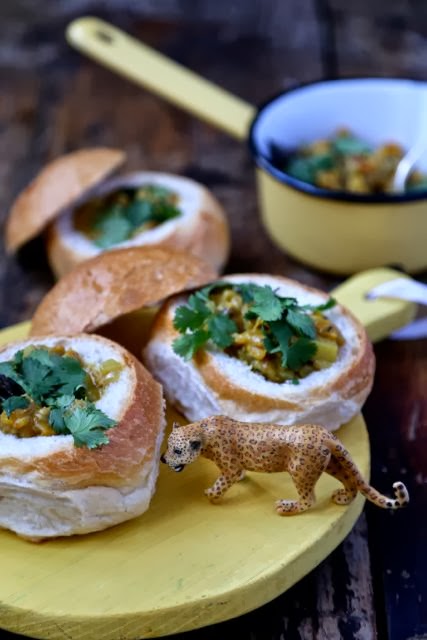