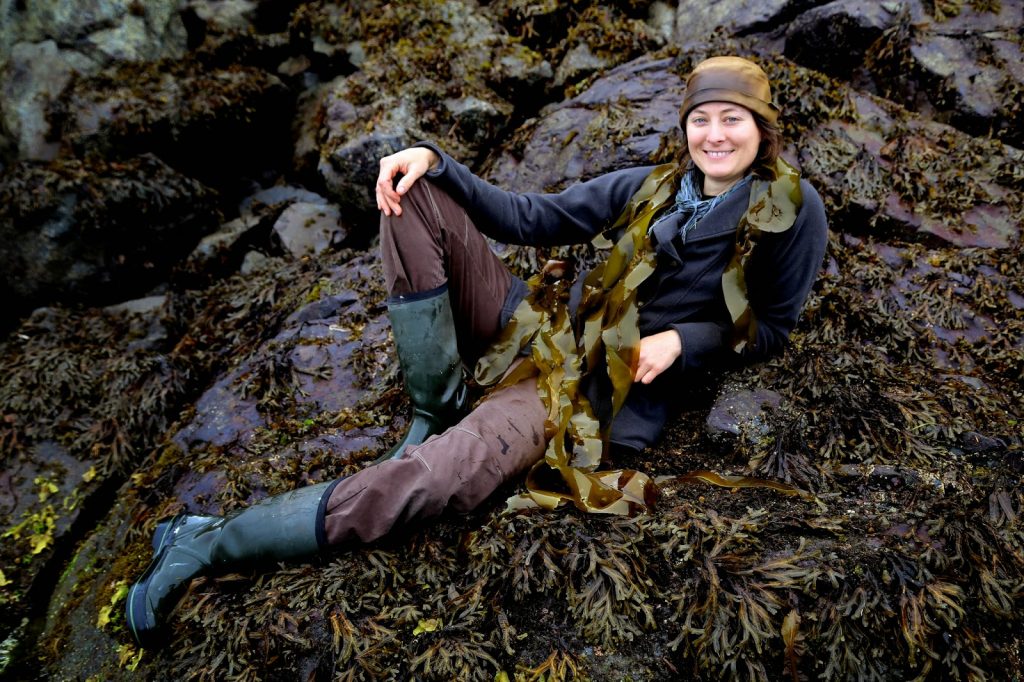 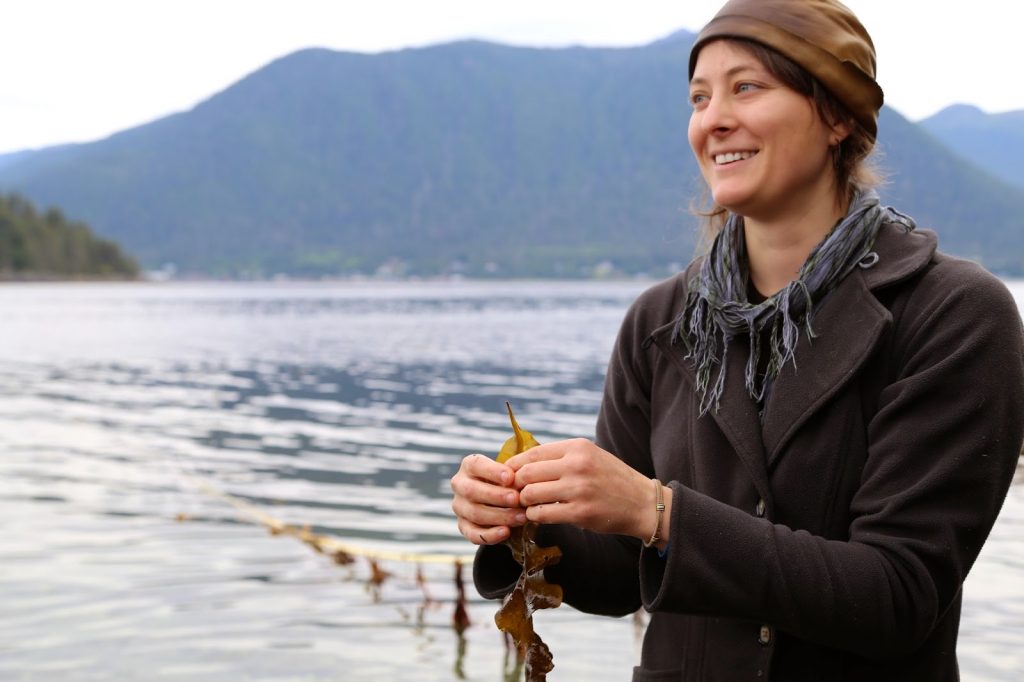 “When the tide is out, the table is set”

Lithe and graceful, clothed in algae colours with eyes the hue of sea water, Hope Merritt lives in Sitka, off the coast of Alaska, part of a chain of islands. Prior to moving there, she was a traveller, living hand to mouth. ‘Eating the way I do is health insurance for me’, she says as she wanders along the shore line, pointing out beach greens. For six years now she has been running Gimbel Botanicals, selling dried, pickled and fresh seaweeds.  The former she dries in a dehydrator as there isn’t enough sun in Sitka to air-dry them. As a beach forager, she knows intimately the tides and the moon cycle that controls them. 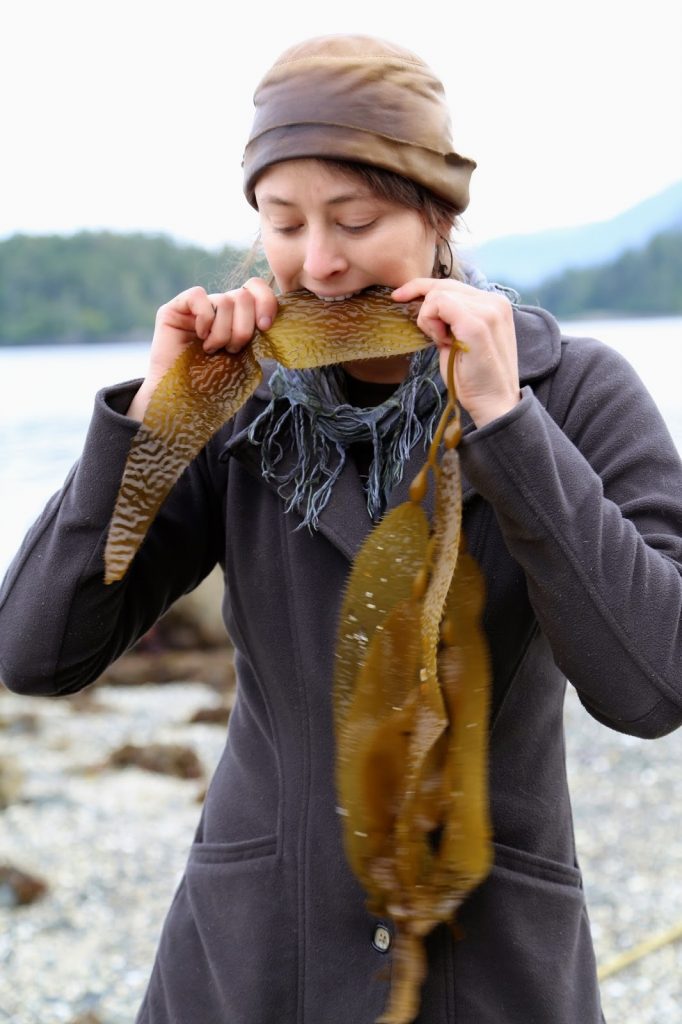 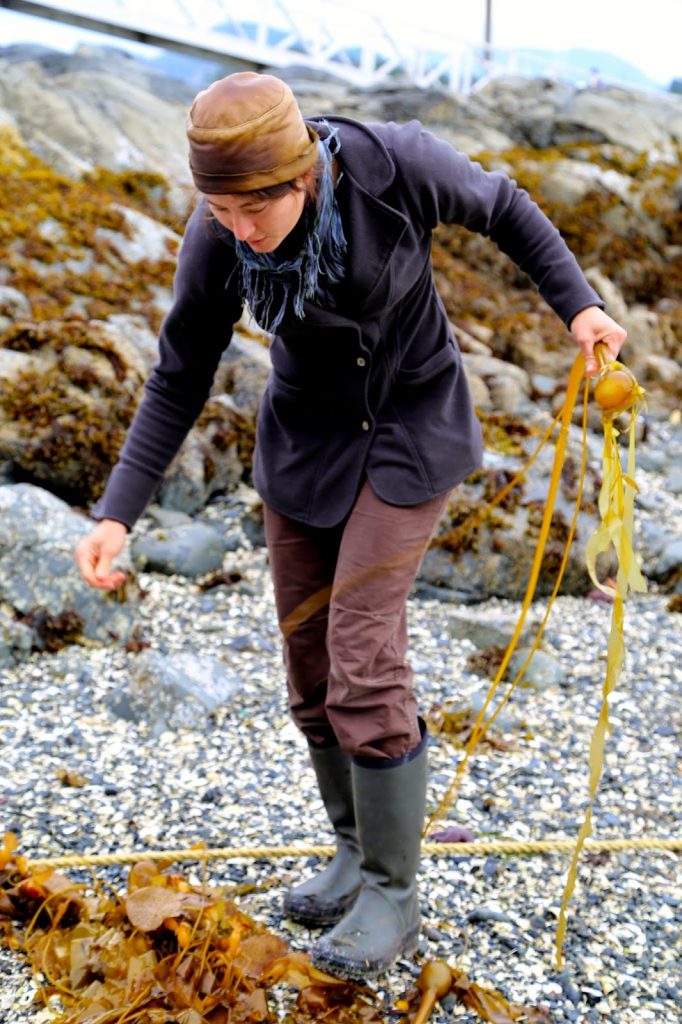 a red algae, is a beautiful purple colour and contains iron, iodine, calcium and bosphorus. It is lovely dried and sprinkled as a seasoning. You can also eat this fresh off the rocks.

is another red algae, again a dark purple but turns green when boiled. It comes in long strips and is similar to nori in Japanese cuisine. It is also used in Laverbread in Welsh cuisine. The green version is known as sea lettuce. 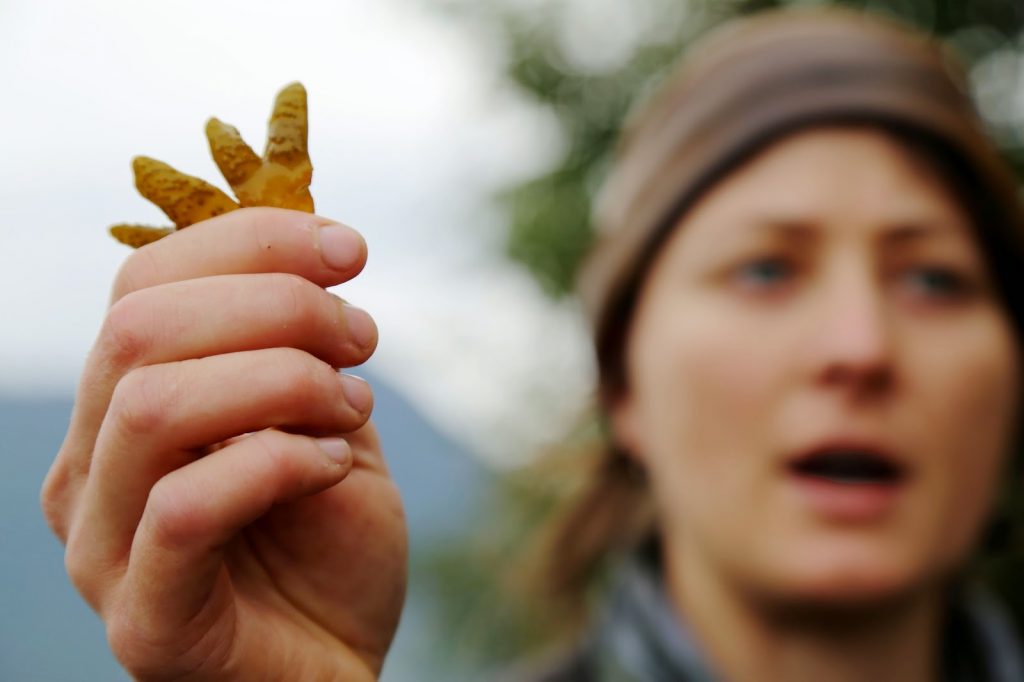 is a brown algae. The ‘holdfast’ attaches itself to rocks. On the ends of the algae, there are bladders, and the fuller they are the more mature. The bladders are slimy inside. This has medicinal qualities; particularly for high blood pressure and under-active thyroids, to the point that it is contra-indicated for people with over-active thyroids.
To harvest this, forage in spring time, cut close to the base and look for really full bladders. It is high in iodine, Vitamins A and  C and helps with weight loss. Hope sells this in packets as a delicious snack. 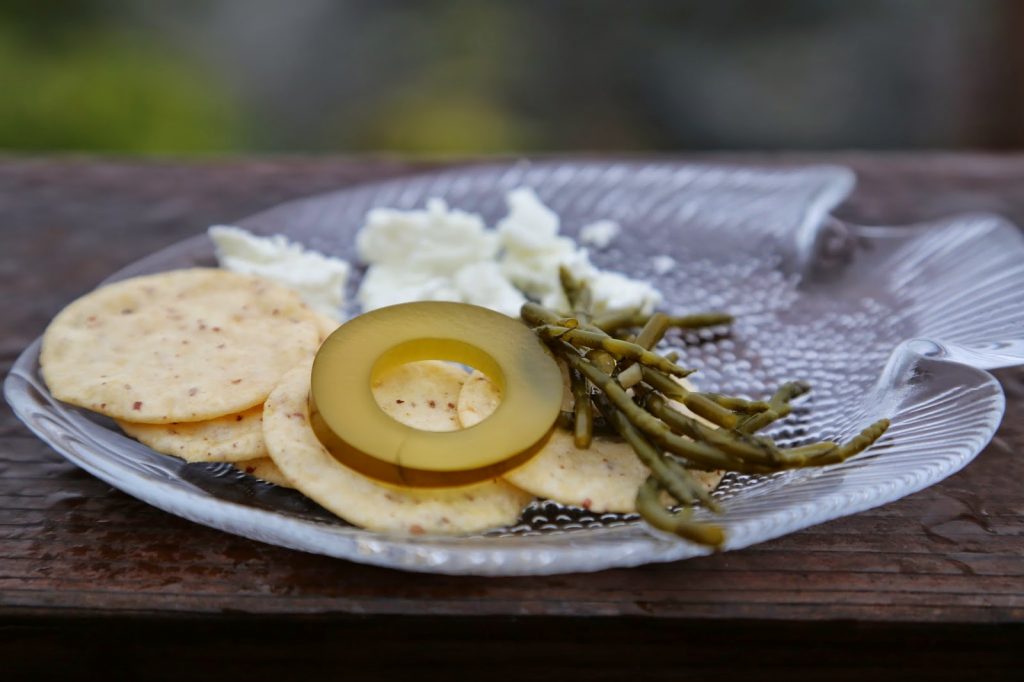 This succulent plant is actually part of the beet family. It’s now regarded as a superfood, containing prodigious amounts of folic acid and acting as an anti-cholesterol. The name glasswort derives from the fact that the burnt ashes of this plant were used in glass making.
Hope sells this as a pickle. 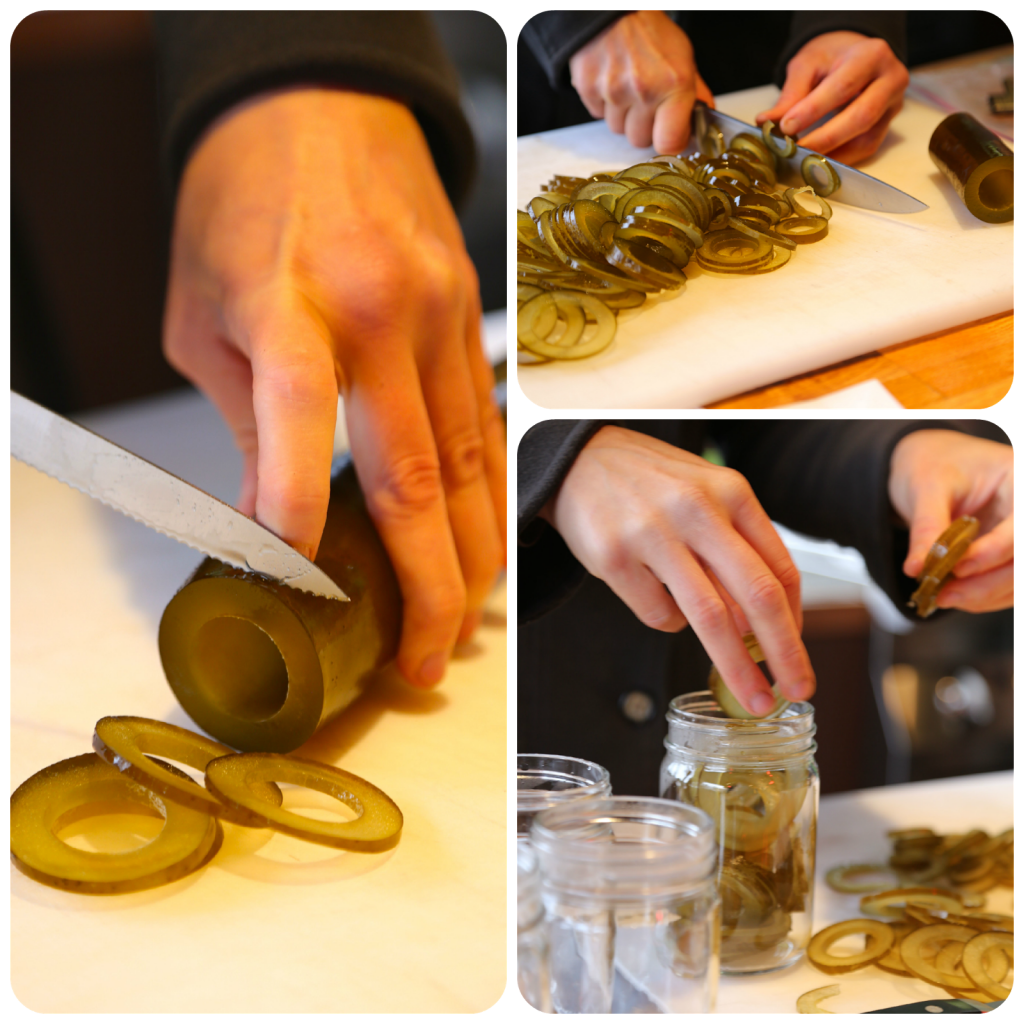 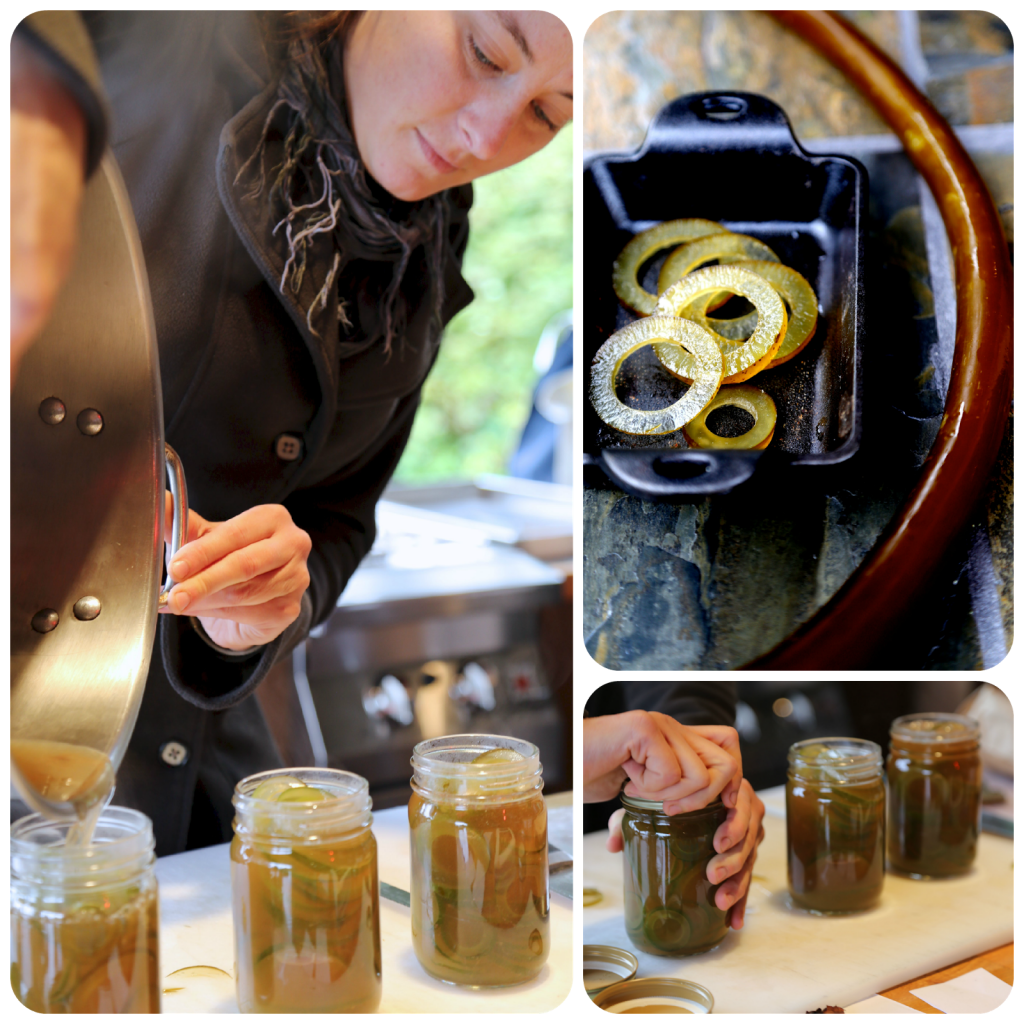 This tubular algae with wide fronds on the end, like a tassel, was a revelation. An aid to dealing with the side effects of  chemotherapy, this kelp needs acidity to taste at its best. Pickled, it worked as a dill pickle cucumber, with similar crunchiness. I could imagine it on a toasted bagel with cream cheese and smoked salmon.
Hope makes this with a 50/50 brine, that is, 50% water, 50% vinegar. She tends to use apple cider vinegar and also adds honey and pickling spices.
She first sterilises the jars and lids.
Then she boils the brine to 160F (70C) and hot packs the sliced bull kelp into the jars.
Other uses for this kelp include stuffing the stipe and steaming or roasting it. 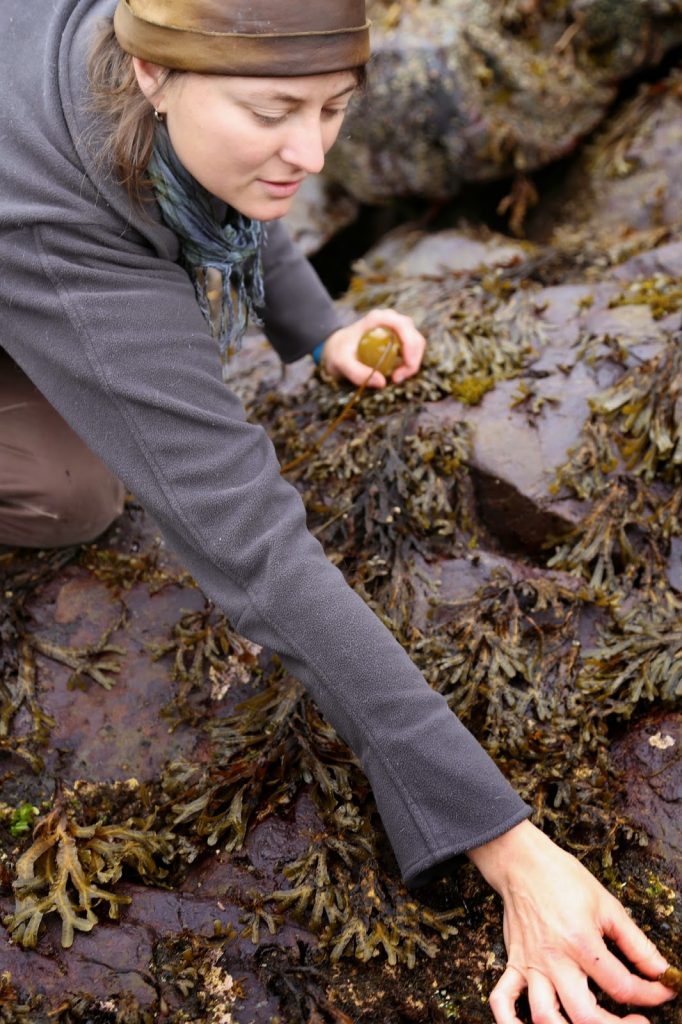 Other tips for beach and seaweed foraging:

Other resources for information on seaweed:
Fi Bird’s book on coastal foraging: The Foragers Kitchen