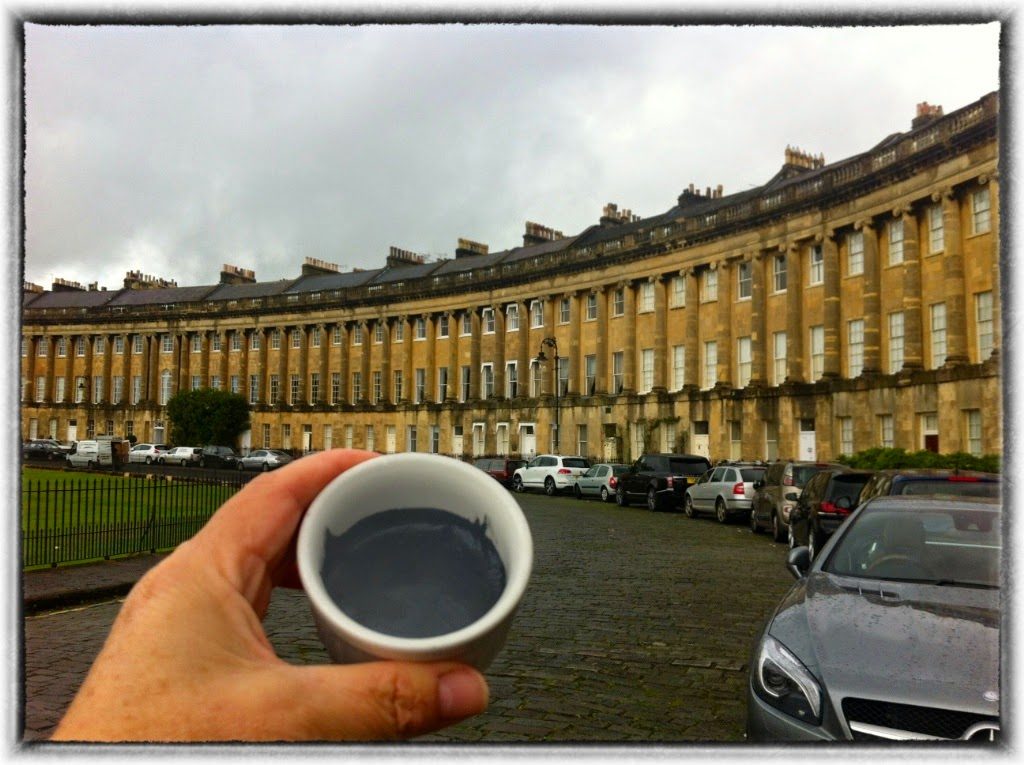 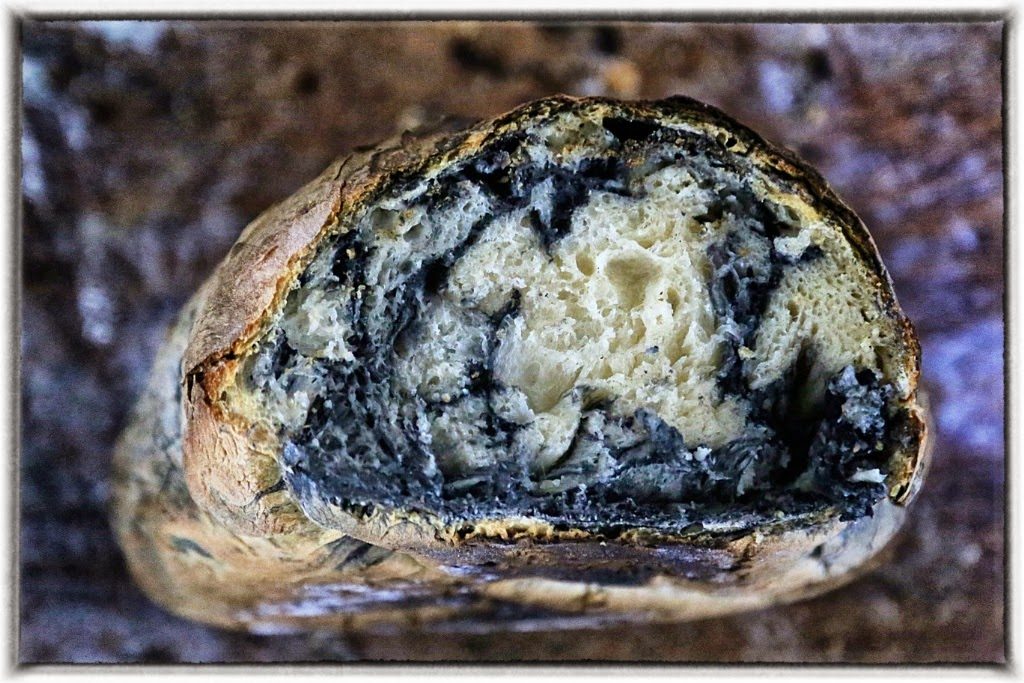 In the basement room of his cooking school in Bath, Richard Bertinet flexes his large shoulders as he lifts up the dough with dusty hands that are like shovels. Flour is billowing everywhere and I hear the slap of the dough as it hits the counter. “frasage, decoupage, montage au bout, decoupage, soufflage, patonnage, couchage, etirage, buchage ” he says “these are the stages, this is how bread was always made.” 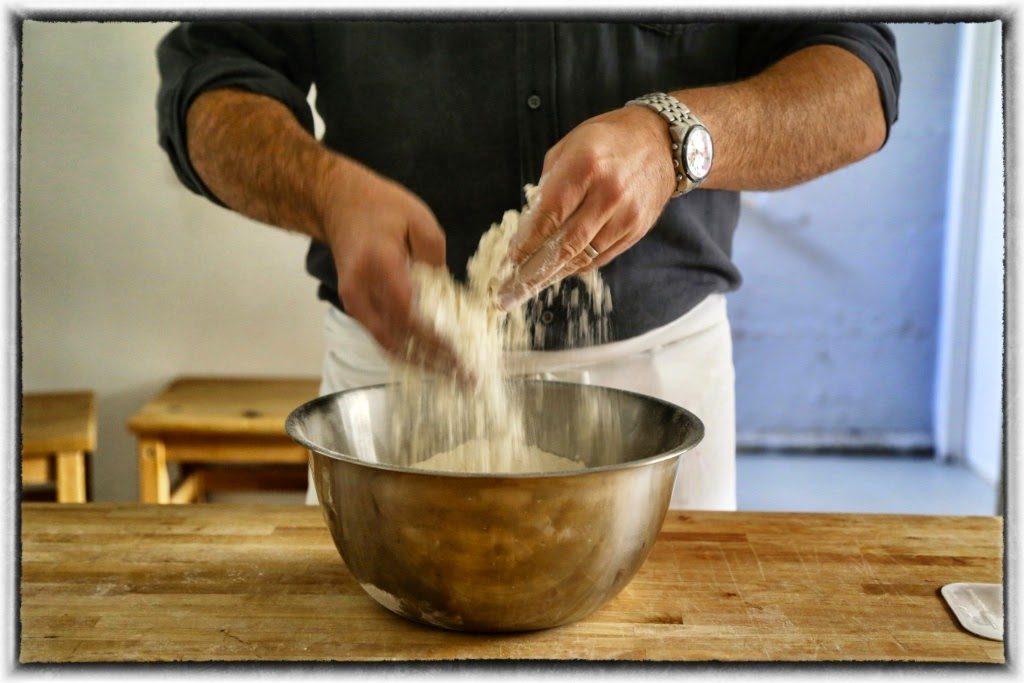 Built like a labourer, Richard Bertinet has been baking bread for 25 years. He came to England at the age of 22, “to meet a girl”. He stayed two weeks, liked it, and ran out of money. It was time to get a job.  He got his first job from Robin Hutson, starting at the Chewton Glen hotel in the New Forest where he worked in the pastry section. There Richard perfected the techniques he’d learnt during his apprenticeship in France. By 2000 Bertinet had his own consultancy. Now he has a world famous cookery school and two branches of the bakery in Bath, and he’s on his fourth book.
When I dropped in, armed with a ramekin of squid ink, Richard had just come back from the Cake and Bake show. “Of course they aren’t interested in me, the audience wants to meet bakers from the TV.” he said with a laugh.
Is it not insane that cooking gameshow (Masterchef, Great British Bake Off) contestants are more popular, more sought after than serious baking teachers like Richard? 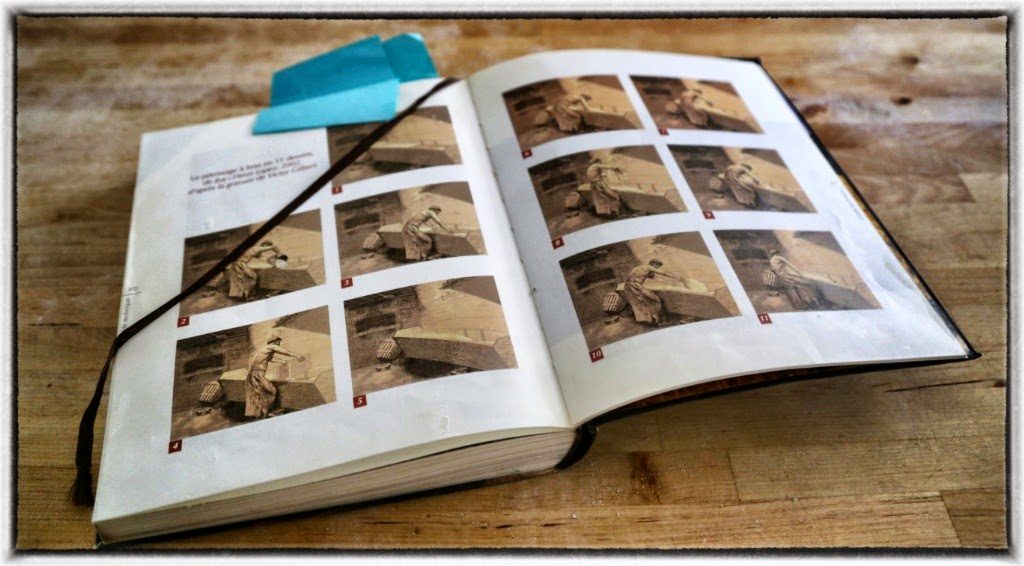 Bertinet talks as he folds the dough, pointing with a large floury index to a book,  Le guide de l’amateur de pain by Poilane, who died in 2002. “I was fortunate to know Poilane before he died.” murmured Richard. He gives me a running commentary on the history of bread making while he works… “From 1700 to late 1800 bread was made at home. The housewife would make it, using a housewives technique and it was taken to the bakers to be baked. In Marrakesh, it’s still done that way. As the population grew it became impractical to bake in bulk in this way, it became a man’s job.

“Bread used to be heavy, it was all about filling you up. The technique changed, more water, more air. With lighter bread, it became more digestible.”

At the Bertinet cookery school, people fly in from all over the world to learn his techniques. There is a Rodin-esque sculptural beauty to watching Richard work, and his French accent reminiscent of Depardieu is a poetic rap interspersing the rhythm of his labours…

“You have to talk to the dough. Breathe it. Live it. Todays flours are improving all the time, even from ten years ago. Now very strong flour has 14.5% protein.” He uses Shipton Mill, Waitrose, Matthews. 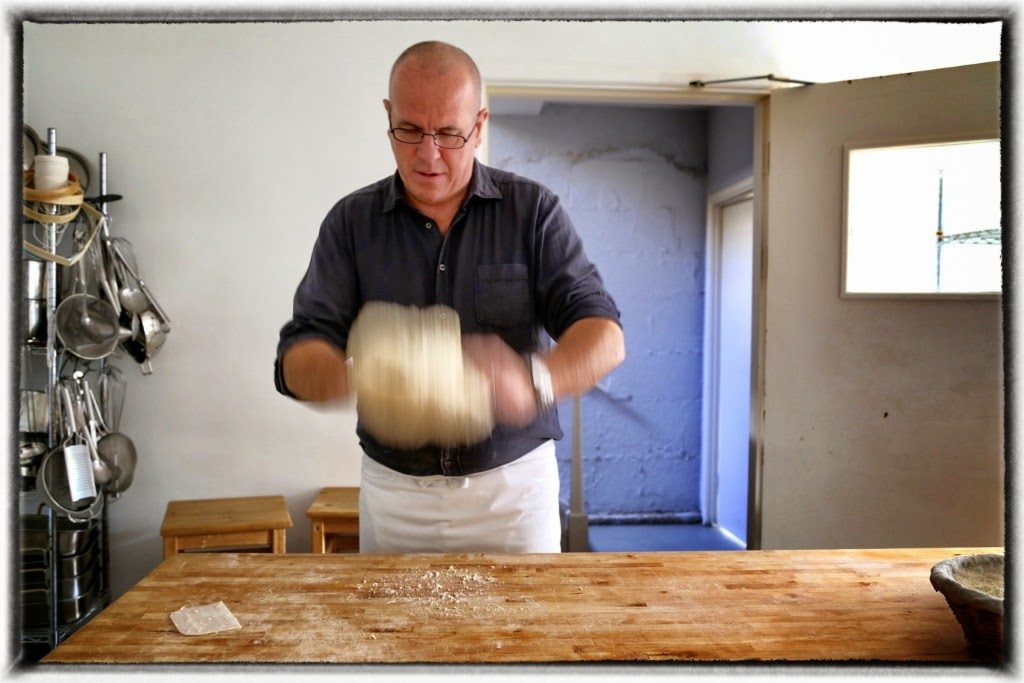 I mention the trend towards sourdough..”If you don’t understand how to make dough properly, forget sourdough. It’s so frustrating… when you make pottery, do you make fine bone pottery on day one? No. Of course not.”

Is being French an advantage or a disadvantage do you think?

“An advantage in Britain. Nobody knows what class you are.” Which is an indictment of British society really, we are still ranked as soon as we open our mouths. 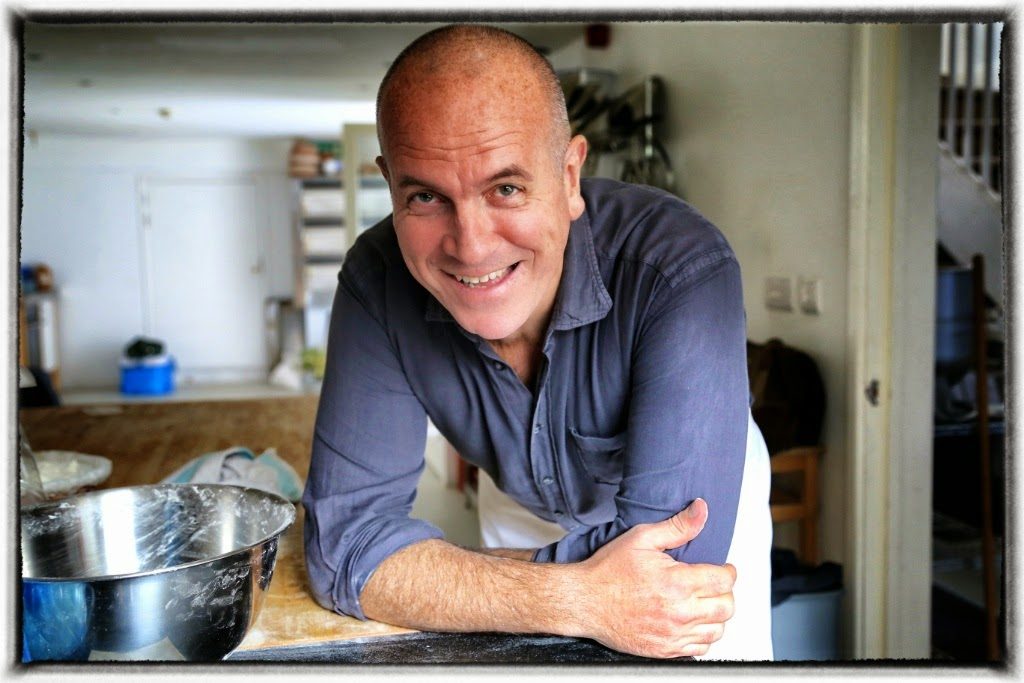 Richard takes my pot of squid ink and adds it to the dough, grimacing as he spreads it criss cross with a plastic spatula, into the folds. The next day I will turn up the Aga to full heat and bake this marbled dough on the floor of my roasting oven. I was originally inspired by the black baguette of Gontran Cherrier in Paris and so, chatting to the friendly restaurant manager at the Allium Brasserie, I asked where I could buy squid ink in Bath. I planned to do a bread experiment with Richard Bertinet the next day, I explained. I’ll ask my husband, she said, he works as a sous chef at the Royal Crescent hotel. 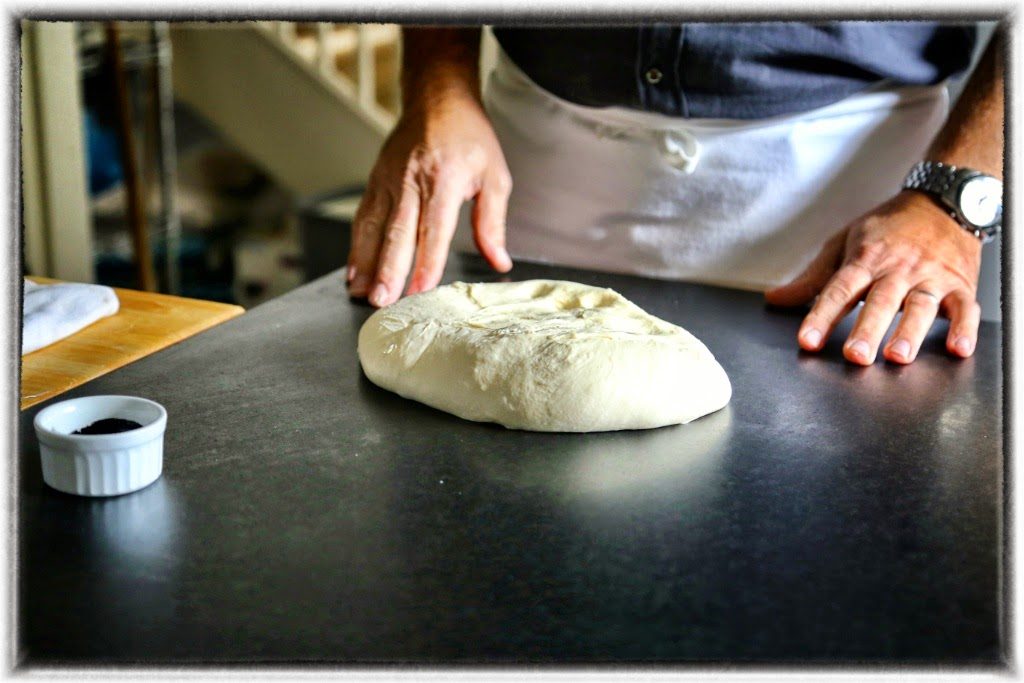 The next day I took a taxi (I had to take taxis everywhere as I was carrying a heavy two tiered wedding cake and it was raining. It was all very MacArthur Park) to the Royal Crescent which is, of course, one of the things you just have to see in Bath. It is a beautiful crescent of Georgian houses. The Royal Crescent hotel is bang in the middle of this majestic sweep, all stairwells, crystal chandeliers, formal gardens, marbled floors, and leather sofas. There were lots of young subservient footmen in uniform, a bit like Thomas the gay one in Downton (who I fancy despite the fact he is evil.) Anyway, her hubbie, the sous-chef, came up from a basement holding a small white china ramekin of black squid ink then I sped on my way to Richard Bertinet’s cookery school in another Georgian back alley. 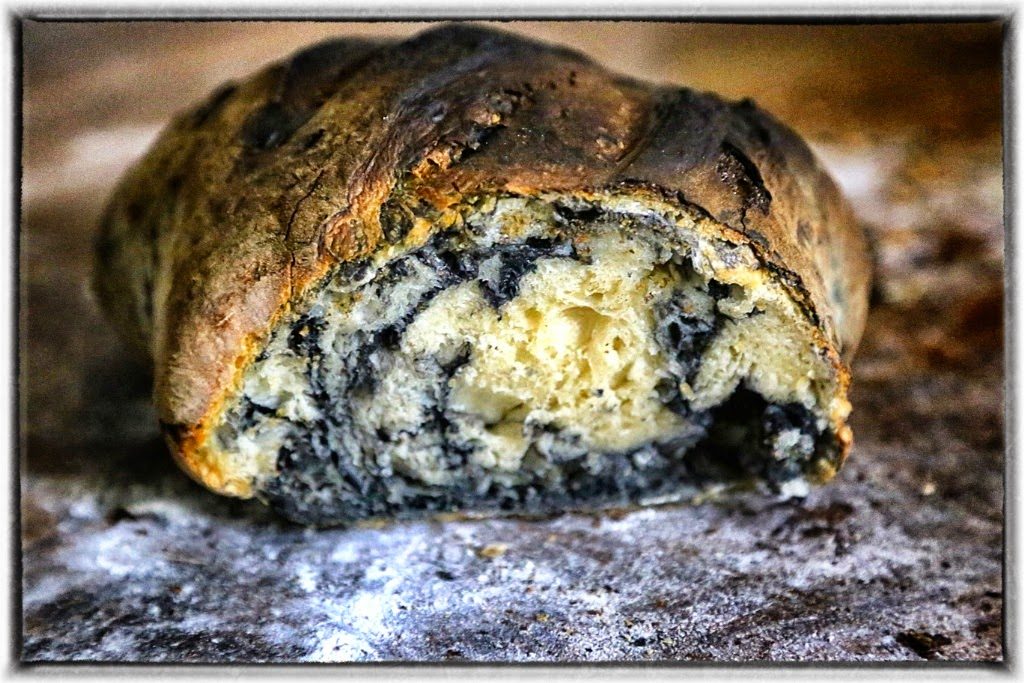 I had stayed the night in the centre of Bath at the stylish Abbey Hotel and dined at the adjoining restaurant Allium Brasserie, headed by chef Chris Staines. At first glance I wasn’t inspired by the menu (which was rather meat dominated). But I was wrong. For once fine dining was sparkling with flavour when so often it is form over content. I particularly liked the truffle and jerusalem artichoke salad, the light fluffy gnocchi and the lychee panacotta with granita which, overtired from my day, I asked if I could be served in bed. Pudding in bed! What luxury! They didn’t demur. Why don’t hotel guests do this ALL the time? 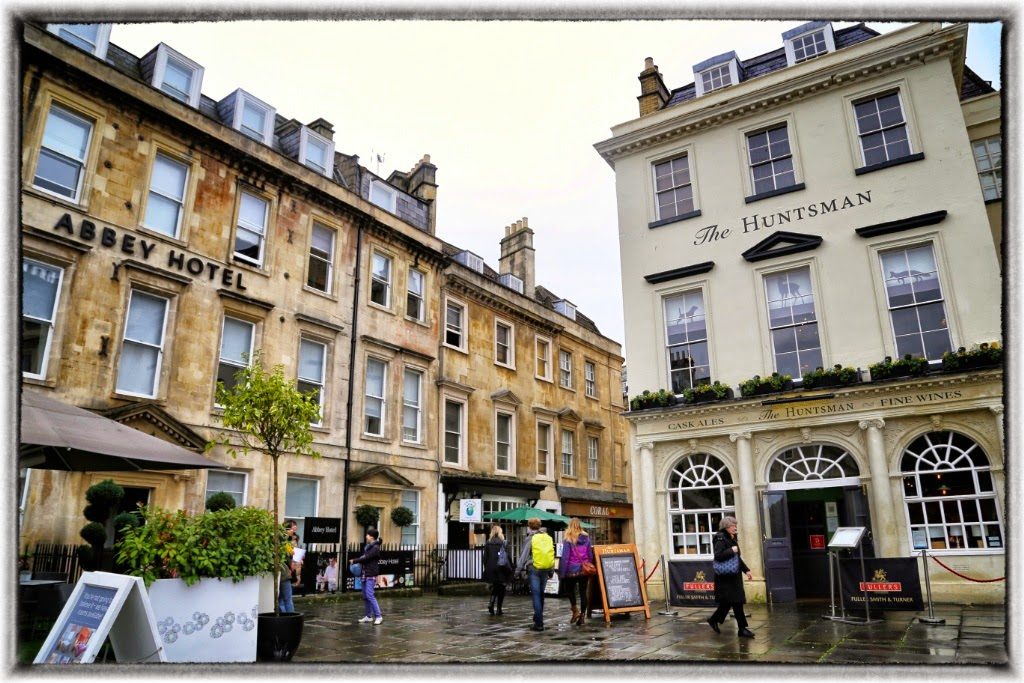 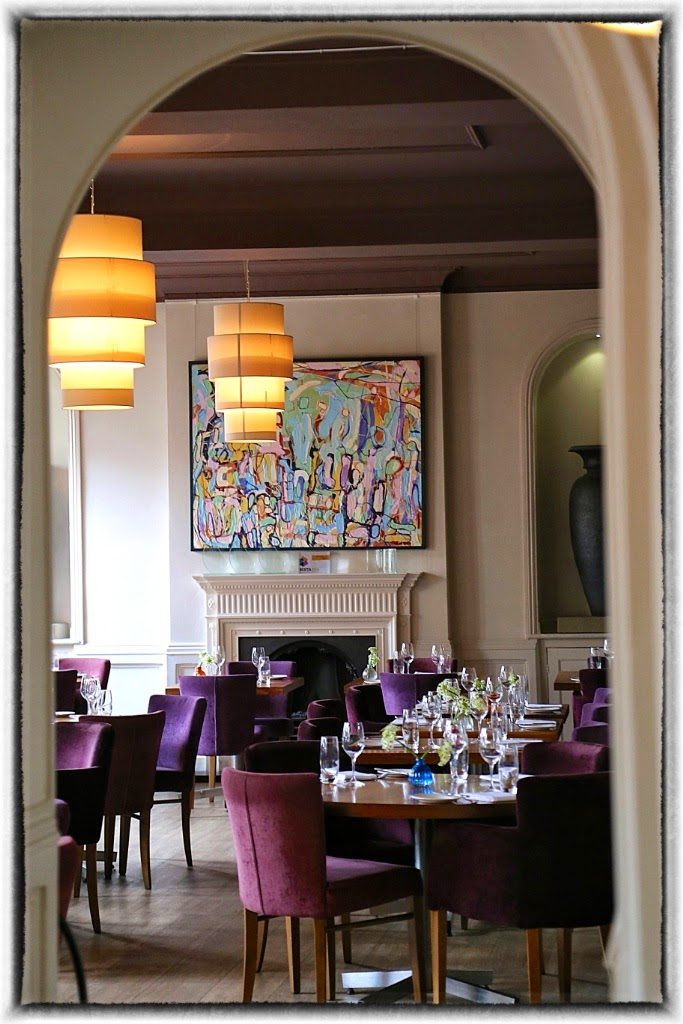