This blog was called The English Can Cook. The reason for this title was because, during the seven years I lived in France, many patronising and denigrating comments were made about British food. I don’t write much about British food, partly because I don’t cook or eat meat and many dishes contain meat. (But I think that we are world beaters when it comes to dessert or puddings.) But the reason the French are famous for their sauces is because they needed to hide the poor quality of their produce. British food may be plain in comparison but this is due in part to the high standards of our produce, we never needed to disguise it!
This last weekend I visited the county of Suffolk, a couple of hours away by train from London. I went to the Aldeburgh food festival, to Hillfarm and to Aspall, the ‘cyder’, apple juice and vinegar producers. 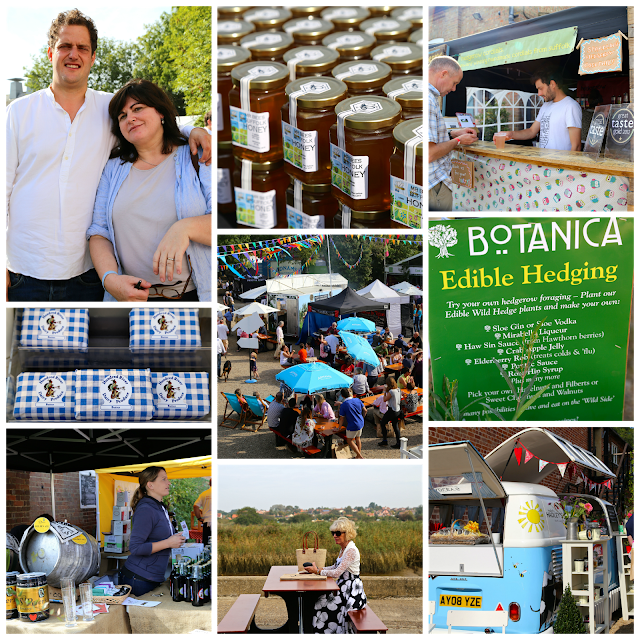 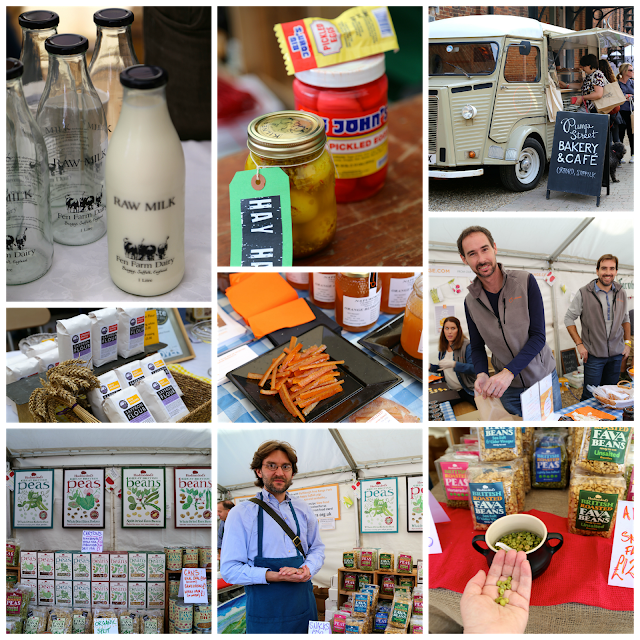 Clockwise from top left: raw milk from Fen Farm Dairy; pickled egg competition; Pump Street Bakery van; the guys that ran Naturorange selling candied orange (centre); Hodmedods roasted peas which were delicious; one of the Hodmedods creators; Hodmedods range, I like their packaging; Saffron flour made from Norfolk saffron, I bought this. 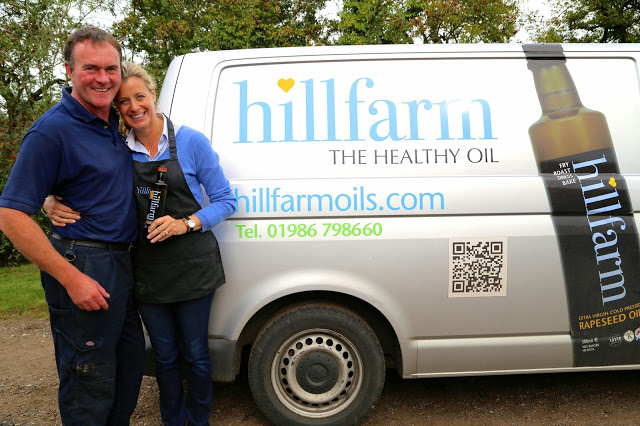 “We need to challenge the olive”, said farmer Sam Fair of Hillfarm Oils. He grows, cold-presses, bottles and sells rapeseed oil. Rapeseed oil has a fairly neutral taste and contains eleven times more Omega 3 than olive oil. The high amount of vitamin E enables the absorption of the Omega 3, but vitamin E degrades in sunlight, which is why Hillfarm rapeseed oil is in a dark glass bottle. Although the latest word on saturated fats is that they are not all bad – for instance, coconut oil is very high in saturated fats but the good kind – rapeseed oil is lower in saturated fats than olive oil. Rapeseed oil also has a higher burn point than olive oil, it doesn’t smoke when you use it for roasting for instance. As it is thinner than olive oil, less viscous, when frying, it makes vegetables crispier quicker.
Rapeseed oil is a good neutral oil (although it is a brassica, so some people may detect a mustardy taste) to use in cooking, and importantly it is a British product. Sam Fairs gets frustrated with the amount of money that the European Union spends on promoting olive oil, about 15 million pounds a year. Some olive oil is quite poor quality, so it’s worth expanding one’s repertoire of oils. 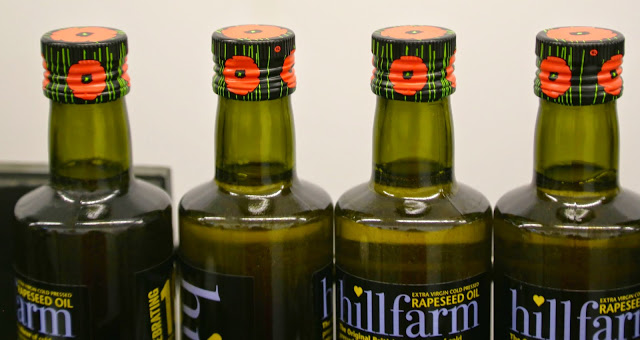 Rapeseed oil is a British cooking oil.
Olive oil comes from mainland Europe and can be overused today. Rapeseed oil is our local oil. Every part of the rapeseed plant can be used: the leaves for greens and the seeds for the oil. In culinary terms, it is particularly good for stir frying and baking. I use it to make vegannaise.

Below: we did a comparative oil tasting: vegetable oils, palm oil, olive oil, rapeseed oil both cold-pressed and cheapo versions that are adulterated and called rapeseed oil. The big surprise was the Jamie Oliver ‘light’ olive oil, which was tasteless.

The growing of rapeseed, known as canola in the United States, has been demonised for causing allergies and is a crop that needs the use of pesticides such as neonicotinoids, which has led to a drop in the bee population. (From December this year the EU will ban this pesticide.) More pesticides of this nature are required after a hot summer such as this year. Here it is grown in heavy Suffolk clay, which retains moisture. 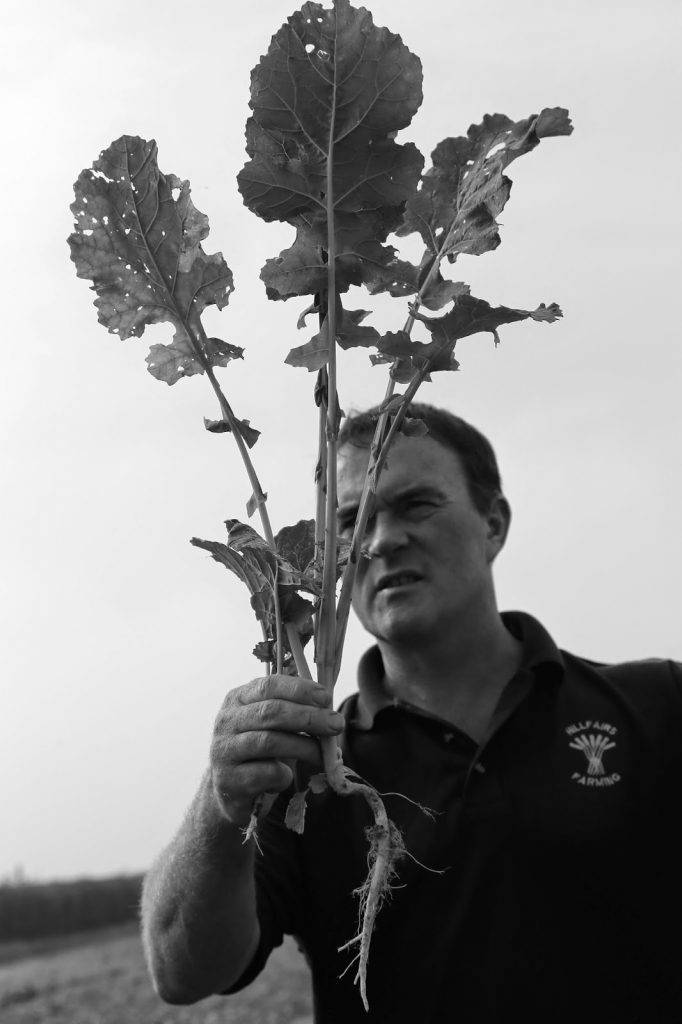 It’s a tough life being a farmer

Being a farmer is a risky business: it’s expensive, a combine harvester costs 300,000 pounds. This machine enables the farmers to plough and thresh 130 acres of rapeseed a day. (An acre is the amount the average horseman can plough in a day.)
Sam is concerned about the lack of young farmers coming into the business, only 3% of farmers are under 45. “You need a lot of money to start up”. There were County Council Farms for young farmers leaving agricultural college but these are being closed down or sold off.
When the weather is good, the combine harvester works late into the night and they work 7 days a week in the season. “I don’t want it to stop”, says Sam. “If the driver needs a break, I’ll climb in and take over”.
I tried the seat in the enormous machine, it is very comfortable and springy. “You need that, they spend hours in that seat”, explained Sam. Normally the cab is littered with cans of red bull “to stay awake”, says Sam’s wife, Clare. The combine harvester is like a lawn mower, if it’s damp it won’t cut the rapeseed so any chance they get, when the rapeseed is ready, they are in the fields to gather the crop. Nature waits for no one. This year Sam will make a loss, he took a chance and hoped that the price of his crop would go up, it didn’t, losing a third of its value. In terms of commodity prices, it is worth £100 a ton, but it costs £130 a ton to grow it.
The great thing about starting a business like this is that Clare Fairs gets to join in the business, developing recipes and doing demonstrations. “I get to see more of Sam”, she says. 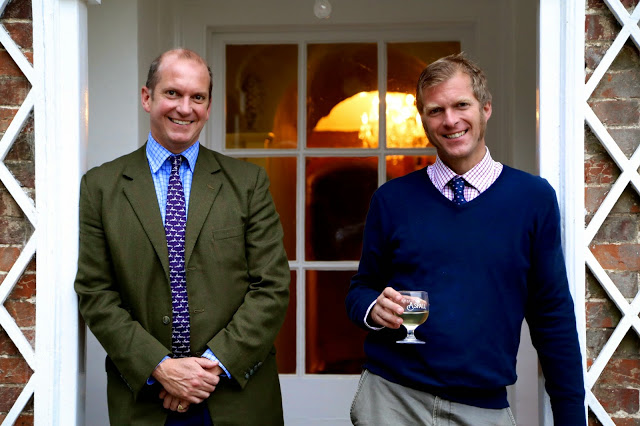 The brothers, Barry and Henry Chevallier Guild, who run Aspall, standing outside the manor. 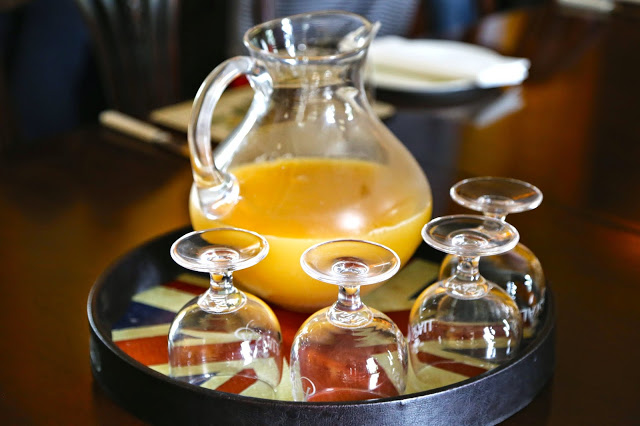 Cider or Cyder, as an ancestor, Clement Chevallier, in 1729, called it, used to be so celebrated in Europe that it was regarded as better than wine. We seem to have lost the habit of drinking cider. I visited the Aspall manor in Sussex, the glorious seat of this family, the Chevalliers, who can trace their ancestors back to the 15th century. They count Lord Kitchener amongst their forebears. Brothers Barry and Henry Chevallier Guild invited me into their beautifully appointed living room where we looked at slides and videos of Aspall history. It was a bit like being shown the family photo album and old home movies, but this time of a particularly interesting and illustrious family. I watched sweet black and white footage of Henry and Barry as blond headed children in shorts, picking apples; their feminist grandmother Perronelle, determined to make a success of the business, one of the first women to attend agricultural college and a founder member of the Soil Association; the creator of their cyders, Harry Sparrow, after whom of their cyders is named, recounting the tragic years of world war one, where he served as a malnourished soldier.

Aspall are reviving the art of cider, making a range of ciders in different styles, from effervescent to flat, from sweet to dry, and a return to an original type of still cider, sold in English taverns of old, ‘cyderkyn’. At the moment the market is being flooded with cheap Polish apples, as they can no longer sell them to Putin’s Russia. Aspall only use British apples, using those that are not deemed good enough to sell in supermarkets because they are “too green, too red, too big, too small, not the right shape”. 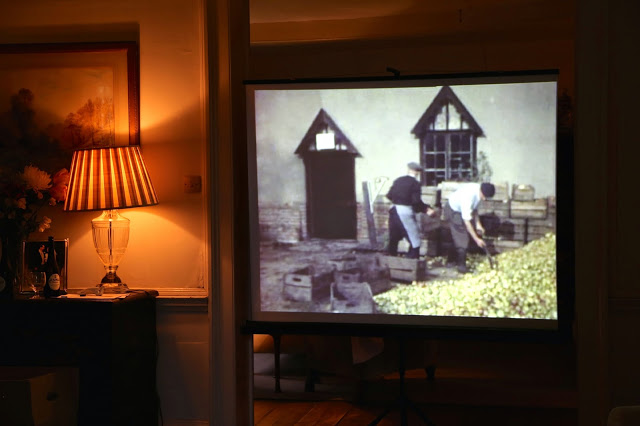 They also make vinegars ranging from apple cyder to an apple balsamic as well as the classic red, white, malt and balsamic vinegars. I use their cyder vinegars to make pickled apple relish, for instance. I talked to Henry about creating a British verjuice, something I regularly use in cooking. 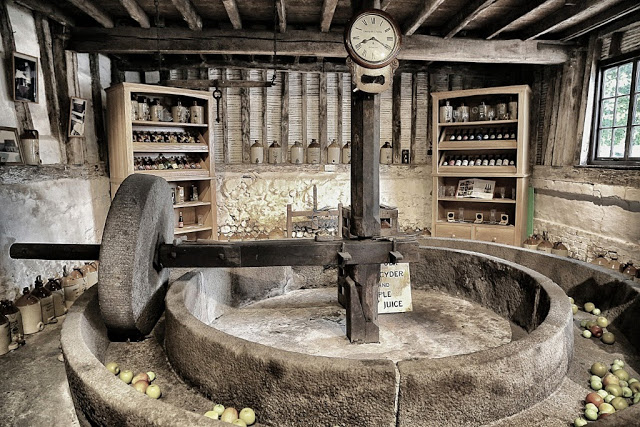 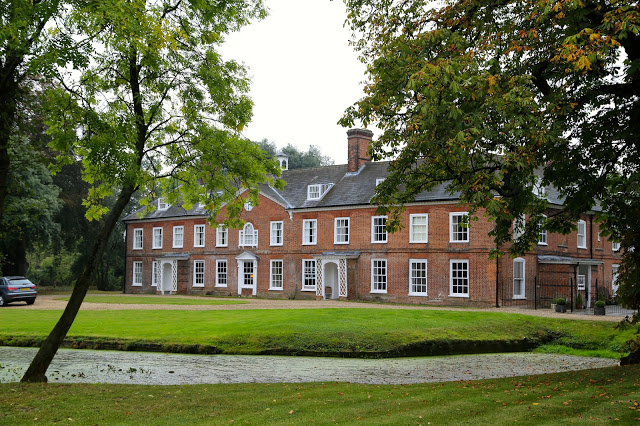 I went with a large party of bloggers on this trip: virtually everyone fancied the whiskered and handsome Henry Chevallier Guild while making noises about ‘always having wanted a man with a moat’. It was nice to hang out with these ladies; the breadth of knowledge about food amongst food bloggers is equal to that of any food writer.

Previous Post: « Our food at the British Street Food awards in Leeds
Next Post: How to make a wedding cake »