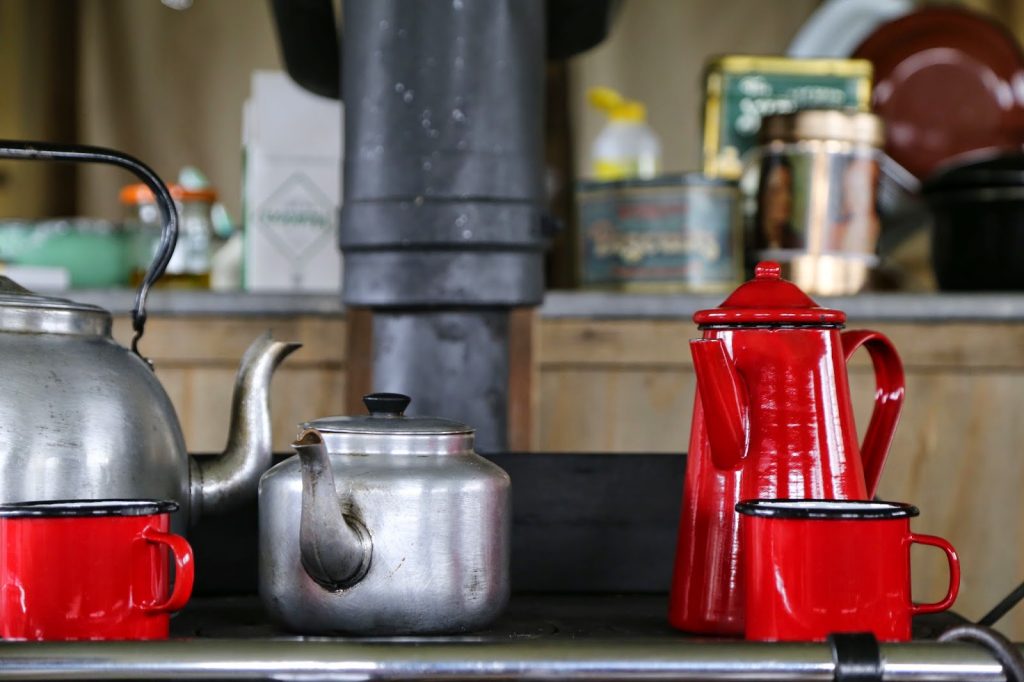 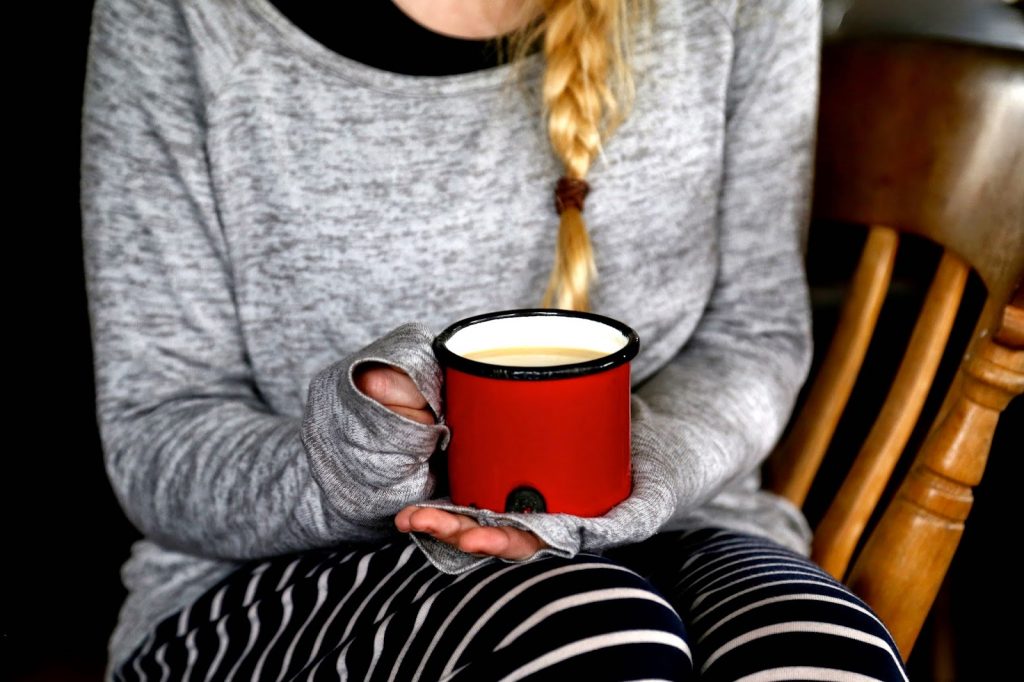 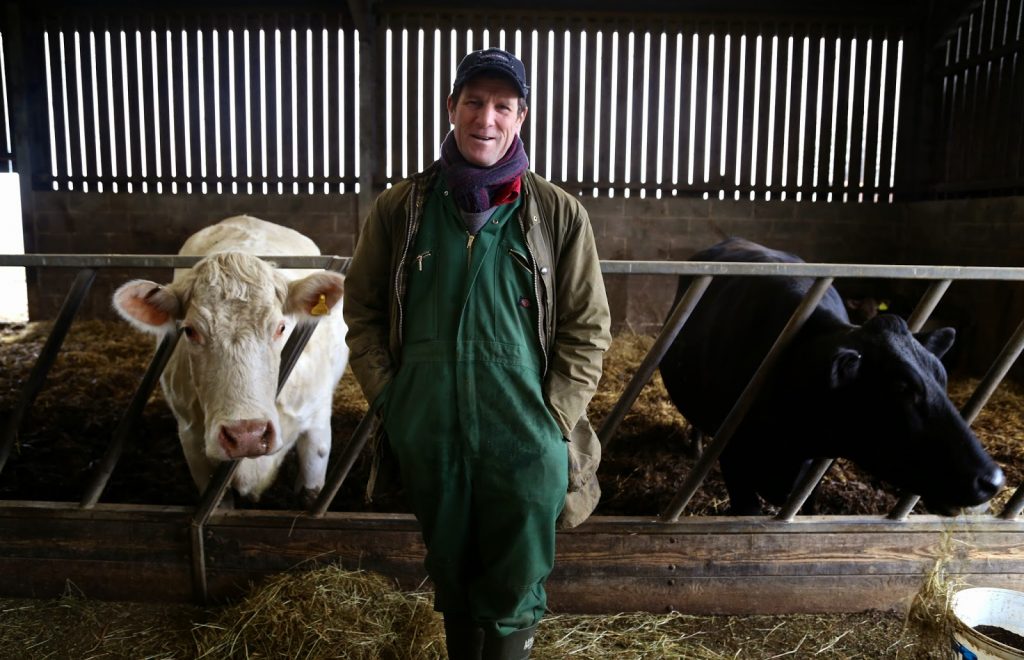 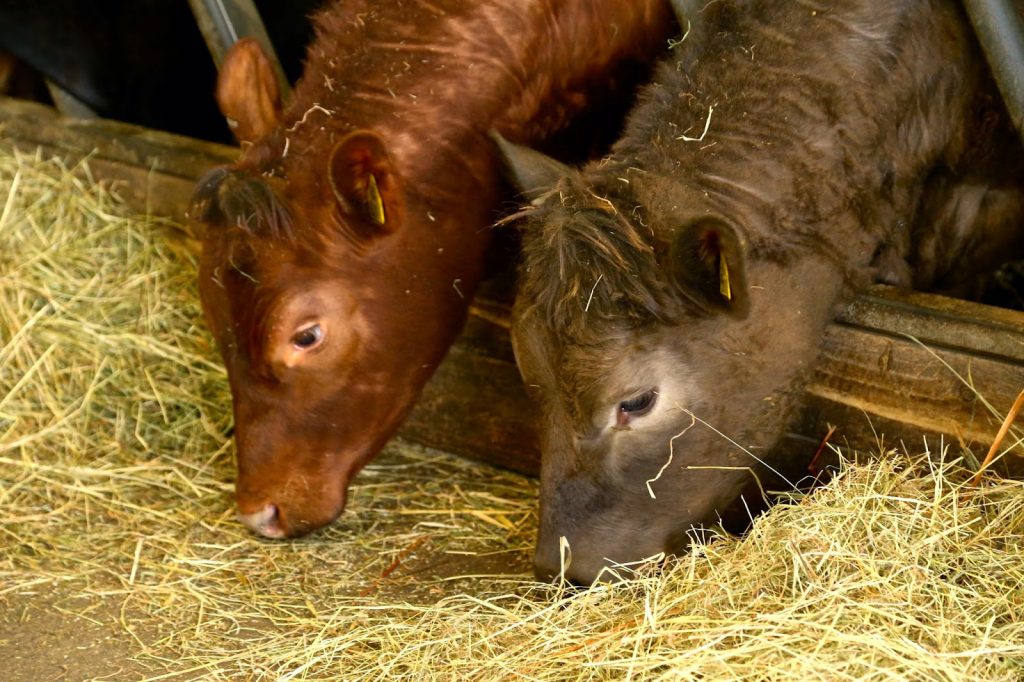 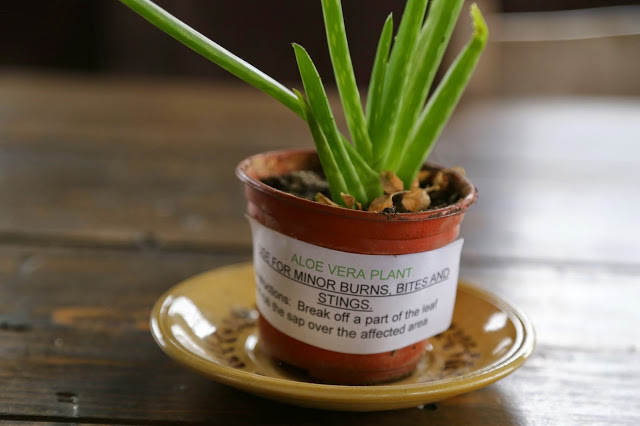 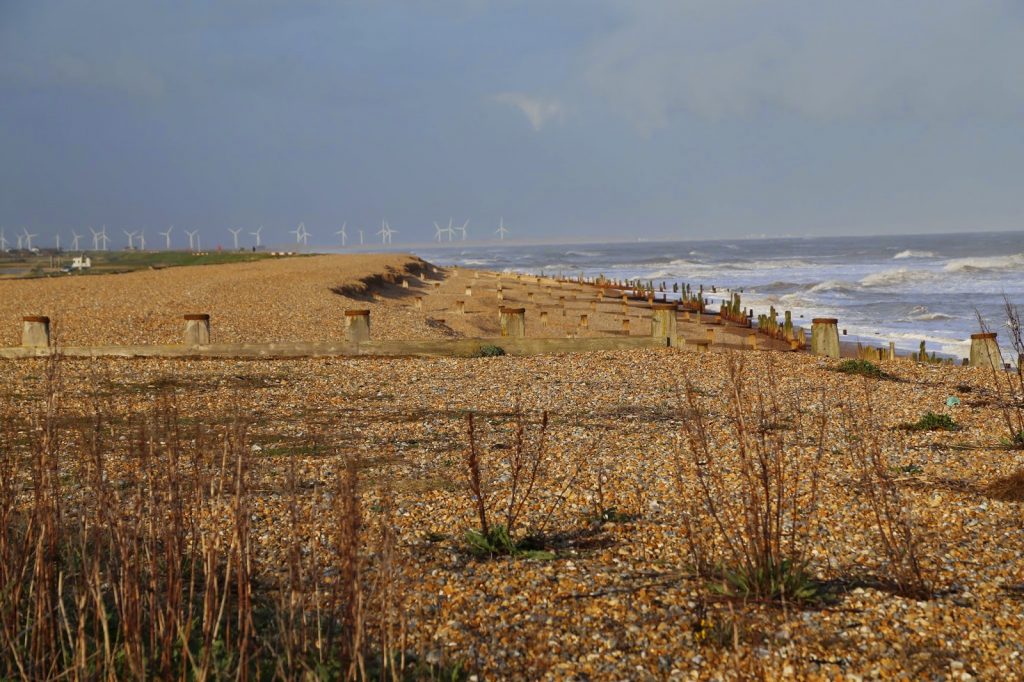 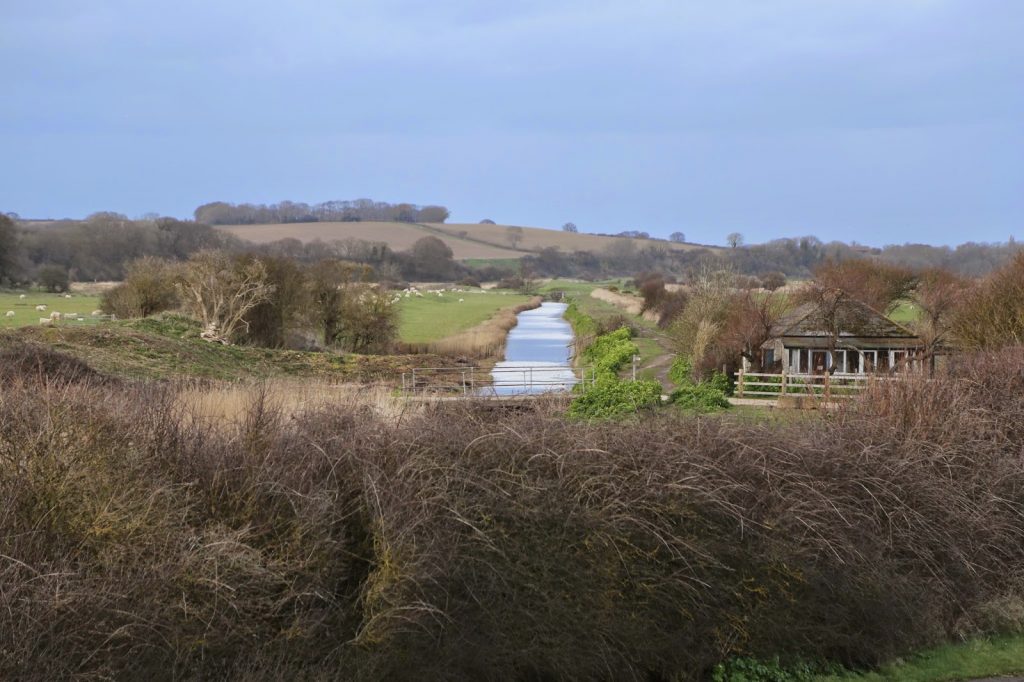 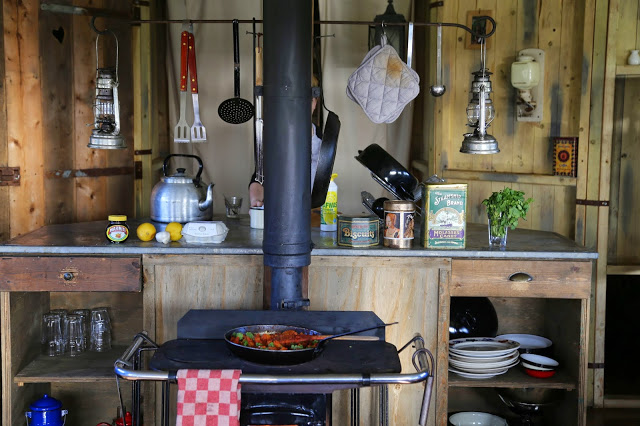 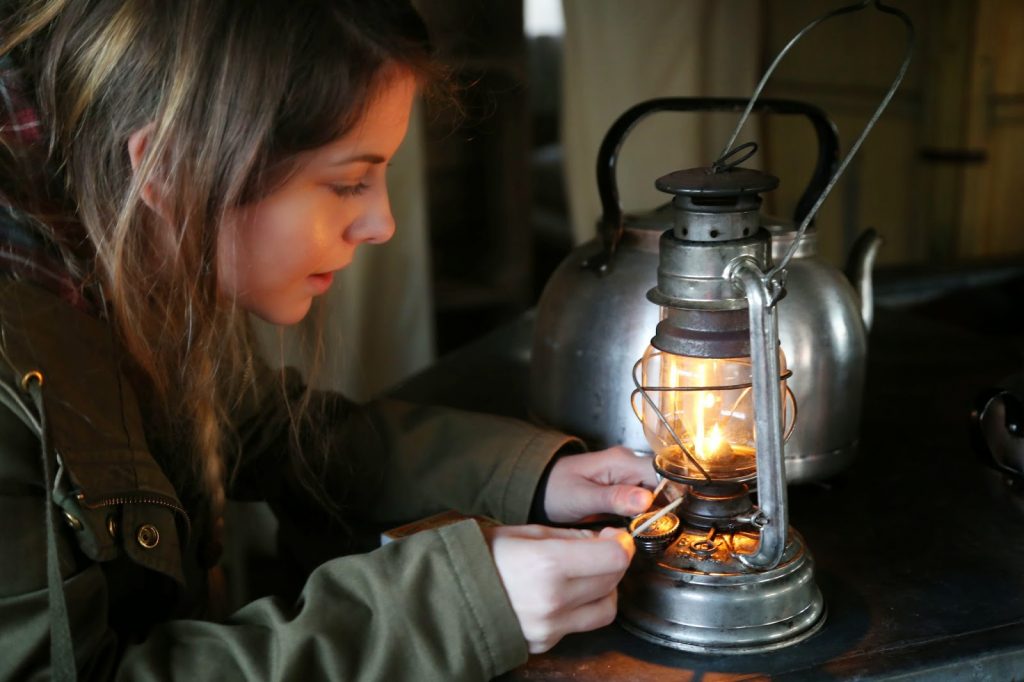 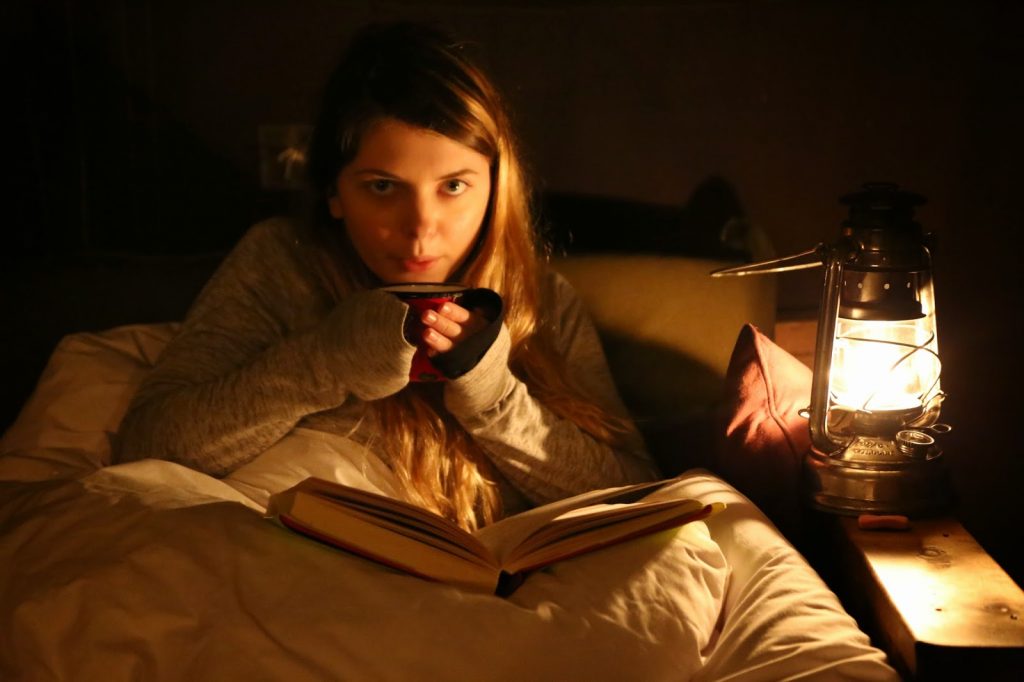 Lunsford farm near Hastings is one of Feather Down farms most popular locations. Feather Down has installed posh army tents with beautiful interiors in farms all over the UK and Europe. There are two bedrooms plus a ‘cupboard’ bed which my daughter bagged, thrillingly reminiscent of Harry Potter. There is no electricity, only a wood burning stove, which provides both heating and cooking. On the artfully aged pine wall hangs a manual coffee grinder, there are vintage tins and enamel cookware in cream and red stacked in the wooden fruitbox shelves. Lighting consists of two paraffin burners and two overhanging candle chandeliers over the large wooden table. The sink and kitchen counter are made of zinc. It’s like living briefly in a ‘Toast’ catalogue photography set. Have you seen them? They tend to feature dreamy lank-haired waif girls clutching hot water bottles and modelling expensive thick mohair socks in shabby chic farmhouses.
The only downside is it takes two hours to make your first cup of tea in the morning, I got up at seven every day to build the fire. There was a dank wait when we arrived on Friday evening when my daughter announced, a witty Withnail reference “We’ve gone on holiday by mistake”. The wood stove burned, even filled to the brim, for just one and half hours. My main task over the weekend was making sure it stayed lit; shopping trips or a drink at the pub had to be short.
The tents are on a spectacular ledge overlooking the sea, however this past weekend the UK experienced 100 mile an hour gales, and it felt as if we were buffeted in a ship, wooden floors creaking and canvas flaps blowing.
Without electricity, it became a digital holiday, a break from laptops, social media, phones, tv, radio and netflix. My daughter read to me while I cooked, enjoying the challenge of coming up with meals using ingredients from the farm’s ‘honesty shop’, made on a wood powered stove top.
The farmer, Andrew Dunlop (of the Dunlop tyre dynasty) is the third generation of his family to run a farm. His grandfather came down from Scotland in 1870 to farm in Hendon, selling hay and horse manure to the city of London, which still functioned with horse and carriage. He bought farms for his children, one in Hastings.
On Saturday morning Andrew gave us a tour of the farm; we saw the cows, from the French breeds Charolais and Limousin, tearing at hay in the cowshed. One large bull drooled at the cows in the next compartment. ‘In season’ the cows go mad, mounting each other. Andrew explained that he has to watch that bulls don’t end up with their daughters, by rotating stock and buying in new cows. Andrew is concerned by the 80% drop in wading birds as a result of the reduction in wetlands.

“I haven’t seen a plover for 15 years” he lamented “nor a hedgehog, they’ve been decimated by badgers who are spreading TB to the cattle”.

Between Hastings and Rye beach runs a shingle beach and behind that, a marsh. Hastings is most famous for the invasion by William the Conqueror in 1066, a date that every English schoolchild knows by heart. It seems that every invader had the same idea: both Napoleon and Hitler threatened to invade at the same spot, convenient due to the narrowness of the channel between France and England and the lack of cliffs to impede progress. A defensive military canal was built in 1940, in four years, by hand, by Irish navvies. It couldn’t be done in that time now, even with modern technology.
Andrew is the last potato grower in these parts, every other potato farmer has given up.

“People have stopped eating them, they eat differently, they shop differently” he said, referring to the modern low-carb diet and supermarket shopping where prices are driven down.

“Their potatoes taste like cardboard, my potatoes, the Manatee and the Wilja, are fantastic”.

After the war, grenades were found in the potato fields, the pickers would gather them and throw them into a pile in the middle. Then the bomb squad would be called to blow it up.

I tried the red-skinned Manatee, enormous potatoes the size of a boxing glove, in a vapour of potatoes and cheese, then in a tomato sauce with Bombay aloo spices. They tasted of potato, proper potato.
On the Saturday night, wood-fired-pizza-oven-night, I made home-made pizza bases for us and another family. I did the bases, the other mum did the toppings.

“Buy proper mozzarella balls, none of that cheap Danish shit” I snapped, momentarily revealing my food fascism to a stranger.

On the final day I made brunch of American style thick fluffy pancakes, with maple syrup and bananas. The fresh farm whole milk, the delightfully uneven and dung smeared farm eggs with tangerine yolks, the golden farm butter, made this an extra pleasure. 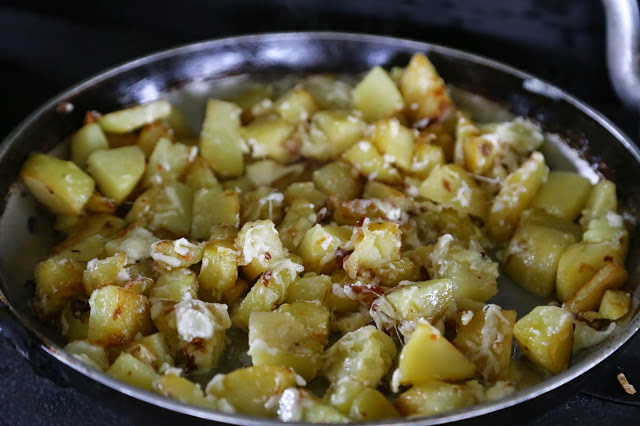 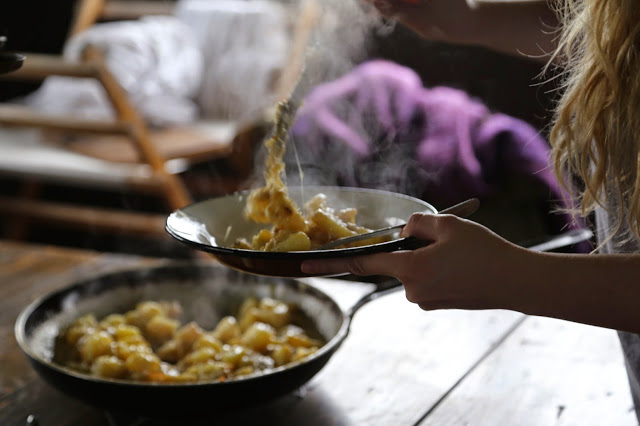 I first made this when staying at an abandoned water mill in Les Vosges. This is a typically Vosgien dish, they call it pommes de terres à l’étouffée. At the time I was going out with a cross-dressing anarchist lumberjack who was squatting the mill. I served this to his maman and all his cousins who visited for the day. The cousins had recently returned from an accordion festival in the centre of France, they played hypnotic accordion music over lunch. It was a bucolic scene like a Manet painting. His family couldn’t believe that an Englishwoman could cook.

Fill the wood stove with as many logs (properly dried, you can tell because they are light to handle) and burn the wood until the stove is at it’s highest heat. Prep the potatoes then par-boil them in a large saucepan, on top of the stove, covered with salted boiling water for about ten minutes or until you can easily prick them with a fork but they mustn’t be too soft either. Drain them in a colander.
Take a wide cast iron frying pan and heat it up on the stove. Cover the bottom generously with olive oil. Add the shallots and fry until golden then add the garlic. Add the potatoes in one layer and cover the pan. Fry for around 15 minutes, turn the potatoes, replace the lid and fry for another ten minutes.
Add the cheese, leaving the feta cubes until last. Season and serve. 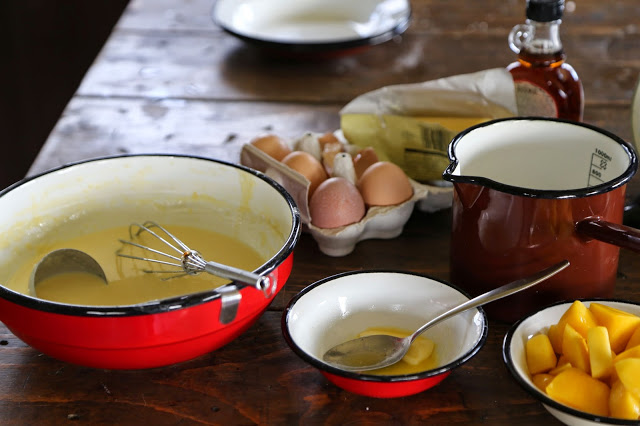 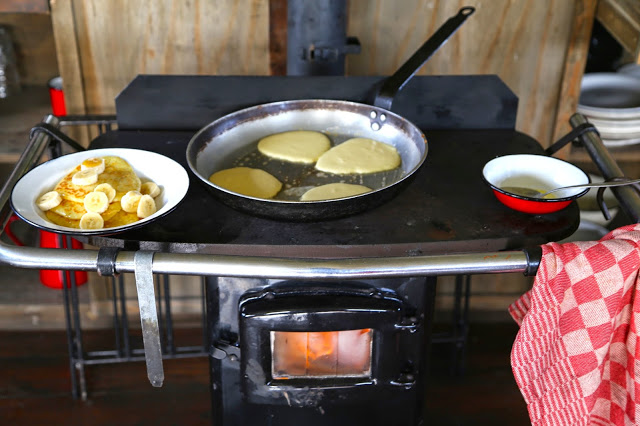 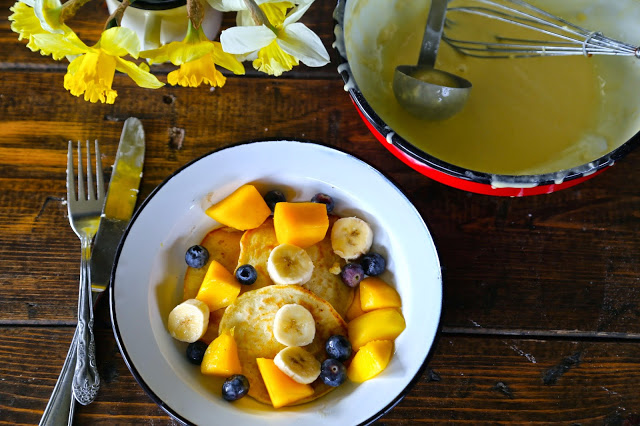 Tropical fruit and maple syrup pancakes over a wood stove

Make sure the stove is fairly hot.
Place a flat bottomed cast iron frying pan or crepiere pan on the wood stove until the bottom is hot. Rub a little of the melted butter on the pan. Using a small ladle, drip the pancake batter into a circle or near as dammit on to the pan. I could fit four small ones at a time. When the batter looks bubbly and has holes in it, flip the circle over. Cook until golden. Serve on a plate with the fruit and maple syrup. Add more butter if desired.

For first timers who want extra comfort I would recommend you take:
A small gas stove or at least a flask of hot tea/coffee for when you arrive.
Extra candles*
Extra toilet paper*
A wrap or small blanket for chilly nights on the sofa
A wind up radio
Extra pillow cases and pillows if you want more than one pillow.
Your own towel for washing.
Extra tea towels (you get just one)
Tin foil*

Food supplies:
Think in terms of one pot meals like stews/currys/pasta with sauce/
Tea bags*
Coffee beans* although they give you enough for a couple of pots of coffee.
Sugar*
Salt*
Milk*
A couple of tins of soup*
A can of chopped tomatoes*
Spaghetti*
Olive oil
Onions
Garlic
Basic spices
Some fresh parsley/coriander
Bread*
Butter*
Marmite
If you want to make your own pizzas take yeast, flour, mozzarella, tomato pasta
If you want to make pancakes take baking powder

* items you can get from the farm shop but if you want better products, i.e. Maldon as opposed to table salt, bring your own. The dairy products should be bought at the farm shop.

To stay at Feather Down Farms go to their site here. You can book for the weekend, a whole week or just midweek. The latter is cheaper. I would suggest you book quickly as the schedule is filling up already.

A video posted by Kerstin Rodgers/Msmarmitelover (@msmarmitelover) on Mar 28, 2015 at 5:09am PDT

Previous Post: « Raki supper club, Turkish flavours, in pictures
Next Post: Athens during Lent: beyond the crisis, the best food and drink »