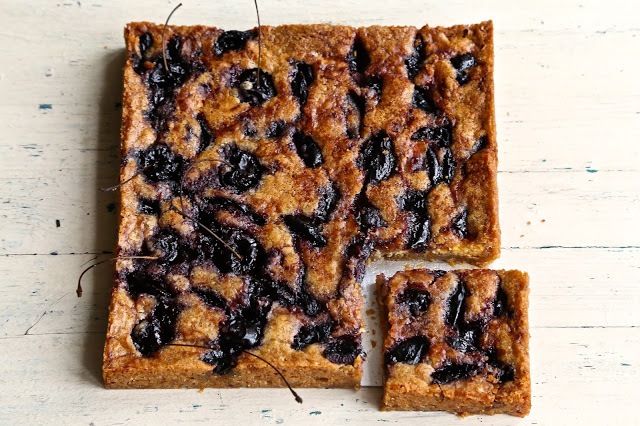 This weekend I was sent an enormous box of giant juicy Kordia cherries by Adventures in Fruit. Saturday, Sunday and Monday I ate a kilo a day by myself: I had purple stained fingers and lips but I just couldn’t stop. It got to the point that I wouldn’t have enough cherries left over to create a recipe.
Cherries were introduced to Britain ever since Henry VIII tasted them in Flanders but the genus (related to plums) originally came from Anatolia/Central Turkey where cherries are so common that they juice them. Unfortunately, they tend to be very expensive in the UK and the season is short. These Kordia cherries are particularly sweet with shiny dark burgundy skins. It is almost a shame to cook them when they taste so brilliant eaten raw. Kordia cherries are British and grown at an award winning farm in Kent called Mansfields. The cherries are currently available at food branches of Marks and Spencer.
In Russia (and I did this for my Russian supper club a few years ago) they often pair a sour cherry sauce with white fish such as sturgeon. Cherries, sometimes dried and salted, are widely used in Persian cuisine.
I generally include at least one cherry recipe in my cookbooks, sometimes with a combination of sweet and sour cherries. One of my favourite recipes in MsMarmitelover’s Secret Tea Party is the sour cherry baked alaska/artic roll plus a cherry brandy concoction. I also include another blondie recipe in the book, which was so successful with tasters that I’ve decided to develop a white chocolate cherry blondie with a hint of rum. Think of a black forest gateau after it has snowed.
Blondies are brownies’ fun, slightly lower-class sister.  I’m not a chocolate snob – I adore white chocolate, which isn’t really chocolate at all but some kind of chocolate lard. Anyway, you’ll LOVE this recipe. You can leave the stems on if you like, I did both, but make sure you pit the cherries using a cherry pitter or a sharp knife, you don’t want dentistry bills. 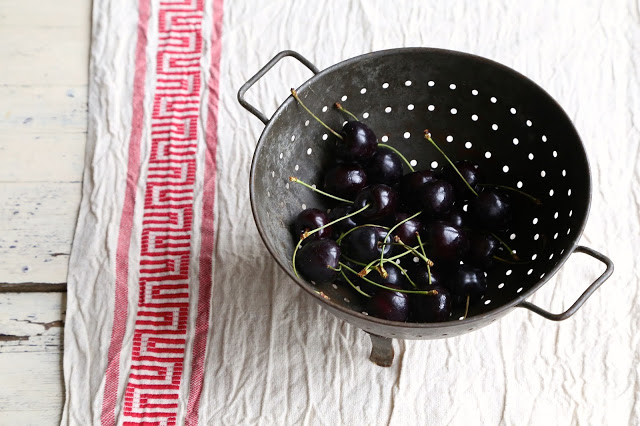 Butter and flour the tin. In a stand mixer or by hand, beat together the butter and sugar until fluffy. Add the rum, beat again. Add the egg, beat again. Then tip in the flour and thoroughly mix. Add the vanilla salt then the white chocolate. Prepare the cherries by using a pitter or cutting them in half and prising out the stone.
Preheat the oven to 180ºc.
Pour the mixture into the pan, patting it so that it is spread evenly. Then push in the cherries at intervals into the blondie mixture. If using some whole pitted cherries, leave the stalks sticking out. The cherries will slightly poke above the mixture, but don’t worry the mix will rise during baking.
The reason I’m adding the cherries last minute is that they are so juicy that they stain the batter. If you don’t mind purple blondies you can put them in the mixing bowl/stand mixer with the rest of the ingredients! But I think the blondies are more attractive when the cherries are added afterwards.
Put the pan in the oven and bake for 40 to 45 minutes. You want them quite squidgy so don’t overbake but the mixture will firm up once it cools.
Cut into squares and serve!

150g of soft brown sugar (or more, make the quantity you want)
50ml of rum (or more, if you like it stronger)

Rather than adding rum to the recipe you can infuse the sugar with rum or any alcohol. Spread the sugar (preferably brown) on to a baking try covered with parchment paper or a silpat and sprinkle it with rum. Bake on a low heat (not over 150c) for half an hour. Then remove from the oven and let it cool. Use the parchment paper or silpat to funnel the alcohol flavoured sugar into a jar. Keeps indefinitely.

Previous Post: « Anarchy and Natural Wine in the South of France
Next Post: Make peshwari naan at home »