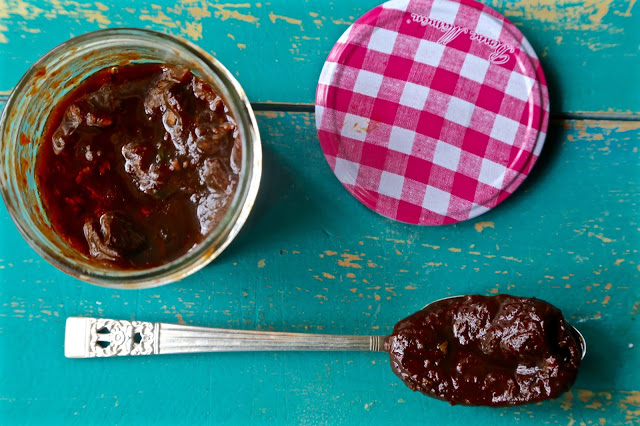 Chipotle en adobo is one of my go-to ingredients for an authentic Mexican flavour in my cooking. But it’s also good for anything else you fancy… in lasagne, on toast, in baked beans, in salsa. I absolutely love Mexican food, I think it is vastly underrated as a cuisine. What we call Mexican is mostly Tex-Mex, heavy and cheesy- in short- enchiladas. Now I love heavy and cheesy as much as the next lady but that’s not how they eat in Mexico. Over the last year, I’ve had a few meals by top Mexican chefs coming over to this country. Selfridges held a Mexican food festival this year ‘Year of Mexico’ in the food hall. Unfortunately the meal at the Hix restaurant by Benito Molina & Solange Muris was a disappointment, kind of laughable. As I said to the PR, it’s no point deconstructing Mexican food when most UK people, including many food critics, don’t know what constructed Mexican food tastes like.

The next posho Mexican I ate was at The Typing Room at Bethnal Green Town Hall in the old Viajante restaurant. This meal was a collaboration between chef Lee Wescott and Mexican chef Guillermo González Beristáin of Pangea.  It started off on a high, with a gorgeous starter of Marmite butter on IPA sourdough but went downhill, ending up as that no-mans land of high cheffery, droplet sauces, needless mucking about with ingredients in the name of innovation and absurdly fiddly plating. Yes it all looked stunningly lovely. So what! I eat with my mouth not my eyes. Is this food for a generation that prefer to instagram their food than eat it? I also felt that there was hardly a trace of Mexico in the meal. Seems like Guillermo was more influenced by Lee than the other way around.

Finally I had a great meal, expertly balancing old and new cuisine while remaining authentically Mexican, at the Intercontinental Hotel by Chef Ricardo De la Vega of Frida restaurant in Cancun.

I’ve been to Mexico myself a few times. The first visit was waaay back as a young woman travelling alone, using a month long plane pass with which I could fly anywhere in America.  I used it to the max: spending nights in airports, flying back and forth to LA and San Francisco just to get free meals. There was one exotic destination included in this pass- Puerto Vallarta- so I flew there.
I chatted to a couple of English nerds at the airport and we decided to share a room. At the beach, I met two Welshmen, also staying at the hotel,  I jumped waves all day in the Pacific, went a deep shade of golden then went out with the four boys on the town. I drank more than I should. One of the English geeks went missing during a night time walk on the beach. I insisted that we look for him, nobody else including his mate gave a toss. I was so glad I persisted, we found him crawling along the sand, sobbing, without his glasses, blind. You know those times when you think, that was a near-miss for tragedy…
One of the Welsh guys asked me to go for a walk on the beach further up. We’d been flirting and I was slightly interested in him. Next thing I knew I was flat on my back on the beach and he was having sex with me. It was very uncomfortable. Who likes sand up their bum? I managed to get him to stop. I pulled up my knickers thinking, hmm was that rape? I blamed myself for getting drunk, maybe giving him the wrong signals, being alone with him. I wasn’t traumatised, just embarrassed. He wasn’t violent.
I spent an uncomfortable night at the hotel with the English boys, so hot and thirsty, that I eventually got a drink from the tap. The next day I woke up covered in huge blisters, six inches across, all over my body. I could hardly open my eyes my face was so swollen, this was Pacific sunburn. At breakfast the Welsh guy behaved sheepishly.
On the third day I flew back to San Francisco and checked into a huge dim hotel. I was on the third floor in a double room. There was a shared bathroom and toilet on each floor. That night the stomach cramps started and then the diarrhea. At first I could make it to the toilet outside my room. Then I blocked that and then, humiliatingly, the other toilets on the other floors. It was getting harder to walk, to get up. Eventually I was reduced to shitting in my bed. I’ve had dysentry in India and giardia in Nepal, but there was nothing like this level of pain and lack of control. It was disgusting and debilitating. I was too embarassed to go down and ask for help. Four days later I emerged from my room, weak and frail. I hobbled to a nearby drugstore and asked for medicine. But without a prescription they would only give me Immodium. I glugged this pink liquid and managed to order a couple of slices of toast at a diner. I’d seen nothing of San Francisco at all, bar the inside of that dark wood panneled hotel.
I managed to get on the bus to the airport the next day.  On the journey, I felt my stomach squeeze and I sat there, tears rolling down my cheeks, as I soiled my knickers. Despite this , somewhere at the back of my mind however, I felt like a ‘real’ traveller – vaguely heroic in a Midnight Express way.
My second visit was with my daughter when she was a teen. We travelled all around the country by bus: to Mexico City, to Jalapa, to Xico for a festival, to San Cristobal, to Oaxaca, to the jungle and the pyramids. We visited Frida Kahlo’s museum in DF, climbed the monuments, ate vibrant food and didn’t get sick once.
My third visit was a couple of years ago with my sister. We took the train from Chihuahua to the Pacific, through the copper canyon, rattling through tunnels carved out of rock. We got robbed on our first night while asleep at a beach side apartment in Sayulita, a small village near Puerto Vallarta, then had to bribe the police to get a report to claim on insurance. The food in Sayulita was beyond divine, check this recipe I nicked from a streetside stall for ceviche tostadas.  Then I travelled to Mexico City on my own and wrote this post, five great places to eat in Mexico City.
I love Mexico, I’d like to live there. 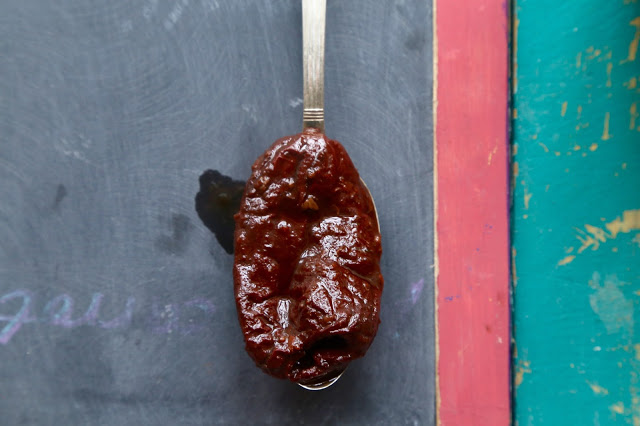 Make this amazingly easy recipe. You can use dried chillies. Next time I’m going to smoke my own home grown jalapenos and truly make it from scratch.

Cover all the dried chillies with boiling water and leave to simmer for about fifteen minutes until the chillies are plump.
Then scoop out the anchos (it’s obvious which ones they are as they are much  bigger) and leave the chipotles to cool in their liquid. Remove the stalks and seeds from the anchos. When the chipotles are cool enough to handle, I removed the stalks. Keep the liquid, you are going to use that.
I then put the anchos, the tomatoes, onions, salt in another pan and cooked them on a low heat for ten minutes or so.
Remove from the heat and tip the ancho tomato mixture in a Vitamix  or food processor or powerful blender and whizz it for about a minute. Use a little of the chipotle liquid if you need it.
Using a large saucepan add the olive oil, cinnamon stick, spices, garlic, fry on a low heat for a few minutes then add the ancho/tomato mixture, the vinegar and finally the chipotles and their liquid. Add salt to taste. You will need a good deal of salt. I find salt counteracts chilli also. Simmer for fifteen minutes or until the sauce thickens a bit. It’s done.
You want lots of the sauce which is great for drizzling. The chipotles themselves are not very strong especially after rehydrating and cooking. This is a mild but aromatic chilli sauce. Enjoy. 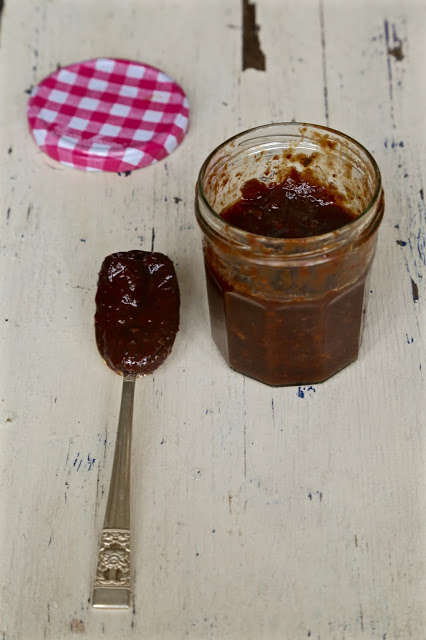