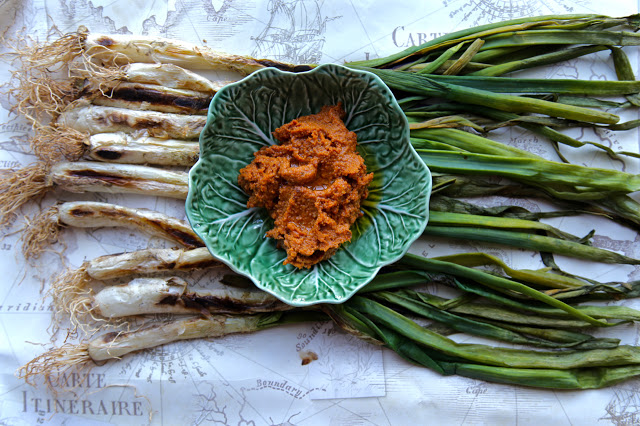 I think I first heard about calçotadas from Catalan food specialist Rachel McCormack, a small fierce Glaswegian who spent many years in Barcelona perfecting a low Caledonian-Hispanic growl of an accent. You can now hear her as a regular guest on Radio 4’s Kitchen Cabinet quiz show. (I must admit, although I’m a Radio 4 addict I never listen to the show as every time I switch on they are slagging off people who don’t eat meat. It’s really unfunny and clichéd and makes me want to punch them.) Strangely, I can understand Rachel a great deal better on the radio than in real life – she has a good radio voice.

A calçot is a kind of baby leek/fat spring onion sold from the end of January through March in Catalonia. They are cooked on an outdoor grill then wrapped in newspaper and served with romesco sauce, made from almonds and red peppers.

This is an excellent dish for a winter bbq. Line up the calçots and grill slowly on the embers of your fire. I have also made them on the top of my Aga. A cast iron flat pan on a gas stove should do just as well. The outsides char while the insides steam into a sweet subtly oniony flavour. Wrapping them in newspaper keeps the calçots warm and continues to steam them.

There is a technique for eating the calçots: you strip the vegetable of the outside blackened leaves, leaving you with a slim pale stem, which you dip into the romesco. Then you throw back your head and lower the calçot into your mouth from above.

As a replacement for calçots, you may use baby leeks or large spring onions. Serve with red wine or cava.

One can indulge in a calçotada feast at several London restaurants this year. I tried it at Brindisa Morada in Piccadilly, where next to us was a large jolly table of Catalans wearing bibs and necking calçots.

It’s a great idea for a party of friends or family: book in advance however, plus calçotadas are only available at weekends. Other restaurants doing them include:

Usually the calçot part is followed by a meat feast but, if you are vegan/vegetarian, you can ask for a suitable replacement.

You can buy genuine calçots at:

The romesco is usually made with dried Nora peppers, which can be bought at these places: 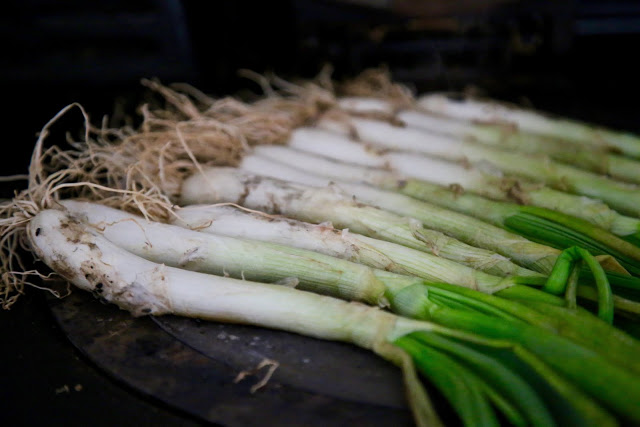 Half a dozen calçots/baby leeks/8 spring onions per person (although in Catalonia they’ll eat about 20 each)
3 large red peppers, grilled, deseeded and skinned
1 bulb of garlic
3 nora peppers, soaked, seeded (can be replaced by mild Mexican chillis such as dried Anchos)
2 tomatoes, skinned, diced
100g salted almonds or ground almonds or hazelnuts or a combination
75g of dried bread (sourdough or French baguette), ground into crumbs
1tsp of smoked sweet paprika
50ml of good olive oil
2tbsp of sherry vinegar
Salt to taste

While the calçots are slowly grilling, also grill the red peppers and garlic with their skins on. Place the nora peppers in boiling water in a pyrex jug and leave to soak for ten minutes. Use this opportunity to skin the tomatoes by scoring a cross on top, then leaving them to soak in the same boiling water for a few minutes. Remove the tomatoes and peel back the skin. Dice.
Once the pepper skin is blistered and the garlic bulb soft, I remove to cool. Strip off the skins and deseed the peppers. Squeeze the garlic from the bulb.
Put the red peppers, the roasted garlic, nora peppers, diced tomatoes, the nuts, the bread crumbs, the paprika, olive oil and sherry vinegar in a powerful blender or food processor and blitz until it forms a smooth paste. This can also be done in a pestle and mortar if you don’t have any kitchen gadgets. Taste and add salt.

This romesco is absolutely delicious. I couldn’t stop eating it, just spooning it out of the bowl and spreading it on toast. Addictive stuff. 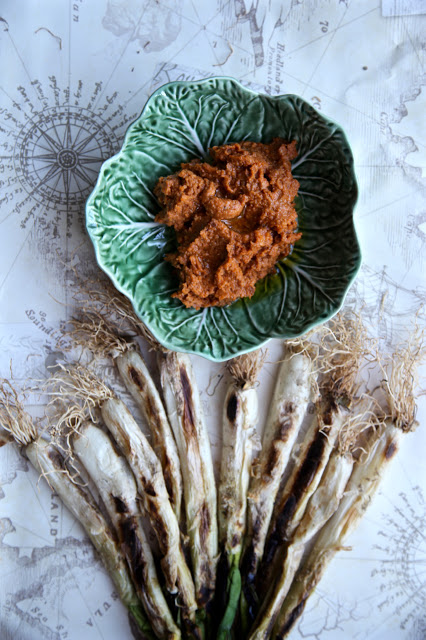 What to drink with your calçotada:

2012 Rioja Blanco A & A Martinez Laorden. On sale right now down £2 to £9.95. Quite a bargain for under a tenner. People associate Rioja with red wine, but the whites must be tried. Great even as an aperitif with anchovy stuffed or lemon stuffed olives.


Borsao Seleccion Tinto: £7.95 dry red Good value and wonderful with paella.
Bodegas Breigo Crianza: £15.00 from the Ribero region a little further south of Rioja. Tempranillo grape. Heavy red, I drank it with Spanish tortilla and a Catalan calçotada with romesco sauce. ‘Crianza’ is part of the Spanish system of labelling wines by age – a ‘Crianza’ wine is under two years old. ‘Reserva’ means it has been aged for 3 years and ‘Gran Reserva’ has been aged for 5 years for reds and 4 years for whites.

2013 Monastrell Molino Loco £6.95 from near Alicante, the Yecla region. A lighter fruitier red with a hint of black pepper.