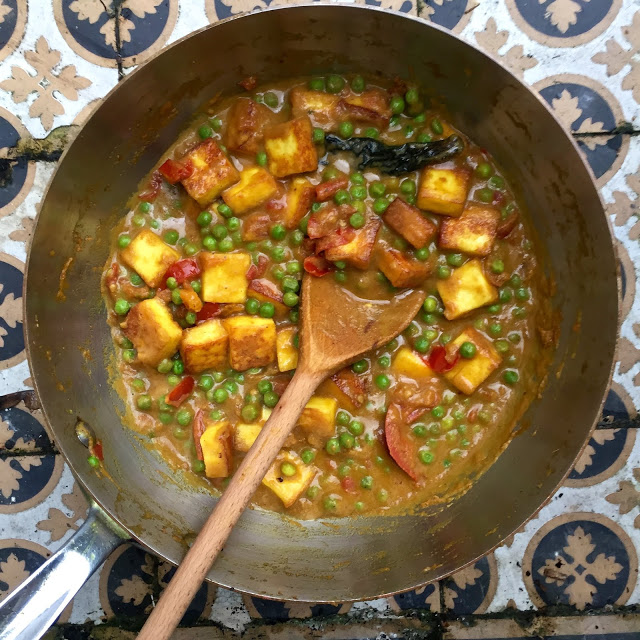 My daughter and I always order this when we are ‘getting an Indian’. There isn’t that much dairy in Indian food but paneer is an easy fresh cheese to make. But I’ll level with you, I mostly buy it. A pack of paneer and a bag of frozen peas and you are most of the way there. In this recipe I’ve used kashmiri chillies, a tip I picked up from Camelia Panjabi. Like her, I use them liberally because they aren’t hot, they just add depth of flavour. I order them online from amazon.
By the way, not sure if it is spelt mutter, matar, mattar or mottor. I’ve seen all of them on menus.
This is how I make it.
4 tbsp or more of Ghee or vegetable oil for frying
2 tbsp of brown mustard seeds
1 large brown onion, diced
1 stick of cinnamon
1 tbsp of cardamom pods
1 tsp coriander seeds whole
3 cloves garlic, minced
1 thumb of ginger, peeled, finely chopped
1 tsp cumin, ground
1 tsp coriander, ground
1 tsp fennel seeds
3 kashmiri chillies, soaked
100g creamed coconut, softened in it’s pack in a jug of boiling water (or 400ml coconut milk)
6 fresh tomatoes, chopped small
225g paneer, cut into 3cm cubes
400g frozen peas
Salt to taste
Garnish
Fresh coriander
A fresh lime, quartered
In a medium saucepan on a low to medium heat, heat up the ghee/oil adding the brown mustard seeds, letting them pop but not burn, then the onion, cinnamon, cardamom and whole coriander seeds. Allow the onions to soften then add the garlic, ginger, cumin, ground coriander, fennel.
While these are frying, boil a kettle and allow the chillies to soak in the water. I use a pyrex jug. I also put the pack of creamed coconut in the jug along with the chillies, keep it in it’s plastic packet.
Remove the onion and spice mixture and ground it up in a food processor, Vitamix or blender until it
is a brown paste. Then add the softened chillies, minus the seeds and stems and process into the paste.
Return the mixture to the frying pan and add the tomatoes. Continue to sauté for a few minutes then squeeze out the creamed coconut into your pan.
If it becomes too thick, feel free to add either boiling water or veg stock to loosen it.
Add the paneer and peas. Continue to cook, tasting for salt. I would add at least 1 teaspoon of good sea salt.
When your mattar paneer is cooked remove from the heat, adding fresh coriander leaves and wedges of lime. Serve hot with rice and other Indian dishes. 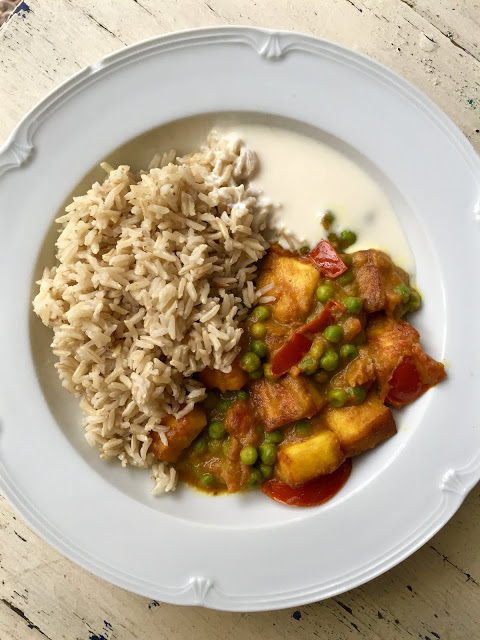