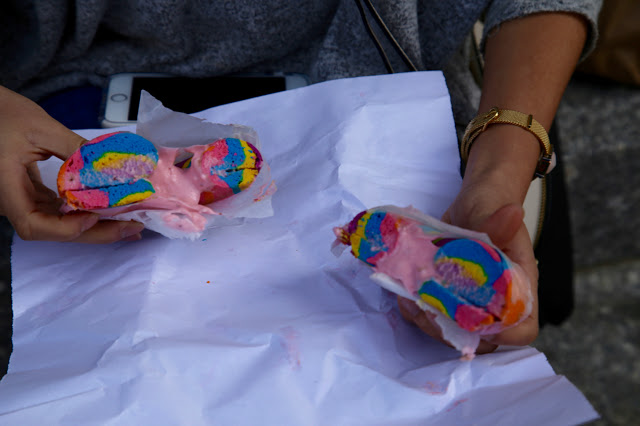 One New York borough that has gentrified in recent years is Brooklyn. Peak hipster Brooklyn starts at Bedford Avenue subway, continues through Larimer and ends up at Roberta’s.
The food is great, the prices not cheap and of course, there is the hype that leads to ridiculous lines at certain places.
Wandering around you can get your hair cut, visit vintage clothes stores and marvel at the hipsters. However my impression was that New Yorkers don’t dress up like the British, they are fairly conformist and casual. East London is way more hipster. 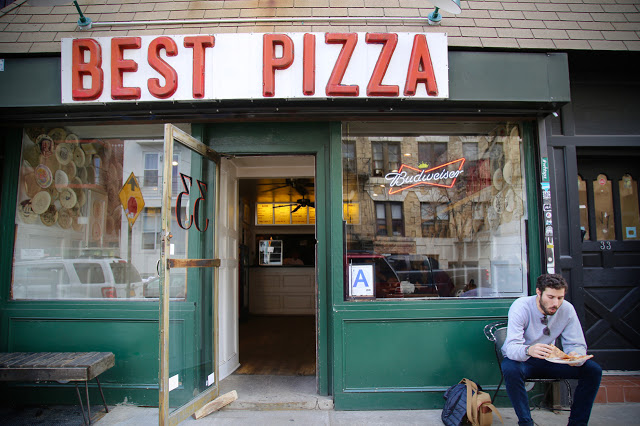 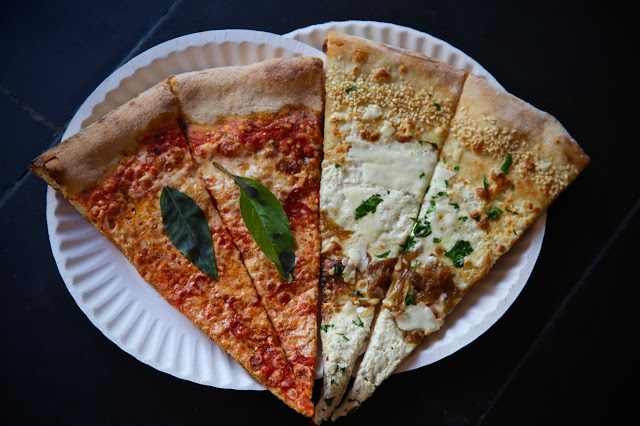 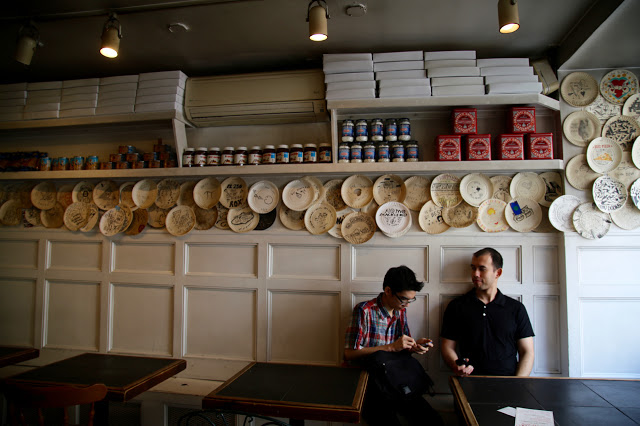 We had a slice of Margarita and a slice of white pizza with sesame seeds. Sesame seeds on pizza dough is a revelation and I think this is the way forward; to make pizzas a bit more like bagels. Both were thin fermented dough with wood fired blisters and equal proportions of sauce and cheese – in their words, New York style pizza. The chef from Chiltern Firehouse went there to get tips from Best Pizza’s Frank Pinello for the pizza section at the celebrity joint. Best Pizza is frequented by rap stars, has friendly staff and an ‘art’ wall with drawings on paper plates. I could have eaten more but I had to save space for the other places. 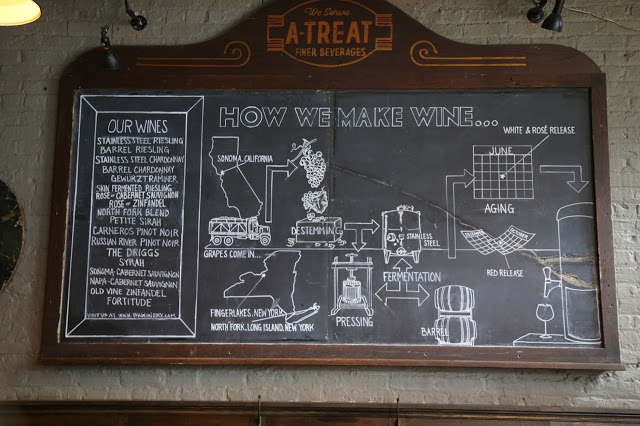 Friendly local wine bar which serves New York white wines as well as a good selection of other American wines. You can do tours and tastings, there is also a good menu of cheese, charcuterie and other wine matched foods. I was there too early to eat but it had a nice wood interior and tattooed staff. 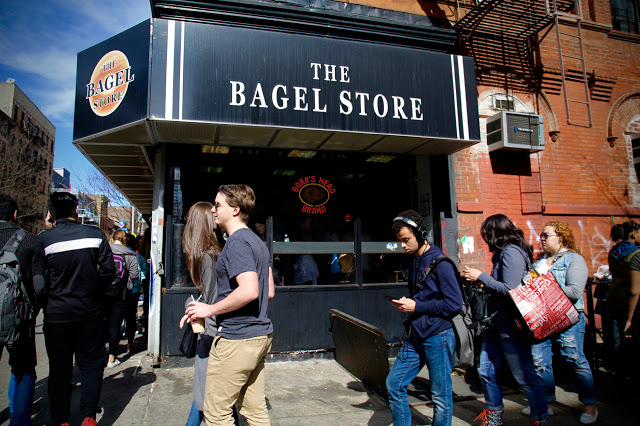 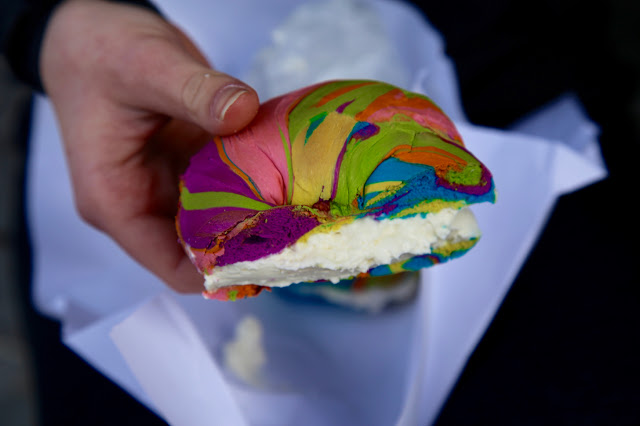 Groan. The line ran around the block and was at least an hour long. Why would anyone want to eat a bagel with food colouring? And sprinkles? And flavoured cream cheese? Sounds, looks, vile. I grew increasingly annoyed at the hype around certain New York establishments. Queues of young people wanting to photograph their food. This is food as a visual, not to be eaten. The downside of the  Instagram Age. The Bagel Store can also lay claim to something called a ‘cragel’, a fusion of bagel and croissant. The picture looked quite doughy and lumpen.
Now you might think that all this is hypocritical from someone who put a Smartie sandwich ‘recipe’ in one of her books (MsMarmitelover’s Secret Tea Party). Yes, I like silly food, cartoon grub. Without prejudice, I’d already visited Dominique Ansel’s bakery in Manhattan for the famed ‘cookie cup’ (almost as celebrated as the ‘cronut’), waited an hour, got to the front of the line and was told to queue again, this time outside. So I ordered a frozen s’more (disgusting, like a jar of ‘fluff’ on a stick) and an over-baked croissant. I wasn’t going to queue up any more when his basic viennoiserie wasn’t as good as Tescos.
Adding to my scepticism, I had a conflagration at Black Tap. Black Tap is known for towering milkshakes topped with oreo cookies, slices of cake and glasses rimmed with M and Ms, like multi-coloured daleks. Again this place had lines four hours long, going down the street and starting again, behind a thick rope, around the corner on another street. I asked the shivering girls at the front of the second queue why they were here:

‘We’ve seen the milkshakes on Instagram,’ they said, jumping from leg to leg in an attempt to warm up. ‘We’ve been here an hour already and we can’t give up now.’

Agog at the wait, I met a chef from the restaurant outside the front door:

‘Don’t you think the line is ridiculous?’ I asked.
He smiled. ‘Well, it’s good food’.
‘But is it healthy?’
‘Sure.’
‘It’s basically sophisticated McDonald’s, isn’t it? In fact I could make money by going to McDonald’s, buying shakes, dipping them in Smarties and flogging them to your queue,’ I joked.

At this point a woman standing next to him, a waitress, butted in: ‘Well you look like you spend a lot of time there,’ she sneered.
At first I didn’t understand what she meant. ‘Why’s that?’ I asked naively.
She gave me an exaggerated up and down look. ‘You are so heavy.’

Heavy is the American word for fat. I was really shocked. Did this waitress just call me fat? In the street? Outside her restaurant?
Reader, I lost it at that point. Trying and failing to think of stinging repartee, I came up with the lame and abusive ‘you are a fucking ugly cow’, my London accent bouncing on the sidewalk.
But to be frank, she was no oil painting.

But she kept on. ‘You are just trying to skip the line.’ She said to the chef, ‘she’s so fat’. Then, as she entered the restaurant, she threw back: ‘You should walk more’.

I’d walked 22k steps that day according to my FitBit.

Brimming with fury, I went up to the first queue and said ‘Did you know that this restaurant that you are all lining up for, body-shames its customers?’

Then I noticed the couple at the front were kind of big. The guy said in a resigned voice:

‘At this point anything you say is not gonna change my mind because I’ve been waiting two hours already.’ But looking back, they did seem discountenanced by my information. A restaurant sells outrageously fattening food and then criticises you for eating it?

I was slightly out of control by this point and went down the line declaring ‘Sheeple’ at them. 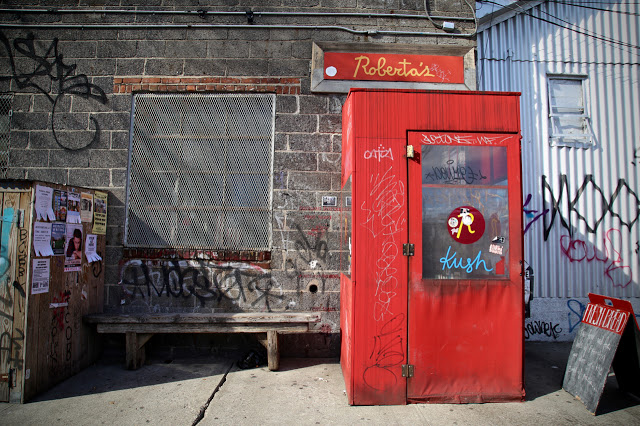 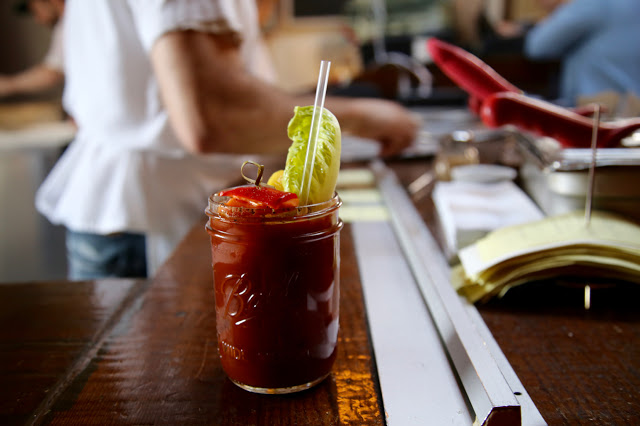 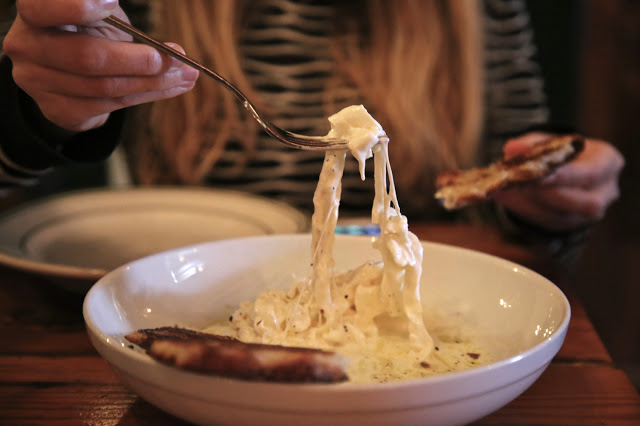 This is the second time I have visited Roberta’s. Last time I did an interview with Heritage Radio, (amazing food radio) housed in the same building, and scoffed a tasty grilled cheese sandwich. Roberta’s doesn’t look like much from the outside, you’d hardly notice the scruffy red door. Inside there is a pine scrubbed dining room, a garden, a radio station, wine classes, ovens. The food is so good. We noticed a trio further down our table and we said, When Harry met Sally style: ‘we’ll have what they’re having’. That was a big bowl of stracciatella cheese (burrata in creamy strips with char-grilled sourdough that you dip in the cheese milk), then a large sharing bowl of pea soup. We also had fresh pasta with cacio e pepe, then root beer and peanut butter ice cream. My virgin Bloody Mary was fantastically acidic and flavoursome, with plenty of salt and pickles. The pizzas looked the business too but we could barely move. Reasonable prices, a must visit.