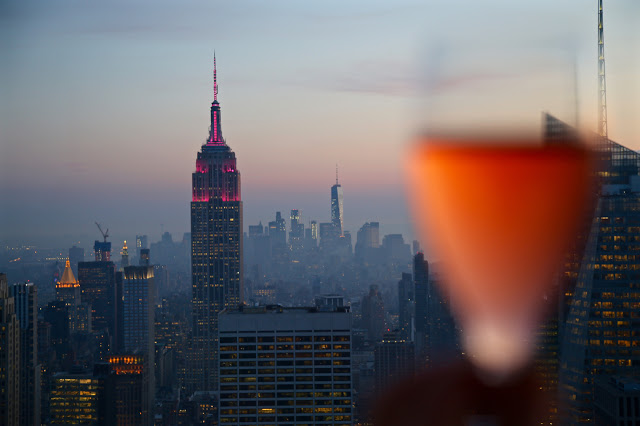 It’s really hard to do a ‘best of’ listicle about eating in Manhattan because most places are good. As fromager Tia Keenan said to me: ‘You can eat so well in New York, you can eat a different meal, three times a day, for years without repeating the same restaurant.’
I ate a bit randomly, not following a structured route. There were three places I wanted to try before I got there: Dirt Candy, byCHLOE. and Dominic Ansell.
Dirt Candy and byCHLOE are both vegetarian/vegan restaurants and Dominic Ansell, well- I wanted to try a cronut. The others I just sort of happened upon or was recommended.
Meatless cuisine is taken seriously in the states, unlike here.You have superb chefs and restaurants creating nose to tail vegetable dishes- for me a kind of culinary ecstasy.
One issue on this visit to Manhattan was how expensive it was to eat out. In previous years, New York restaurants have been very reasonably priced, but several factors listed below means that eating out in London is, by comparison, a bargain.

Another thing I noticed is that when you pay a bill, they arrive with their machine for your card, you punch in the numbers and they leave you a ‘check’. You then fill in the amount of tip. I spent the first few days impatiently waiting for the waiter to return and collect the check. They don’t, which I find disconcerting, after all they could write anything in that section, changing the numbers of the tip amount.

I think we should all be like the French and not tip at all. Food prices charged at restaurants should cover a living wage for employees. Furthermore tipping means that front of house are paid more than back of house employees, and New York restaurants are struggling to find chefs right now. Some restaurants are experimenting with service charges included in the food rather than tipping. 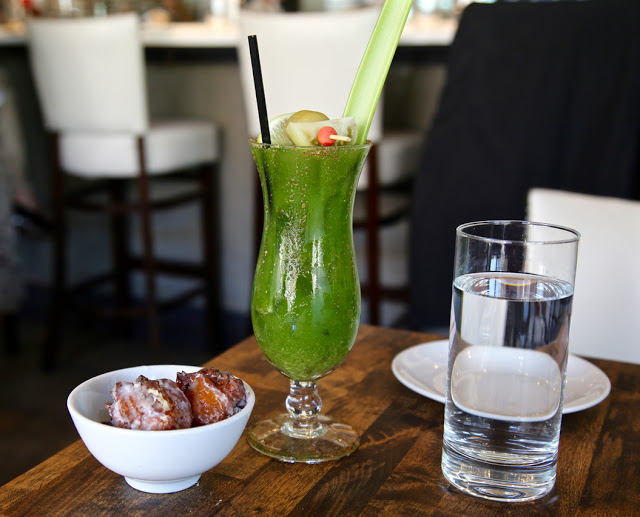 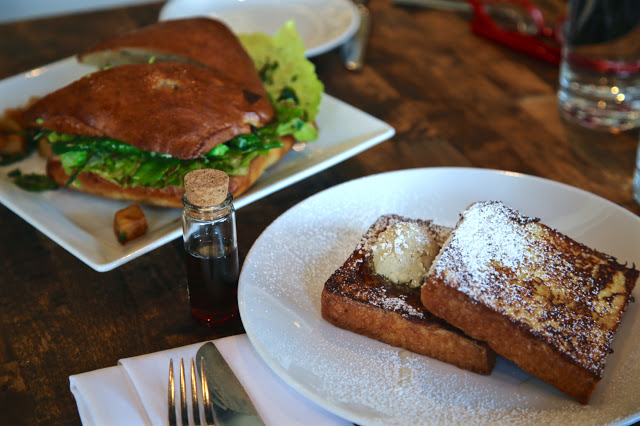 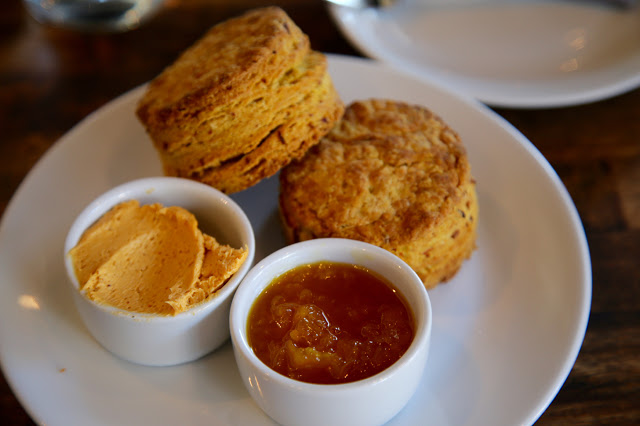 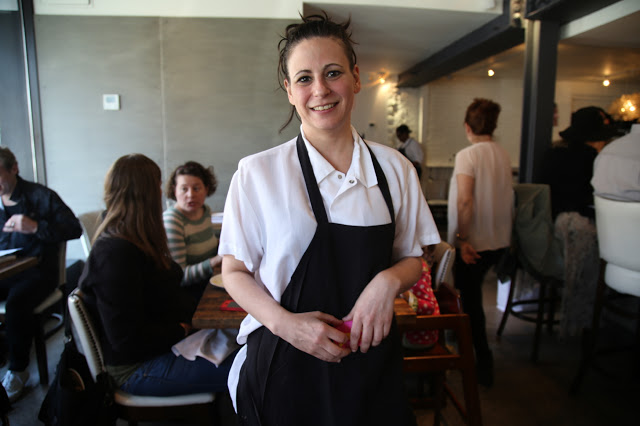 Oh my god this was just as good as I imagined – better, even. And chef Amanda Cohen was waiting on tables! And people ordered her about as if she were an ordinary person! W the actual F! I wanted to scream at them:

‘How very dare you! Do you not know you are making a culinary genius clear your plate? You ignoramuses! Apologise at once.’

But thanks to the presence of my much more sensible daughter, I managed to restrain myself.
I ordered the squash biscuits. Biscuits are basically American scones, but so much nicer – flakier, more buttery, imbuing a melt in the mouth divinity. I’m a convert. These were served with yellow pepper jam and pumpkin butter.
I also ordered savoury mini glazed red pepper flavoured doughnuts, corn French Toast, a ‘greens’ sandwich with crispy fried potatoes and an enormous spicy green Bloody Mary. Everything was AMAZING.
And then I met her and took a picture with her. I totally fan-girled over her. I want to be her. Ok, this is getting embarrassing.
I also love the fact that there is a no tipping policy, because Canadian Cohen pays her staff a living wage. 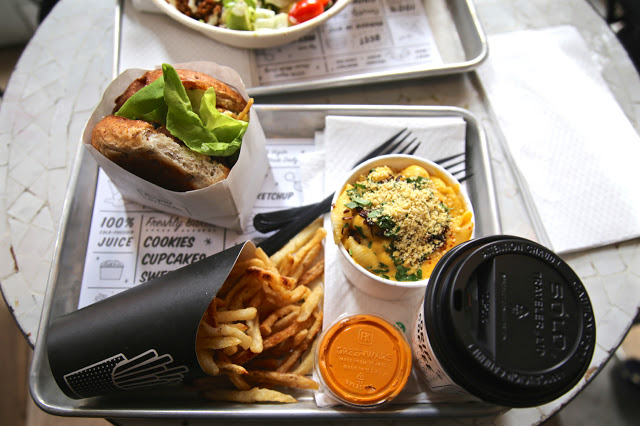 Fronted by the young and photogenic Chloe Coscarelli, this is a foray into vegan fast food that has succeeded very well. The menu is fun, quick, nutritional, flavoursome and cruelty-free! I had the guac burger, daughter had the mac ‘n cheese and we shared the air-baked fries (which arrived a bit cold but were not bad for a low fat version). We both enjoyed it and would go back. I’d like to do something like this in London. 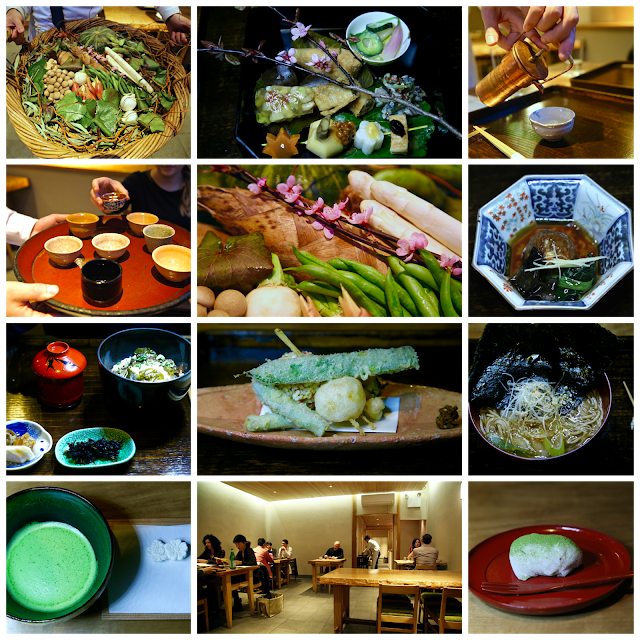 Kajitsu specialises in Japanese Buddhist vegan ‘shojin’ cuisine, with a series of small artfully presented dishes in the kaiseki style. I’ve always wanted to try a Kaiseki restaurant and this wasn’t too expensive at $95 per person for the ‘Hana’ meal comprising of eight courses.
At the beginning of the meal, the waiters display a basket of the raw seasonal ingredients that will be used in the meal, which in this case represented spring. Then we were asked to choose a vessel from a tray of different porcelain cups, some of which are hundreds of years old, in which they poured sake. The method of serving the food is as important as the ingredients and cooking.
The restaurant is housed in a typical New York townhouse and we ate at a window table on the first floor. The atmosphere and furnishings are spartan and calm, service is deliberate and ritualistic.
A fascinating experience. 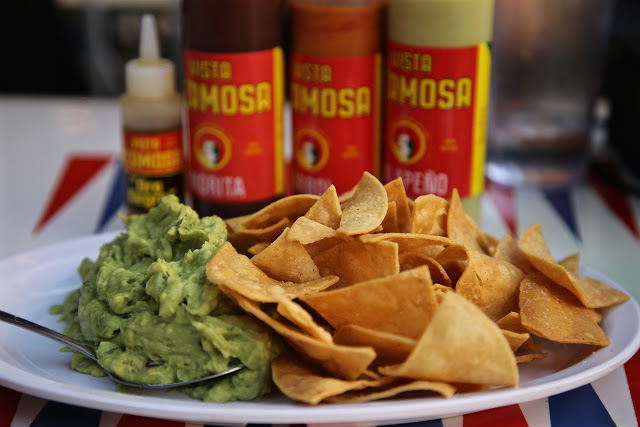 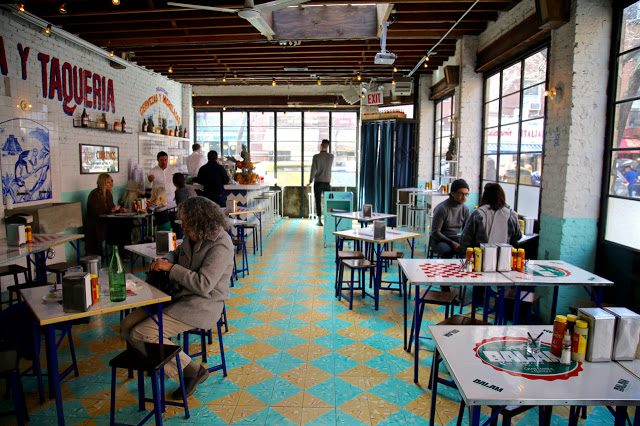 This beautifully designed Mexican restaurant on Bleeker isn’t cheap but serves delicious food and drink. Hard alcohol can’t be served because they are situated near to a church but I had a version of tequila, a fermented agave liqueur, in a cocktail. I ordered two types of tacos, fried fish and bean & sweet potato. The generous guacamole with totopos (fried tortilla chips to you) was terrific. It’s probably a tourist trap but I’d recommend the food. 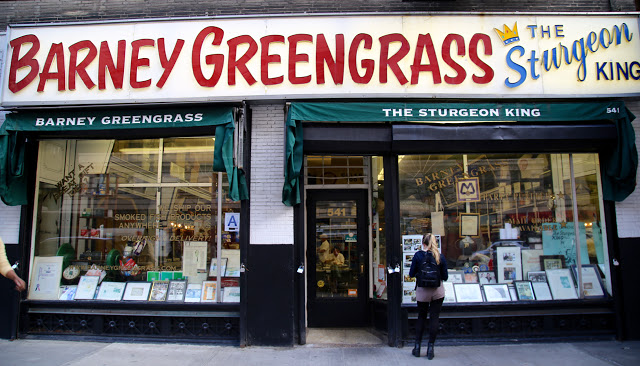 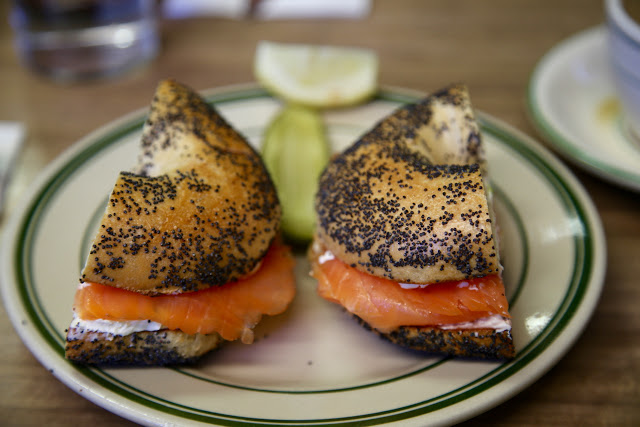 This bagel restaurant, located on the upper west side a couple of blocks from Central Park, has been a New York stalwart since 1908. Now third generation Gary is manning the main till. It does classic New York style bagels: large, fluffy, chewy, savoury. They pride themselves on not toasting them, ‘they don’t need it!’. Barney Greengrass is particularly known for their selection of smoked fish such as sable and Novia Scotia salmon.
Other bagel recommendations include Murray’s (best actual bagels), Sadelles (long wait, fashionable, get the Smoked Fish Tower), Russ and Daughters and the Montreal-style bagels at Black Seed. Read more about the difference between New York and Montreal bagels here. 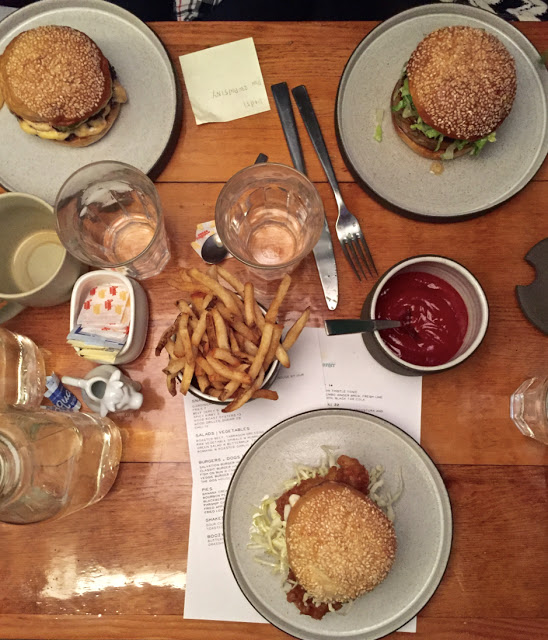 My recently widowed aunt took my cousin, my niece, my daughter to April Bloomfields’ restaurant. They kindly gave us an entire booth and let us sit there all afternoon. The food was not bad: highlights include the shakes, the fish burger, the fries, the creamy buttermilk and poppy seed dressing on the green salad, but the veggie burger was frankly disgusting. That needs work, it is misconceived. The fried apple pie, McDonalds style, didn’t quite work. I would have preferred an actual McDonalds one. 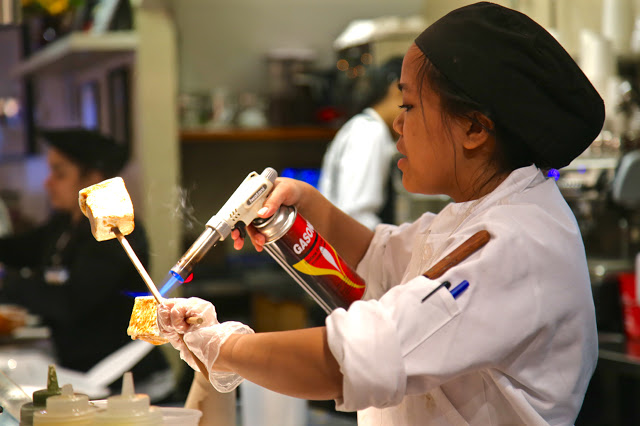 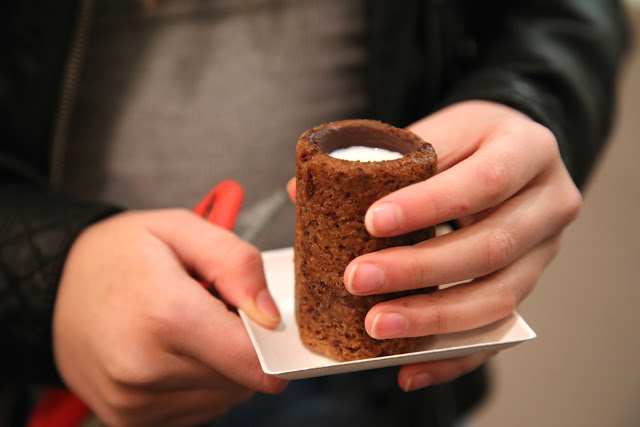 Reams have been written about social media star baker Dominic Ansell and his cronuts. I was game for doing the crack of dawn queue but having tried and failed to master the vagueries of the frustrating afternoon line for the ‘cookie shot’ (a cup made of cookie dough, filled with milk), I lost faith. I did try the much lauded frozen S’more (horrible) and the lacklustre croissant (my litmus test for a bakery is that their croissant should be superb – if they can’t do that, they can’t do anything). Maybe the cronut is life-changing on a patisserie level, who knows? Not wasting several hours of my life to find out. I’ll leave that to the mode-driven millenials for when they fall off the clean eating bandwagon. Disordered eating much?

Bar Sixtyfive at The Rainbow Room 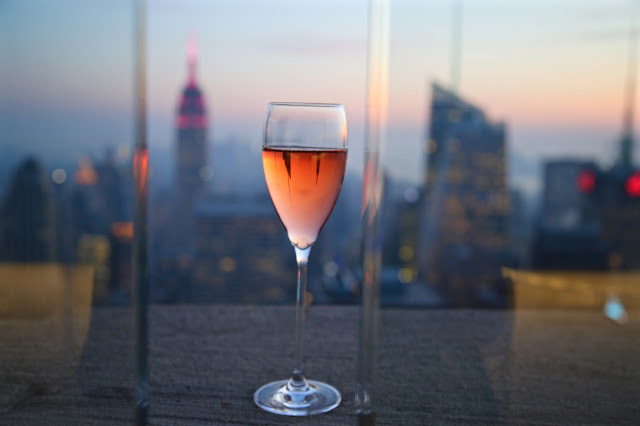 This is a very touristy thing to do in New York, but actually not too many tourists seem to know about it. Located at the top of the Rockefeller building, your coat is taken by the hat check girl before you ride the elevator up. The thing to do is to go at sunset: pearlescent sky scrapers and neon-lit buildings silhouetted against peachy skies. Have a glass of pink champagne and take some selfies. Wear nice clothes and book. Ditto for the restaurant, which isn’t cheap but has live music. 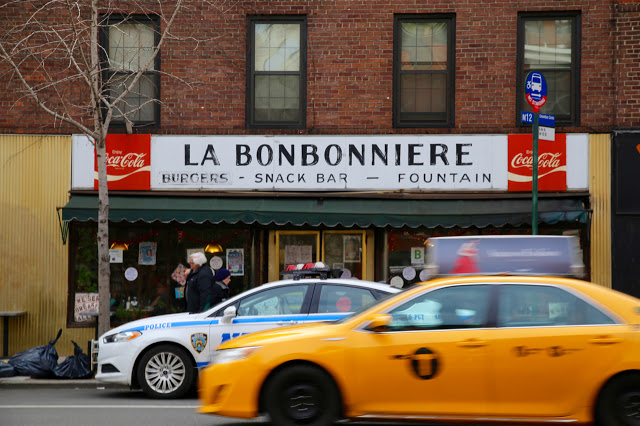 Old style New York diner, full of characters and actors (both resting and famous). I loved it. Read more about the ‘bonbon’ as locals call it, here in my piece on nearby Jane hotel. 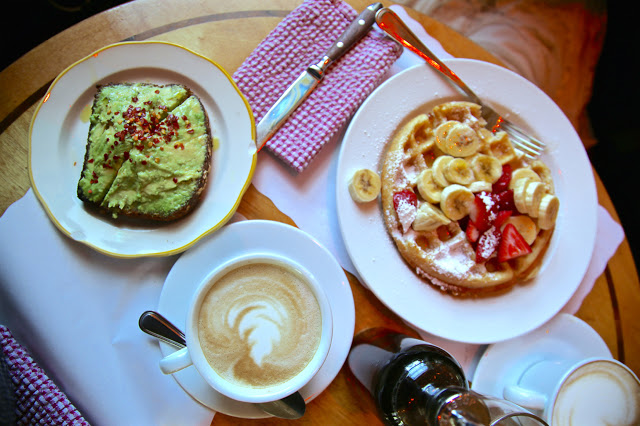 This trendy cafe is apparently the original source of the avo-toast recipe, which is now ‘overcado’ on Instagram. I’ve been eating avocado on toast for years and it’ll never be over for me. How can two basic ingredients be a matter for fashion? I ate in the super trendy Jane hotel branch. The first time I thought it was expensive but then I realised the prices were the norm.
On the second visit, I was tapping away on my laptop vaguely aware of two ladies sitting at the next table when my daughter announced:

‘Mum, you need to be friends with these women.’

I started to eavesdrop on their conversation: they were funny, outrageous, crude, rude, loud, colourful and vibrant. They sounded like American versions of me. So I introduced myself by repeating what my daughter had said. It turned out that they were professional body painters. They paint baby bumps, children’s faces, makeup for films and TV. One gave me a little cock – a small plastic chicken, her calling card. I’d like to be painted nude by them, a vegetable, perhaps an artichoke: all spiky but with a tasty heart.