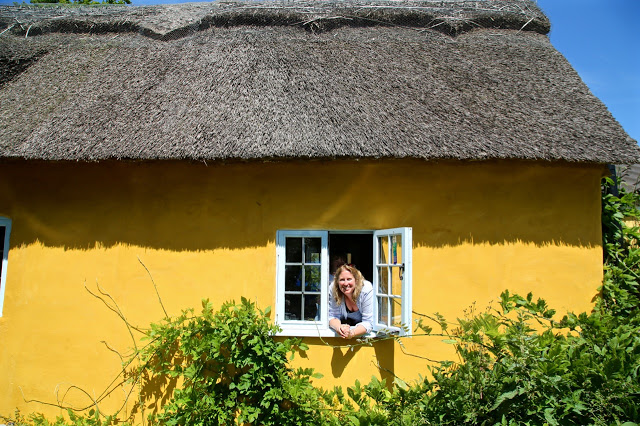 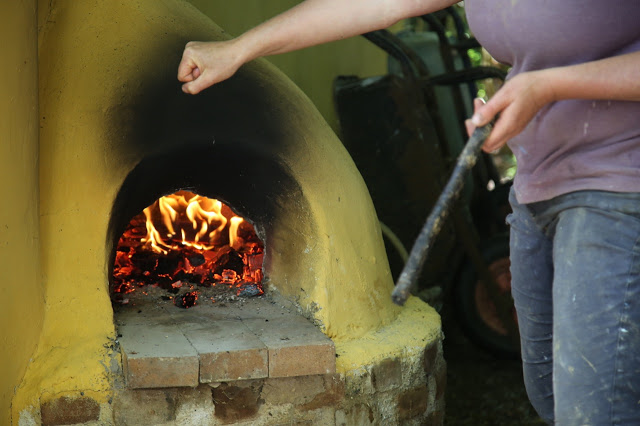 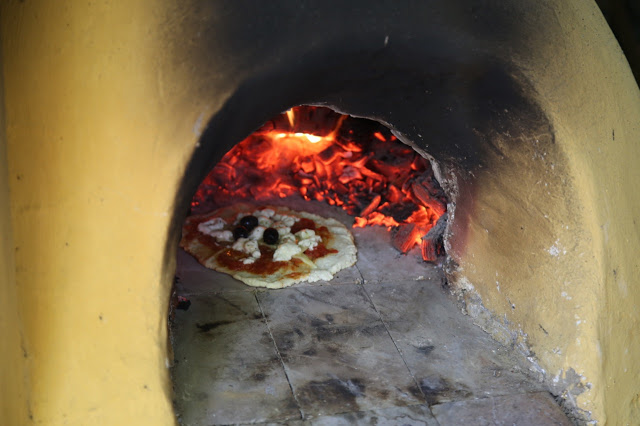 ‘If you can leave your hand in for a second it’s not hot enough.’

We arrive at White Cottage in Norfolk just in time for homemade pizza fresh out of their cob oven, which has now reached a roaring 700°F (370°C). This oven is built from the cheapest materials: sand, clay, straw. I was supposed to arrive at 10 in the morning but, due to a feverish night, I’m only able to get there for lunchtime after taking paracetamol to stop the shivering. We stayed at Woodland Lodges, a peaceful lakeside retreat at Fritton filled with dappled meandering woodland paths, deer and rabbits.

While I’ve always liked Norfolk – white beaches, good food, weird people – I’ve never been to the broads before, and would love to spend time reading and cooking on a canal boat on the watery network.

Charlotte Eve and Kate Edwards live in a picture book (yellow, not white) thatched cottage and run courses on how to build a cob oven, a technology that can also be used to build houses. Charlotte opened a window in her cottage kitchen, which then functioned as a serving hatch. We collected our pizzas from there to be baked in the oven.

Around 15 people attended the course, evenly divided between men and women. What did surprise me was that the women were more hands on than the men.

Step by step recipe for building a cob pizza oven

1. Build a brick, wooden or stone base

Think about the height so you want a level where you can feed the fire, add and remove pizzas and operate bellows while sitting down. Diameter: a 1m diameter base will allow for cooking one pizza at a time. It needs to be strong to support the weight of the oven. You can make a cob base, which is very strong. The base must be weather proof and level. 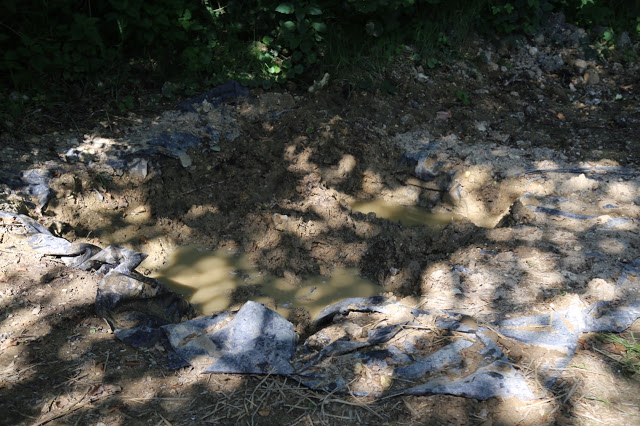 2. Mix 1 part clay to 3 parts sandy subsoil by adding water and doing the cob dance (which entails jumping up and down on the pile).

3. Do 4 big mixes and in 2 of them add some straw (1 part) as well. Keep turning the big piles of cob, adding water and stamping. 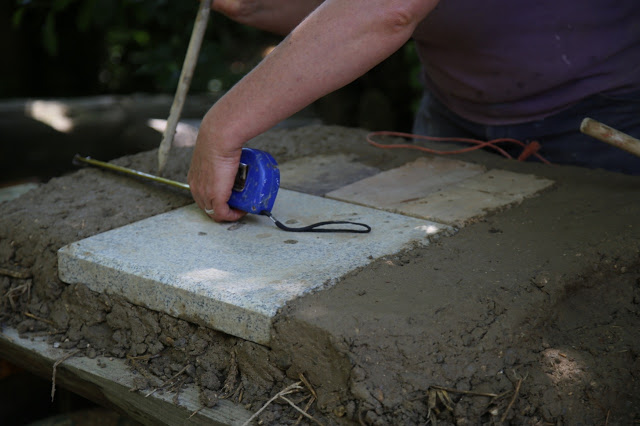 4. Lay the cooking surface level on the base. Use fire bricks or marble/granite. 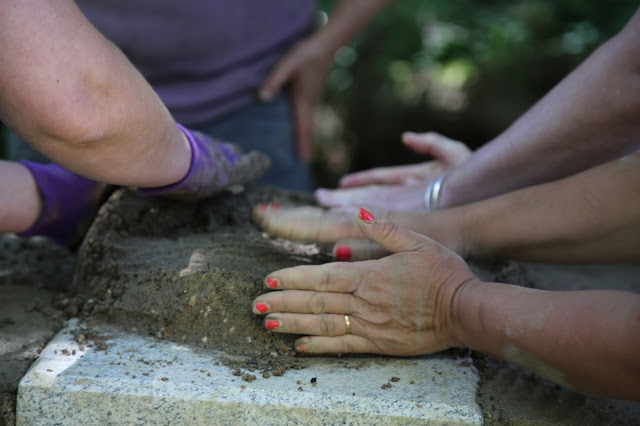 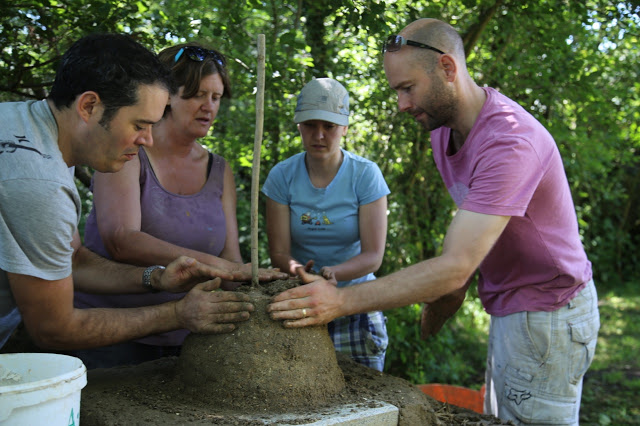 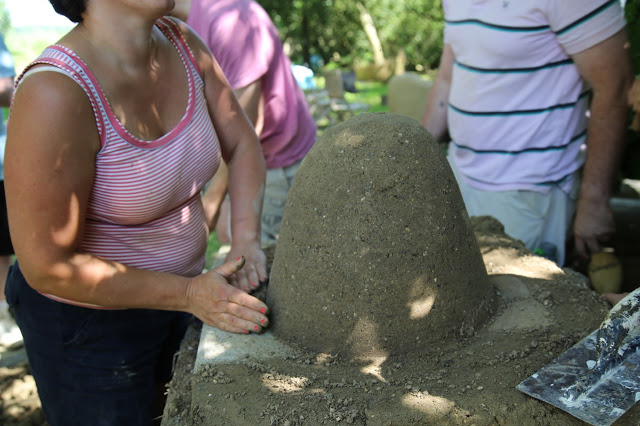 4. Sculpt your oven around a dome of sand (use sharp sand and water to make it stick) which sits on the fire bricks. Smooth it over with a trowel. You don’t want irregularities because the oven will then have air pockets and cool parts.

5. Build around the sandy dome by making cob bricks, the size of your palm, with your hands. The first layer is the cob without straw and the second is the cob with the straw (this insulates the oven). The wall must be at least 7 inches thick. Completely cover the dome. When it comes to the smoothing process, the women took over while their hubbies stood by, watching, chatting about plasterers and how they don’t notice the finer details. The oven was smooth as an egg by the time they were done primping.

“Not that we’re perfectionists!” said one.

6. Cut out a space for the oven door
Make a semi circular oven door from hardwood. The door must be 63% of the internal height. Use it as a template to draw around it in the cob. Cut into the cob with a trowel. Make sure the door fits perfectly so that you will have a good seal.
Leave it to dry for two days.
When using the finished oven, soak the door in water then press it into the door space. This ensures that the heat is absorbed into the bricks.
7. Pull out the sand
Kate demonstrated how to dig out the ‘former’ (think the opposite of a mould), which we would usually do after leaving it a couple of days. The men became much more engaged when it involved fingering sand out of the oven and bandying innuendos about.
Leave for a week to dry out.

Kate showed how, with a mallet, you could put tiles on the oven to make a mosaic exterior. Whether you want to add colour or not, making it into a sculpture is a fun idea.

“You can do a dragon very easily.”

Using a stick to bond it to the layers below, a nose was stuck on, followed by eyes, ears, lips and spikes. For fish fins and other more extended appendages, sticks can be inserted and left in place.

When creating a dragon oven, the nostril holes can go right through to create an even more impressive fire-breathing beast. In fact, this really improves the draw.
When the women went arty, the men again stood back and watched.

“Some of us stand with hands in pockets, we know our place.”

“Hand it over to the wife,” added another.

Red nails were added to the dragons claws, then ‘eyelashes’ with branches.

9. Fire it up for 1 day
Ignite kindling and keep the fire going for at least six hours. You should be able to see the moisture from the cob.

10. Final coat of cob
The oven now should be sealed either with more cob (without straw), fibre chalk or lime.

Then your oven is ready.

Maintenance: cover the oven when it is not in use. If it cracks, add more cob.

Afterwards, the group settled on the grass with homemade flapjacks and cups of tea, bits of advice were shared. Don’t stay in Great Yarmouth. If forced to visit ‘Yarco’ (as it is apparently nicknamed), get curry at Planet Papadum. For the best fish ‘n chips, visit Grosvenor Fish Bar in Norwich. 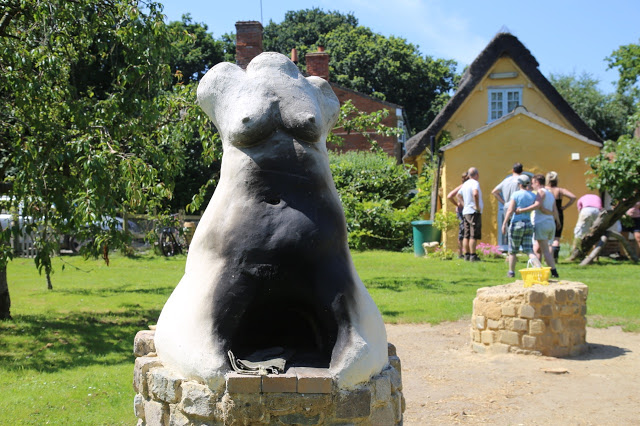 Above: their vagina pizza oven, which is based on the Gaia sculpture on the Isles of Scilly.

Gently fry the onion in loads of good quality olive oil – do it really gently until slightly caramelised.
Add some crushed garlic, really good quality tinned tomatoes and a tiny touch of sugar.
Cut a chilli in half and throw it in the sauce.Add a big bunch of basil to the sauce.
Salt and pepper.Simmer gently and let it reduce slowly.Remove the chilli and basil.Spread it on the pizza bases.
Tips:Add your cheese – not too much – the pizzas cook so quickly in the cob oven that the cheese won’t have time to melt before the base is cooked if there is too much cheese.Add dried herbs.
A drizzle of rapeseed garlic infused oil is great.Avoid fresh basil before cooking – it wilts and burns up.
Toppings like mushrooms and peppers should be roasted first otherwise they release water onto the pizza. The pizzas should cook and puff up (see below) in 1 minute in the oven. 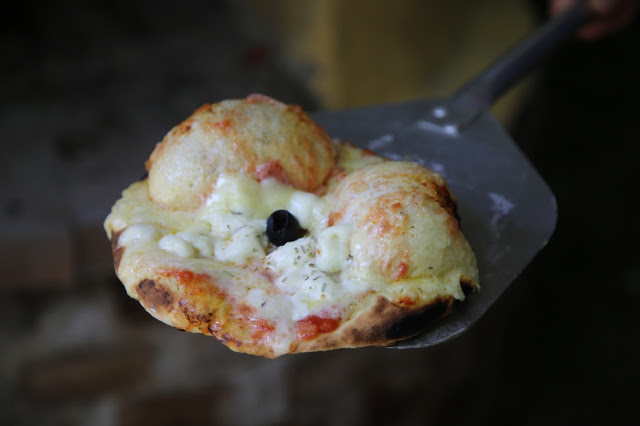 Obviously the best way to learn to do this is to attend a cob oven building course. Cost for a one day course and lunch is £120 per person. They also teach how to make a cob tandoor oven.

Thanks to Sienna for co-authoring this piece.

Previous Post: « Taste the world at Womad
Next Post: A load of cobblers – fruit recipes for summer puddings »